Add an Event
Newswire
Calendar
Features
Home
Donate
From the Open-Publishing Calendar
From the Open-Publishing Newswire
Indybay Feature
Related Categories:
Action for Local and Global Justice: Ken Saro-Wiwa
by David Hanks/Global Exchange (david [at] globalexchange.org)
Sunday Nov 11th, 2001 11:05 PM
Ken Saro-Wiwa: "...be ready to suffer arrest, detention, imprisonment, and death; as the only alternative to the struggle is extinction..." 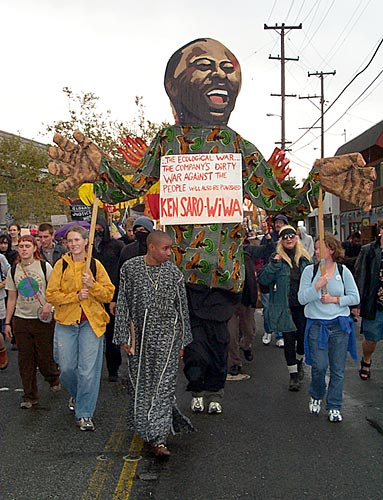 Richmond, California -- Two years after its defeat in Seattle, the World Trade Organization is meeting again in Doha, Qatar. In response, people across the globe are localizing their resistance to once again stop the WTO's destructive "free trade" agenda.

In Richmond, hundreds of activists marched two miles from the BART Station to Chevron's Point Richmond oil refinery. Petrochemical giants like Chevron epitomize the corporations that benefit from the WTO and its "free trade" policies, devastating local communities and environments from Richmond and the Bay Area to Nigeria and around the world.

The day of the march also marked the sixth anniversary of the execution of Nigerian environmentalist and Ogoni leader Ken Saro-Wiwa, who fought against multinational oil companies in his homeland. He was hanged under the "Treason and Treasonable Offenses Decree of 1993," (also known in Nigeria as the 'Ken Saro-Wiwa Decree') which states the anyone "who utters any word, displays anything or publishes material which is capable of breaking up Nigeria...is guilty of treason and liable on conviction to be sentenced to death."

Saro-Wiwa actively defended the Ogoni people of the Niger Delta against multinational oil companies which have wreaked havoc in Nigeria. The area is an environmental disaster, and oil companies routinely assist Nigerian police and the military to crush community protests, which often end with numerous civilians deaths. Ken Saro-Wiwa did not fight for human rights with guns or machetes; he wrote a Bill of Rights that the Ogoni people presented to the Government of Nigeria and the oil companies. He was charged with treason, and on November 10, 1995, was hanged with eight other human rights activists.

Suanu Bere (center) now lives in Oakland, but is originally from Ogoni, Nigeria, "came to this protest to remember the nine activists that died in the struggle, including Ken Saro-Wiwa." He said, "I want to thank the human rights activists with Project Underground for organizing this day, that we may protest and go to Chevron, to let them know what is happening to the people in Ogoni and Obigbo where they are drilling oil - without doing anything to help (the people who live there). I would like the world to know what is happening to my people and to all people where they are drilling oil. I am from Ken Saro-Wiwa's home, where they are oppressing my people. I know what has happened, why my people suffer - because of Shell and Chevron in Nigeria. They have terrorized our home for more than 40 years and they have never done anything for my people. I'm telling the world: come and learn what Shell and Chevron are doing to us. They are killing my people."

(The following is the 1996 poem written by A. Rowell in memory of Ken Saro-Wiwa. This poem was posted behind the depiction of Saro-Wiwa):

That he should be jailed
And tortured
For loving the land
The earth
And crying out at its
Defilement
Is monstrously unfitting.
We live in unnatural times;
And we must make it
Natural again
With our wailing.

For unnatural times also become
"Natural" by tradition
And by silence.
That is why the lands
Today ring with injustice
With lies
With prejudice
Made "natural."

The earth deserves our love.
Only the unnaturals
Can live so at ease
While they poison the lands
Rape her for profit
Bleed her for oil
And not even attempt
To heal the wounds.

Only the unnaturals
Rule our lands today
So deaf to the wailing
Of our skies, of the hungry,
Of the strange new disease
And of the dying earth
Bleeding and wounded
And breeding only deserts
Where once there were
The proud trees of Africa
Cleaning their rich hair
In the bright winds of heaven.

That he should be jailed
For loving the land
And tortured for protecting his people
And crying out at the earth's defilement
Is monstrously unfitting.

And we live in unnatural times.
And we must make it
Natural again
With our singing
And our intelligent rage.

-- A. Rowell (1996)
http://www.globalexchange.org
Add Your Comments
Support Independent Media
We are 100% volunteer and depend on your participation to sustain our efforts!