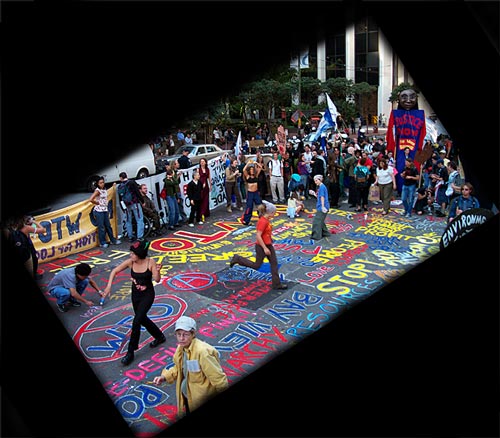 San Francisco -- Two years after its defeat in Seattle the World Trade Organization (WTO) is meeting again in Doha, Qatar, in the hopes of shutting out massive global opposition. Today, in response, people across the globe are localizing their resistance to once again stop the WTO's destructive "free trade" agenda.

In San Francisco, hundreds of activists marched down Market Street to the headquarters of the Pacific Gas & Electric Company where they took over the street, painting it with messages about dozens of subjects, including: corporate greed, stopping the WTO, environmental racism, and public control of energy resources. Activists drew ties between the ways that corporations are devastating both global and local economies.

The Pacific Gas & Electric Company was targeted because of their opposition to a publicly controlled municipal utilities district with elected officials in their hometown of San Francisco. Corporate executives of PG&E want to maintain their privatized system which ran virtually out of control last summer when rates increased over 200%. This, in spite of the fact that top executives were given $17.5 million in bonuses just before PG&E filed for bankruptcy last April.

On Saturday, November 10, many of the same activists will show support for the local environmental justice movement's fight against toxic pollution from Chevron and other industries across the Bay in Richmond, Petrochemical giants like Chevron epitomize the corporations that benefit from the WTO and its "free trade" policies, devastating local communities and environments across the globe from Richmond and the Bay Area to Nigeria and around the world.

November 10 is the anniversary of the execution of Nigerian environmentalist and Ogoni leader Ken Saro Wiwa who fought against the multinational oil corporations in his own country. On the agenda for the WTO meeting in November are ways to expand corporate control over energy -- including oil. (Photo: David Hanks, Global Exchange; Story: David Hanks / http://www.globalizethis.org) (Friday 9 November 2001)
http://www.globalexchange.org
Add Your Comments
Support Independent Media
We are 100% volunteer and depend on your participation to sustain our efforts!