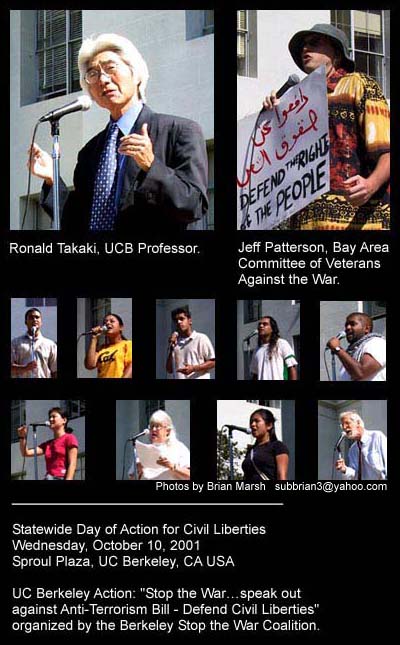 Speakers and Quotes from the Speak-Out:
---
“Liberty is like a muscle - you use it or you loose it.”
Osha Neumann, with the National Lawyers Guild.
---
Snehal Shingavi, with Students for Justice in Palestine (SJP), talked about his concern that anti-terrorism bills will be used to “criminalize decent” and further stated, “We know that when ordinary people see what’s going on they will know that their interests do not lie in going to war.”
---
“Some people say I’m a traitor. That’s true - I’m a traitor AGAINST THE U.S. WAR MACHINE.”
Jeff Patterson, with the Bay Area Committee of Veterans against the War, as a U.S. Marine - he was the first to refuse to serve in the Gulf Massacre (Gulf War).
He mentioned that the U.S. war machine and sanctions have killed 1.5 million Iraqis. Referring to those in the U.S. who resist the war machine he said: “We’re giving the people of the world a reason not to hate the US.”
---
Other speakers:
Ronald Takaki, UC Berkeley Ethnic Studies Professor
Wajahit Ali, Board Member of Muslim Student Association
Sajid Khan, Associated Students of the University of California (ASUC) Senator
Judy Shattuck, Coalition of University Employees
Monica, Asian Pacific Islander (API) Force
Kyung Lee, Asian Law Caucus
Diana, La Raza Community
Micah, Berkeley Stop the War Coalition.

For more information or to get involved:
Berkeley Stop the War Coalition
stopthewarcoalition [at] onebox.com
(510) 343-2139 x5412
Add Your Comments
Support Independent Media