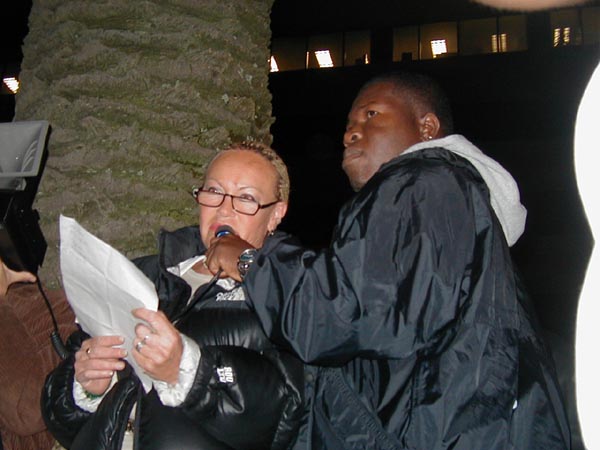 Hundreds gathered at Snow Park in Oakland to mourn, provide support for each other, and speak out against violent United States policies at home and abroad on Wedsnesday, September 12th, one day after unprecedented terrorist attacks in New York City and Washington DC. A growing climate of racism, nationalism and anti-Arab bigotry was a focus of the rally.
http://www.indybay.org/features/police/
Add Your Comments
§what did Idriss do
by no
Thursday Sep 13th, 2001 3:18 PM
what happened to Idriss? Did Idriss break the law? Did Idriss resist arrest? You can't play the race card forever.

Add a Comment
§what idriss did
by anon
Thursday Sep 13th, 2001 3:37 PM
do your own homework, no. this site has plenty of information about it.
Add a Comment
§Yes, let's play basic questions...
by Mesha
(meshairizarry [at] hotmail.com) Saturday Sep 22nd, 2001 12:33 AM
Dear "no"
If documenting yourself on my son's case might feel too fastidious, let me reframe it for you in a more simplistic context:

1) Did you ever lit up a cigarette in an objectable place?

2) Did you ever get cornered by 9 police officers with shot guns, & bullet-proof vests while you were ALONE in an emptied theater?

3) Did you feel the impact of the 27 bullets that they enthousiastiacally pumped into your body?

4) Upon dying, did you feel that your "offense" deserved lethal display of force?

The "card" that is played is repeated, intolerable brutality perpetrated against people in mental distress. One might wonder, though, why people of color seem to be more at risk, i.e: the naked, confused African American man gunned down by Bart Police (1 week after the death of Idriss); justificating comment of the officer (quote): "He had this look on his face as if he wanted me to shoot him"...

5) Do you feel that 9 officers simultaneously convinced themselves that Idriss was begging them to shoot him, therefore generously abided by his wish?

If it is so, I commend you for your astuteness.

http://wwwidrissonelove.com
Add a Comment
§What Look
by Mary
(madurrah [at] hotmail.com) Saturday Dec 8th, 2001 2:10 PM
I don't belive a look can make a person do something like that.If anything they should have tryed to talke with him.We are loosing to many of our babies because they look a certain way or act a certain way,I thought this was a free country.
Add a Comment
§Concerned
by Jamie
Thursday Mar 28th, 2002 9:21 AM
I just wanted to send my sympathy , I'm a highschool student who in law class is doing a IRP on police brutality because it is an on going matter in our societies and i support your ralleys all the way!
Add a Comment
Support Independent Media