Add an Event
Newswire
Calendar
Features
Home
Donate
From the Open-Publishing Calendar
From the Open-Publishing Newswire
Indybay Feature
Related Categories: Police State & Prisons
Police Abuses at Sacramento Critical Mass
by Jason Meggs (jmeggs [at] bclu.org)
Sunday Sep 9th, 2001 12:36 AM
Sacramento, the State Capitol. Two groups came from the Bay Area, one by bicycle (lead by Assembly candidate and Berkeley City Council Member Kriss Worthington, and one by Amtrak) to help protect and defend the efforts at holding a Critical Mass community bicycle ride there, after doing political groundwork to help ensure that police would stop the ongoing abuses (see previous stories). No such luck. 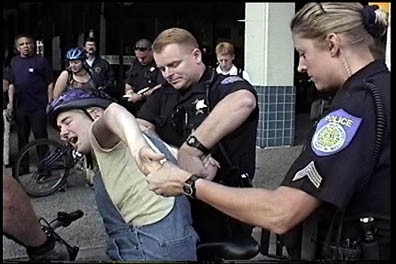 Is it the Capitol of Car-ruption? Of conformity? Of corporatism?

Trying to put the best effort forward, Bicycle Civil Liberties Union activists had called for changing the starting location to the steps of the State Capitol, and acquired a permit for a rally for alternative transportation before the ride. We even had two groups coming from the Bay Area, one by train and one by bicycle! We had met with City officials, spoken with City Council, filed Office of Police Accountability (OPA) complaints for some past abuses, and had spoken with the police Captain for the Metro Division. We were promised that we could hold a community bicycle ride and would not be ticketed unless we broke the "rules of the road".

Uncounted citations and at least one rather cruel and unusual arrest later (see photos), it is becoming evident that Sacramento Police Department is accountable to no one, and that while the car critical mass may proceed unchecked on a daily basis, the nonviolent, peaceful, healthy, people-powered modes of transportation will be persecuted.

A much more complete account and many photos are posted at the site automatically linked from http://www.bclu.org/sactocm/

Come out next month!

There may be a ride, but there will definitely be an Amtrak group. Come to the Emeryville Amtrak station at 1:30 PM (to coordinate boarding and discount tickets for the 2 PM train) on the first Friday, October 5, 2001. Emeryville station is roughly downhill from the Ashby BART station, take MLK or Adeline South, turn left onto Adeline/Stanford just past where the BART tracks come out of the ground, follow Stanford all the way down past San Pablo, and just past Hollis before the overpass turn right at the sign for Amtrak. Alternately, get off Macarthur BART and take 40th to San Pablo, turn right, go to Stanford, turn left, to the Amtrak sign. Yes you can go at other times, ride alone, or get on at other stations, but it's a lot cheaper if we get you a discount ticket.

One ironic thing: the television news media was upset with us for changing the route after police abuses began. Yet he refused quality hi-8 footage of the arrest (see photos on http://www.bclu.org/sactocm/).
http://www.bclu.org/
Add Your Comments
§Rally at the capitol
by Teresa (makeler [at] aol.com)
Sunday Sep 9th, 2001 11:18 AM
My son happened to be at the rally at the capitol. He was not a demonstrator. He just happened to be there. He witnessed an abuse that upset him. He noticed that police were targeting passers-by on their bicycles.

The abuses by the Sac PD are continuing. There is no excuse. Cyclists are peace loving people who ride for exercise and transportation. Given the current problems with pollution and fuel, they should be given rights afforded to those who wish to help.

Keep up the good work!

Teresa Jones
Add a Comment
§Re: Rally at the capitol
by Ryan
Sunday Sep 9th, 2001 10:57 PM
Hi! Yes, the police did take my sound system and write me a ticket (3 actually). I'm not sure why they took the system. I think they are under the mistaken impression that we will go away if they take our stuff...they're not very bright.

Yes, the equipment they took is very valuable. It is worth about $5000. However, the bicycle revolution will go on! We have many, many speakers and many, many bicycles. We'll have a similar sound system at Berkeley Critical Mass next Friday 2001-sept-14.

Neither rain, nor sleet, nor snow, nor sergeant Gravert, nor officer Chase, nor any other corrupt officers of the law will stop the bicycle revolution.

BTW, I'm not poor. But, if you'd like to send a donation it will be used to fight the injustice in Sacramento and defend those the police attacked. You can send checks to:

The check should be made out to "BCLU". Please write "sacto-cm" somewhere on the check.

Add a Comment
§Fascism at Work
by Anti-Fascist
Monday Sep 10th, 2001 7:07 PM
These incidents, the THEFT of sound equipment and ILLEGAL FALSE ARREST and TORTURE of a woman is yet more EVIDENCE of FASCISM REARING ITS UGLY HEAD in this society. It is clear that INTERNATIONAL PRESSURE must be brought upon these GOVERNMENT AGENCIES to HOLD THEM ACCOUNTABLE and in compliance with INTERNATIONAL HUMANITARIAN LAWS!
Add a Comment
§Sick Sack Toe PoPo
by matt d. (mdodt01 [at] ccsfbay.org)
Thursday Sep 13th, 2001 6:37 PM
-More and more, what has been happening at Sacto Critical Mass is reminding me of the much-publicized San Francisco crackdown on Food Not Bombs which took place in late 1993 into 1994, when Frank Jordan was mayor. It's kind of a hard comparison to make, as Food Not Bombs food sharing took place every day, while Critical Mass only happens once a month, but the police (over)reaction to it make that comparison relatively easy. This was my 3rd Sacto ride, and judging from the police behavior on the previous 2 rides, I began to suspect that the police were going to start getting physical on either this or next month's ride, and unfortunately I was right. And pessimistically furthermore, it may get worse next time. That's why we need more people, more people knowing their rights, and more people willing to stand up for them(selves). That's the whole purpose of state
-sponsored terrorism against activism is designed to do: scare us off. We don't have to let that happen, and the Pantheon knows that the dissention within our own ranks that I've just found out is happening will only make things way worse. We don't have to be dissolved, either from within or without. Remember, in spite of their efforts, Frank Jordan and company are no longer around, but S.F. Food Not Bombs is.

Bike out,
matt d.
http://hills.ccsfbay.org/~mdodt01/
Add a Comment
§Solidarity
by Mike
Saturday Sep 15th, 2001 11:43 AM
I know how you feel. The internal-combustion bigots can be pretty mean. Don't stop riding!

Read about what happened to CMers in LA in 2000. And find out what we're doing about it.

MsB
http://www.criticalmassmedia.org
Add a Comment
Support Independent Media
We are 100% volunteer and depend on your participation to sustain our efforts!