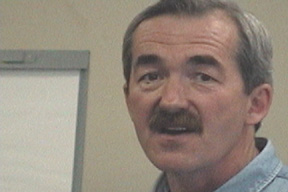 The Tom Leedham Slate has presented a resolution to this 2001 Convention calling on Hoffa to make good on his promise, to increase strike benefits by August 1, 2001. Hoffa, on the other hand, proposes to “study” the issue. This, with a UPS contract negotiation only months away.

As the convention debated this issue on Tuesday, Tom Leedham came to the microphone. Watch what happened at:

(This video stream report was prepared by William Jenkins of Labor Beat and Tom Sheibley of the Leedham campaign web site.)

LAS VEGAS -- The Hoffa Unity Slate may be considering a name change after split in its ranks at the IBT Convention today. The Hoffa forces put forward six candidates to fill only five at-large Vice President positions.

Pro-Hoffa delegates were visibly bewildered by the split in the Hoffa ranks. The sixth candidate, Dave Robinson from Local 486, was nominated in a maneuver to knock off Hoffa Unity Sltate member and current Teamster Vice President Tom O’Donnell.

Earlier this month, O’Donnell threatened to bolt the “Unity” Slate and run his own slate over Hoffa’s broken campaign promises and his heavy-handed treatment of General Executive Board members.

O’Donnell was prevented from forming his own slate by the election rules. He remains on the Hoffa Slate, but he will be opposed by Robinson, another Hoffa candidate, who will be running as an independent.

In contrast to the disunity in the Hoffa ranks, Teamster reform forces are more unified than ever. St. Louis 610 principal officer John Metz, who ran a third slate against Hoffa in the 1998 election, was nominated today as an at-large Vice President on the Tom Leedham Rank & File Power Slate.

Metz’s nomination as a Rank & File Power candidate marks the unity of the reform forces that took 46 percent of the vote in the 1998 election.
http://www.leedham.org/leedham_at_mike.ram
Add Your Comments
Support Independent Media
We are 100% volunteer and depend on your participation to sustain our efforts!