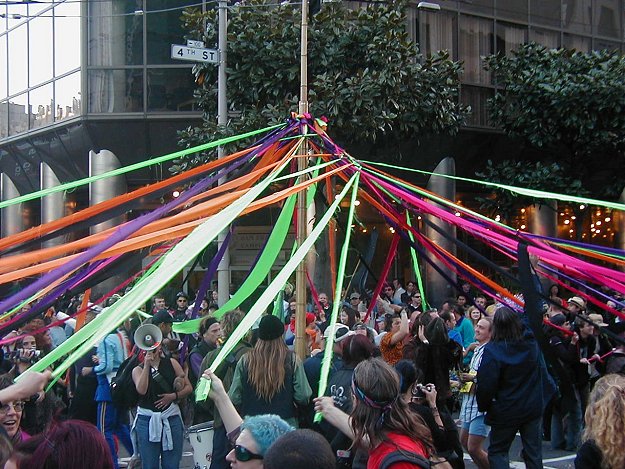 http://www.indybay.org/features/labor/
Add Your Comments
§ecstatic maypole dancing - yay!
by Jack Yerbody
Wednesday May 23rd, 2001 11:32 AM
Yay! It was so much fun to see ecstatic maypole dancing IN THE STREET! and you can't see it in the photo, but there's a black flag at the top of the maypole as well. :)
Add a Comment
§mayday flyer text
by Jack Yer Body
Wednesday May 23rd, 2001 12:44 PM
this was a version (probably not the final one) of the flyer that was handed out on mayday:

May Day began as an earthy, sexual carnival, celebrating the fertility of the earth and our lives and stimulating the earth for a bountiful harvest. It was a celebration of Spring, of flowers, of the green of fields and woodlands, and the one festival the church and other authorities could never quite control. It was a day to feast, drink, dance, and fuck.

The church and the state rejected and repressed this celebration of our relationship to the earth, to spring, and to each other. They banned the May fairs and games and cut down the maypoles.

But May Day’s unruly nature would not be tamed! In the 19th century it became a focus for the campaign to reduce working hours, and on May Day in 1886, an estimated 500,000 workers across the county went on strike for an eight-hour workday. On May 4 in Chicago, in response to a police attack the day before on a peaceful rally of strikers where they killed six workers, there was another rally at Haymarket Square. Dynamite exploded in police ranks, and despite the fact that most of them weren’t even at Haymarket, and the rest were in plain sight on the speakers’ platform, eight anarchist labor organizers were framed for the attacks. One committed suicide in his cell, four were hung and the remaining three were only pardoned after many, many years. May Day was later named International Workers’ Day to commemorate this struggle.

We celebrate May Day now combining both traditions in order to evoke our past, our ancestors and our resistance. May Day helps us keep the fire alive as we keep our communities strong in the face of an ever destructive market economy, and as we fight for our earth, our people and our future.

So today, on May Day, we take back the streets from cars and corporations, for pleasure over profit, exhilaration over exhaust, delightful disobedience over despair! There is joy in taking space, without paying, without asking permission, gathering together freely, taking direct action. It is an act of asserting our freedom to assemble, particularly our right to dance together in space outside of commerce.

For they have tried to stop our dancing – for hundreds of years our dancing and drumming and songs of resistance have been silenced and suppressed. Let us dance in the face of adversity, in the face of the forces that seek to keep us apart, isolated, and indoors. Let us dance to replenish the life-energy that is sucked out of us each day at work. This is a chance to celebrate our resistance and celebrate the joy of being alive,. Ah, Spring.

So if you’re not in the streets yet, come out and play! Come mingle and play and party with intent: to bring back life to the earth where capitalism has wrought death and destruction; to take back our bodies and our lives from the machines of destruction; to dismantle and destroy patriarchy, capitalism, white supremacy, and all other forms of domination; and to create a sustainable society based on mutual aid, cooperation, solidarity and self-determination.