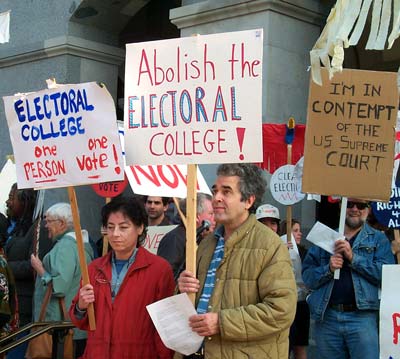 Citizens Protest at Capitol as Electors Cast Their Ballots

Citizens' Groups Gathered to Demand the Abolition of the Electoral College, Clean Money Elections, and an End to Racial Discrimination at the Polls

Sacramento — On Monday, December 18, nearly six weeks after election day, California’s 54 electors gathered at the state Capitol to cast the real votes for president of the United States. A unique coalition of civil rights, human rights, labor, religious, and environmental groups was there to call for the abolition of the undemocratic Electoral College and called for other reforms to make the US political system truly democratic.

A rally of more than 200 people was held on the west steps of the Capitol beginning at noon on Monday. As the rally ended demonstrators spontaneously marched through the doors of the Capitol, around the rotunda, through the halls, and finally blocked the stairs leading to the second floor. The high ceilings helped to maginfy the protestor's chants of, "This is what democracy looks like" and "Hey, hey, ho, ho, the Electoral College has got to go."

Representatives from the California NAACP, the Center for Voting and Democracy, Common Cause, Alliance for Democracy, Sacramento Central Labor Council, Global Exchange, and other groups announced their vision of what a truly inclusive and fair democracy would look like.

"It is time to bring our 18th century political institutions into the 21st century—it’s time to abolish the Electoral College," said Medea Benjamin, founding director of the international human rights organization Global Exchange, which has monitored elections overseas for 12 years. "But when it comes to the reforms we need to make, abolishing the Electoral College is just the tip of the iceberg. We need to get big money out of politics, end the disenfranchisement of minorities, and seriously consider reforms such as instant runoff voting and proportional representation that would give more citizens a choice and a voice."

"In the future, the president should be elected by direct popular vote and receive a majority of all votes cast to take office," said Dan Johnson-Weinberger of the Center for Voting and Democracy. "The best way to do that is through a system of instant runoff voting. After the Florida debacle, there is widespread energy for a statewide instant runoff voting initiative for 2002."

Citizens groups say the reforms shouldn’t stop there. The systematic denial of voting rights to the Black population must be addressed. "Clean money" election laws similar to those already enacted in states such as Maine and Arizona should be taken to the federal level and expanded to other states.

"The average campaign contribution of someone living in Century City, CA was over $900 this election year. This is nowhere even close to what the average person from Watts would ever be able to afford to give to a candidate," stated Spencer Overton, a UC Davis Law Professor. "The average contribution from a person living in Watts this year was 97 cents. This is not equal representation."

Activists also said that state laws banning former prisoners from voting should be repealed. Truly independent and non-partisan electoral commissions should be established at the local, state and federal levels. And that voter registration should be extended to voting day itself.

"Now that the public is aware of the flaws in our democracy, this is a historic opportunity to fundamentally reform our electoral system," said Medea Benjamin of the Global Exchange.

Similar rallies occured in Austin TX, Tallahassee FL, Albany NY, Harrisburg PA, and Trenton, NJ.
http://www.globalexchange.org
Add Your Comments
Support Independent Media
We are 100% volunteer and depend on your participation to sustain our efforts!