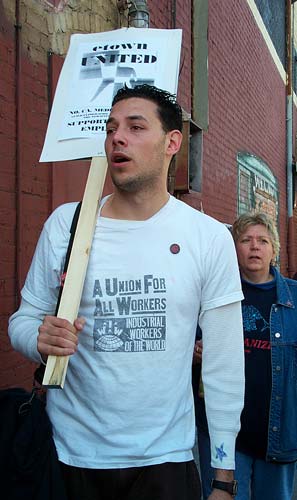 San Francisco--Fired Etown.com workers demonstrated at the offices of their former employer at noon today, protesting the union-busting tactics of their boss, Lew Brown. The protest at Etown headquarters (2017 Mission Street) drew more than 100 people, including the entire staff of Global Exchange, whose office is on the third floor of the same building.

This protest came at the end of a tumultuous past two weeks at Etown. On Monday 27 November, over 70% of the employees in the Etown customer service department filed for a union representation election with the National Labor Relations Board. Five days later, on Friday 1 December, 40% of the people (13 of 33) in the customer service department were terminated. In all, 28 people were fired in one day.

This is the first time that any employees of a dot-com have attempted to form a union in the United States. Etown employees are receiving international media attention, netting front page coverage in the Wall Street Journal, as well as in the BBC, Washington Post, Boston Globe and on ABC and CNN.

Many other groups are paying close attention to these blatant anti-union firings by Etown.com. Workers at Amazon.com are among other dot-com employees currently looking into the possibility of organizing a union in their workplace.

Etown has retained the union-busting law firm of Jackson Lewis -- rated as the number one union-buster in the country by the AFL-CIO.

Today's rally was organized by the Northern California Media Workers on behalf of the workers terminated by Etown as well as for those who are currently employed, yet still remain committed to organizing a union.
http://www.globalexchange.org
Add Your Comments
Support Independent Media
We are 100% volunteer and depend on your participation to sustain our efforts!