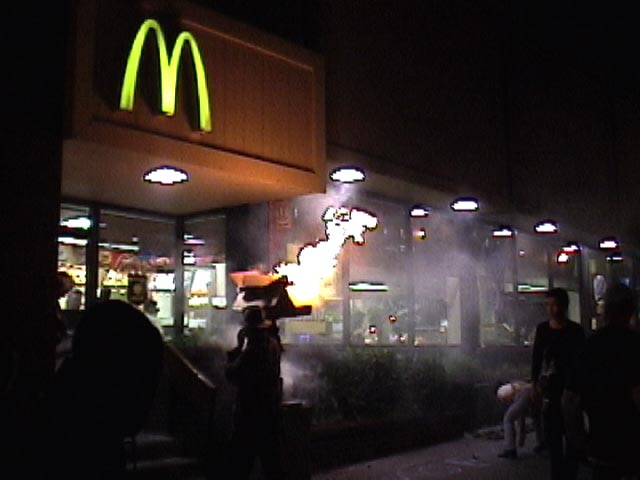 BERKELEY, CA. September 26.
Two or three hundred
Anti-Corporate-Globalization protesters danced, sang, and paraded around
downtown Berkeley tonight in a remarkable show of solidarity with today’s
IMF protests in Prague.  The party started at 6pm with a Critical Mass bike
ride and dancing in the streets outside the downtown Berkeley BART Station.
By 8pm an eight-piece uniformed marching band and an U’wa Indian puppet were
circling around a 5-foot tall bonfire in the street, fueled by newspaper
stands and random pieces of wood appropriated from nearby streets and
construction sites.
The Berkeley police, who had been present all the while re-routing traffic,
allowed the fire to burn for twenty minutes or so, until a small fire truck
and riot squad arrived at the scene and forcefully pushed back the crowd.
While some people were slow in moving, Officer "K. Reece 6" alone stepped
forward to kick ass with a gratuitous show of force, clumsily grunting and
swinging his billy club.
Not to be outdone, however, the protesters gathered their signs and mobile
sound systems and marched north up Shattuck to University Ave. behind a
large banner declaring a global day of protest against the IMF and World
Bank.  A few people carried small torches and periodically dropped burning
newspapers to the ground behind the parade.  A flaming box of paper was left
on the doorstep of an unsuspecting McDonald’s and a laudably anonymous
object launched itself through the window of Cal Fed Bank.  The parade moved
west down University, south down MLK, and east on Addison, all the while
thwarting traffic and meeting little resistance from police forces
unprepared for the quick movements of the group.  The bicycle sound systems
rocked on.
Once back at Shattuck, the main downtown street of Berkeley, the group
spread out across 4 lanes of traffic and marched south.  They shouted at
Starbuck’s, and another brave brick flew through the window of Citibank.  A
news crew appeared, and someone from the protest stopped to explain to them
the reasons for the deliberate targeting of Citibank.
Soon thereafter police presence increased, and the group, now finding
itself routed onto a dark neighborhood street, was surrounded and broken
apart by marching lines of riot police.  “How Berkeley can you be?”
Add Your Comments
LATEST COMMENTS ABOUT THIS ARTICLE
Listed below are the latest comments about this post.
These comments are submitted anonymously by website visitors.