Fatal encounters with the cops in Oakland 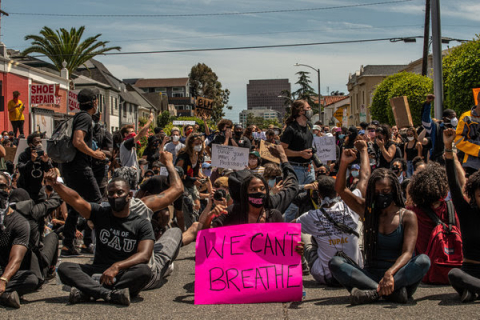 by Lynda Carson
Protest Against Police Brutality and Killer Cops:...
Posted: Sat, Jun 13, 2020 12:56am PDT
A Celebration of the Justice for Oscar Grant Protesters

by Dave Id
January 1, 2019, marks ten years since the murder of Oscar Grant by BART police officer Johannes Mehserle. In the lead up to this grim anniversary, a number of articles, multimedia pieces, radio programs, and television news segments have been produced to commemorate the occasion. Especially moving are those that give voice to Oscar's family and friends. But it's rare to see significant tribute paid to the fact that were it not for the vigor and relentlessness of protesters and activists, ...
Posted: Mon, Dec 31, 2018 4:09pm PST
Oakland Police Memorial Vandalized

by Dave Id
Lovelle Mixon and four Oakland police officers were killed by gunfire on March 21, 2009. A fifth OPD officer, Patrick Gonzales, was injured. "The Ghosts of March 21" is a 29-minute documentary which examines the events of that day. The film is largely based on new interviews, never-before-seen footage from East Oakland resident Damon Hooker, and the findings of the December 2009 Independent Board of Inquiry into the Oakland Police Department’s response to the incident (PDF below). Directo...
Posted: Sun, Apr 20, 2014 4:44pm PDT
‘The Ghosts of March 21’: an interview wit’ filmmaker Sam Stoker

by M.O.I. JR Valrey, SF BayView
March 21, 2014, marks the fifth anniversary of the police murder of Lovelle Mixon, who was killed after he murdered four Oakland police officers and wounded a fifth, around 73rd and MacArthur Boulevard in East Oakland. The murder of Mixon and the cops further polarized the city, that two months prior had been rocked with rebellions related to the police murder of Oscar Grant that cost the establishment in downtown millions of dollars....
Posted: Tue, Mar 18, 2014 10:41am PDT
The Ghosts Of March 21 (Documentary Screening About Lovelle Mixon)

by George Ciccariello-Maher & Mike King
The State of the Union Amidst the Ashes of Extrajudicial Death The Execution of Christopher Dorner by GEORGE CICCARIELLO-MAHER and MIKE KING...
Posted: Thu, Feb 14, 2013 2:05pm PST
From Anaheim to the Bay: Solidarity is Our Weapon Against the Pigs

by FTP Solidarity
In a quiet warehouse district wedged between downtown Oakland and the city’s waterfront there sits a typical sports bar and grill. The place prides itself on being an OPD bar. They host fundraisers for cops, they proudly display portraits of the four cops gunned down by Lovelle Mixon on their wall. Their logo even looks like an OPD badge. On the evening of Friday, July 27, their windows were smashed out to the cheers of a smiling crowd composed of over 100 Oakland rebels. Paint was thrown on ...
Posted: Sun, Jul 29, 2012 10:46pm PDT
Oaklanders March in Solidarity with Anaheim