by Steven Argue
A message from Troy Davis, as well as links to a couple actions people can take, and other analysis....
Posted: Wed, Sep 21, 2011 7:07am PDT
Update for Troy Davis, The Fight Isn't Over

by Steven Argue
Troy Davis was sentenced to death in 1991 for the killing of an off-duty Savannah policeman. Davis was found “guilty” based on dubious accounts that he confessed to the killing and questionable “eyewitness” identifications that included false eyewitness testimony coerced by the cops. Seven of the prosecution’s nine “eyewitnesses” have since recanted. The only holdouts are one man who may be the actual killer and another who initially denied being able to identify the shooter only to pin it on...
Posted: Tue, Sep 20, 2011 3:03pm PDT
All Out for Troy Davis: Global Solidarity

by Campaign to End the Death Penalty
Supporters have been asked to contact the Governor's office ASAP! Below is sample text provided by Kevin's legal team, we encourage you to use or add your own language. Of course, we know that Kevin is innocent and deserves more than commutation - he deserves a pardon - and you can include that in your letter! Check out www.freekevincooper.org if you need more information to include in your letter....
Posted: Sat, Dec 11, 2010 5:27pm PST
FIVE YEARS LATER: THE LEGACY OF STANLEY TOOKIE WILLIAMS 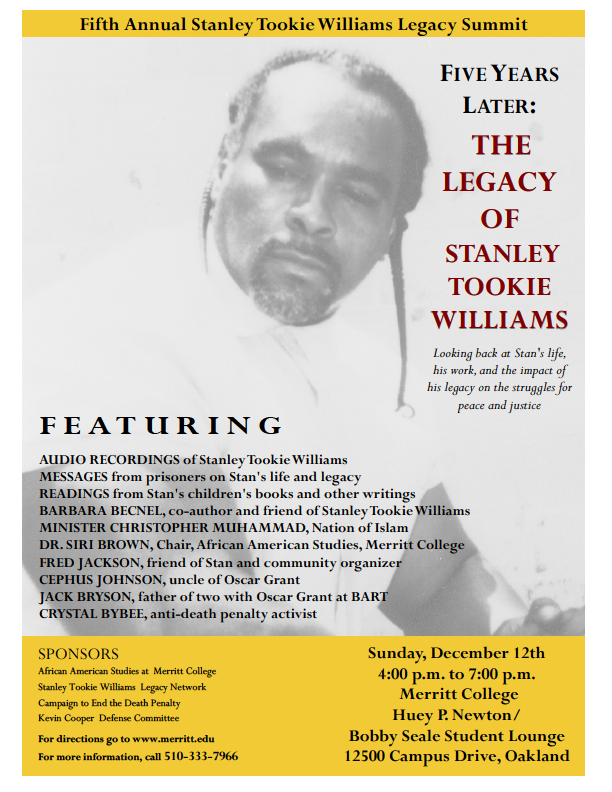 by dave id
"Legal Lynching in America: Oscar Grant, Mass Incarceration, and the Death Penalty" was one of three sessions held on the first night of the 4-day Socialism 2010 conference sponsored by the International Socialist Organization and Haymarket Books. Cam Sturdevant introduced the main speakers, Liliana Segura, writer and board member of the Campaign to End the Death Penalty, and Jack Bryson, activist and father of two of Oscar Grant's friends with him on the Fruitvale station platform when he ...
Posted: Sun, Jul 4, 2010 10:50am PDT
Lynching Then and Lynching Now: The Roots of Racism and the Death Penalty in America