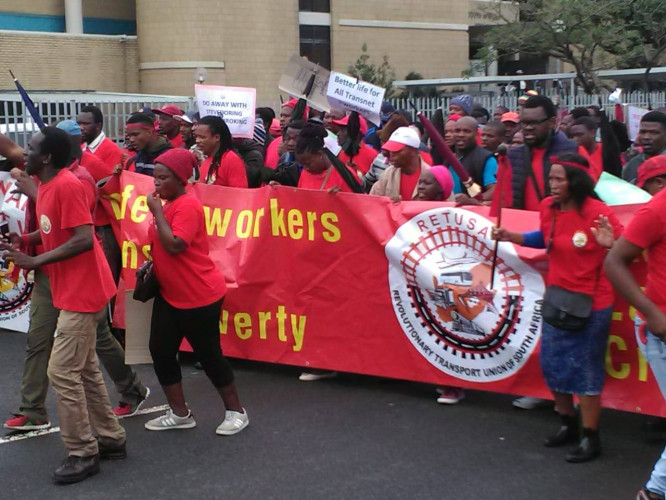 original image (1280x960)
Arms stretched out to Durban, to RETUSA, to dockers internationally...
OAKLAND-DURBAN-THE WORLD: ORGANIZE TO STOP DOCK PRIVATIZATION!
Workers in Oakland salute the statement of support in the struggle against privatization by JV Dube of RETUSA, the dockers union in Durban!
At the hearings on the issue longshoremen/dockers gave their warm appreciation and called for an international campaign of dock unions against the selling off of public land and resources to billionaires; a process happening in Oakland, Barcelona, Durban, Sri Lanka and in every major port of the world.
United we stand against the get-rich-quick looters and plunderers and the established billionaires wanting to wreck our jobs and take our real estate.
HEAR TRENT WILLIS, PAST PRESIDENT, ILWU LOCAL 10:
We thank them very much for sending us solidarity here; that is spectacular! We need all of the help we can get facing insurmountable pressure from billionaires and corporations to take over public resources. This is not a local issue, it’s going on all over the world.
And here in the United States, the system of capitalism makes a takeover like this possible. You have commissions like this one right here to bypass the wishes of the people and to let the minority run business. The minority is billionaires and corporations. They want to run business they want to make all of the money they want a poor and rich class. Working people have to stand up and unite against attempts like this to access public resources, in particular without the people's permission.
I'm proud to be a member of the International Longshore and Warehouse Union. There has to be a national resurgence of the working people. Working people working together can stop this privatization. Independent of all the divisive issues, like racism, being one of the main ones. Divisions of any kind, working together for common cause. The only thing that can stop the billionaires is an organized working campaign for working people in this country, period.
AND HEAR AARON WRIGHT, ILWU LOCAL 10 MEMBER:
I’ve just heard that the South African port workers have sent their support for our fight against privatization in the Port of Oakland.
My father was a big part of the fight against apartheid by stopping the working of cargo that was from South Africa in the 1980s. I remember that clearly.
We were thanked by Nelson Mandela when he came here after the ANC had took over. So there is a long history with South Africa in the fight for liberation there and we appreciate their support now, in our fight to keep our valuable natural and public resources from being privatized and financialized.
It seems like privatization of ports is a very profitable business going on all over the world in Durban, everywhere, we need an international campaign to say we need the ports as transportation centers.
Our port land, you know, seashore land is extremely valuable.
They've looting our country; it's a great smash and grab and they'll continue to do it as long as we don't put up any resistance. It seems like the same as going on in South Africa, the corruption, the looting, the privatization.
It's a worldwide thing, a globalization thing. And, you know, that will happen unless we work together and now!

RETUSA Statement To Our Brothers and Sisters of ILWU Local 10 fighting Privatization Of Port Of Oakland
https://www.facebook.com/UNIONRETUSA/
We, the dock workers of Durban, stand with the ILWU, maritime workers and the Oakland community who are against selling public dock land to private developers.
We support your stand and that of working people in the Bay Area and throughout the world where our dock lands are being turned into condos, yacht basins and playgrounds for the rich. This has happened in Durban.
We remember well that ILWU Local 10 stood with us against the apartheid regime in 1984 to stop cargo from the apartheid regime. Today we stand with you for a united action throughout the world for dockers, maritime workers, pubic educators and our communities.
An Injury To One Is An Injury To All!
JV Dube, General Secretary, RETUSA, Revolutionary Transport Union of South Africa, representing dock workers of Durban
http://www.retusa.co.za/ 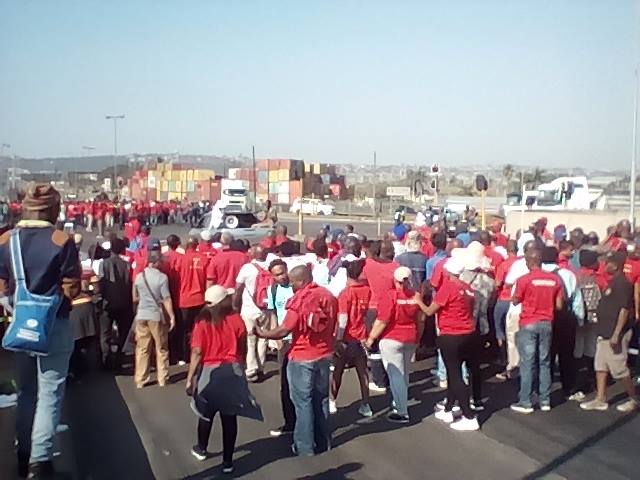 South African Durban dock workers have taken mass action against the attacks on their jobs. Like ILWU Local 10 and 80,000 maritime workers their jobs are in jeopardy as a result of the privatization of the Howard Terminal in the Port of Oakland.
https://www.youtube.com/watch?v=mPfHD0FODbI
§Former ILWU Local 10 President Trent Willis Thanked Durban Dockers
by Labor Video Project
Friday Jul 1st, 2022 9:21 AM 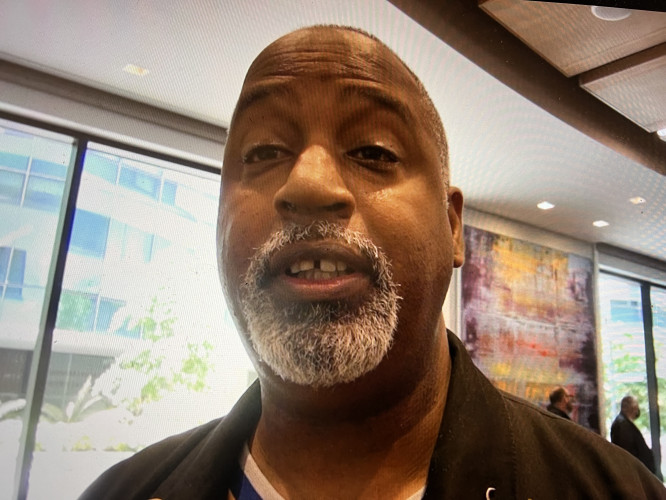 original image (4032x3024)
Past ILWU Local 10 president Trent Willis thanked the Durban RETUSA dockers for their statement of solidarity against billionaire John Fisher's privatization land development scam in the Port. This has been backed by the Democratic governor, the Mayor of Oakland and the Democratic Party Oakland City Council. Willis called for a working people's party that would defend against privatization and looting of public resources.
https://www.youtube.com/watch?v=mPfHD0FODbI
§Protest At BCDC Against GAP A's Billionaire John Fisher's Privatization of Port
by Labor Video Project
Friday Jul 1st, 2022 9:21 AM 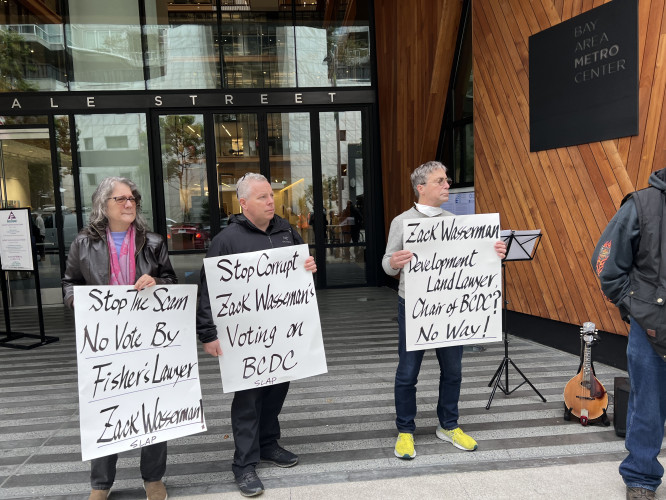 original image (4032x3024)
A press conference and rally was held outside the Bay Conservation Development Commission on 6/30/22 to protest the privatization of the Howard Terminal in the Port of Oakland for an A's stadium, hotels and 3,000 luxury condos. This would further gentrify Oakland and drive working class Black and Brown people out of the City. The chair of the BCDC Zack Wasserman has been a land development lawyer for Fisher and is helping to push the transfer of land over to Fisher despite his conflicts of interest. Similar to South Africa and the Port Of Durban corrupt capitalist politicians are selling off public resources.
https://www.youtube.com/watch?v=mPfHD0FODbI
Add Your Comments
Support Independent Media
We are 100% volunteer and depend on your participation to sustain our efforts!