Add an Event
Newswire
Calendar
Features
Home
Donate
From the Open-Publishing Calendar
From the Open-Publishing Newswire
Indybay Feature
Related Categories: Central Valley | Government & Elections
She’s a Witch!
by Mike Rhodes (mikerhodes [at] comcast.net)
Tuesday Jun 28th, 2022 9:44 PM
Loralee Bergdall, who identified herself as a community activist, read a statement from the women targeted in a mailer from Madera County Board of Supervisors District 5 candidate Mark Reed at a June 2 press conference. Photo by Mike Rhodes 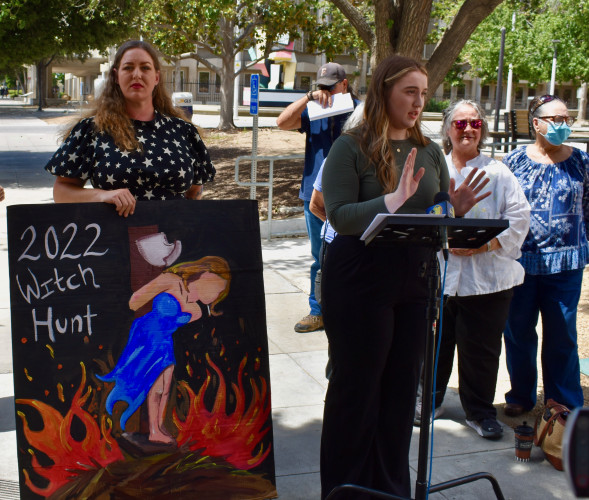 original image (3892x3299)
There are some wild accusations coming out of the Madera County Board of Supervisors District 5 race. In a mailer, candidate Mark Reed accused his opponents’ supporters of being witches and warlocks. Reed came in second behind Robert Macaulay on June 7, and there will be a runoff on November 8.
Several Madera residents targeted by Reed say they have been threatened and are concerned for their safety. At a press conference in downtown Fresno on June 2, some of the targeted women and their allies named in the mailing spoke out about the threats and intimidation that followed Reed’s inflammatory attack. Reporters were asked not to mention the names of the women in the mailer (unless they gave permission).
Reed also targeted the LGBTQ+ community, union members and socialists. Brooke Oliver, who spoke at the press conference, said that “the MAGA movement wants to set us back 50 years, but by calling women witches and calling them out it harkens back to being burned at the stake 100 or 200 years ago.”
One of the women mentioned in the mailer responded: “I am a Christian woman and I want to say…We will not be oppressed. We will not be intimidated.
“To our eastern Madera County community, my sisters and I stand today on the shoulders of Emmeline Pankurst, Elizabeth Cady Stanton, Sojourner Truth and more…
“We invite and encourage our community residents who feel marginalized to stand on our shoulders and be lifted up to choose your vote without intimidation or suppression.
“Eastern Madera County has zero tolerance for intimidation, oppression and hate.”
From a second individual who was unable to attend the press conference: “I am a founder of Oakhurst LGBTQ+, a social media networking space for locals, since larger spaces were often filled with hate and attacks.
“I am also a professor and an associate marriage and family therapist. Both my personal and professional code of ethics are to be accepting of all and to call out instances of injustice that I observe.
“This flier won’t stop me from doing the work I do to create safety for marginalized folks in this community. I grew up here, and both of my parents have dedicated significant amounts of charitable work here as well.
“To be attacked for my sexuality is nothing new; it’s happened before. However, it hurts to be judged for something that I can’t control, anymore than I can control my Jewish heritage, or my brown eyes.
“I have felt more fear when going out in public places and been experiencing panic attacks daily since I was made aware of this attack on me, as well as receiving messages of hate on social media.
“As we celebrate Pride this month, I honor the strong women like Sylvia Rivera and Marsha P. Johnson, who also stood against hate or intolerance. I am proud to be following their example and fighting for what is right.
“I’m grateful for the love and support I’ve been shown, and I will continue to use my voice to challenge those who try to harm others.”
Lastly, from a third individual: “As I am unable to take part in the press conference due to recently undergoing surgery…and am not feeling up to it, I am writing my thoughts about being included with four other local women on Mark Reed’s latest mailers.
“I don’t think socialism means what Reed thinks it means. I am not ashamed of being a person who cares for others and wants the best for all. I encourage you to look up the platform for the Peace & Freedom Party to see if you don’t agree with most things included in the platform.
“That being said, all my actions and comments regarding Reed are because I am a social justice advocate wanting justice for all, not because I am a socialist. I have called out his lies and discrepancies. I stood up to his accusations against me and others.
“This flier has all five of us feeling unsafe in our own communities with many of us being here for decades. This is known as a conservative community with many hateful and angry people.
“This makes some of us feel uncomfortable going out in public and wondering if someone might attack us after seeing our profile pictures on social media. Some are worried about their jobs and if they may lose them due to this.
“It comes across as sexist, homophobic, racist and generally hateful.”
For more information about Macaulay, who is running against Reed in the Nov. 8 election, visit http://www.bobbymacaulay.com.
*****

https://www.youtube.com/watch?v=zrzMhU_4m-g
Add Your Comments
Support Independent Media
We are 100% volunteer and depend on your participation to sustain our efforts!