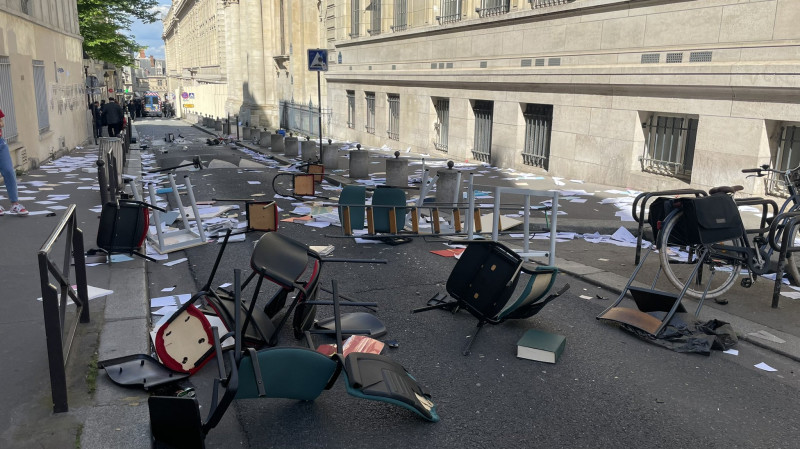 original image (2048x1150)
May 1st, 2022: the passivity and the terrifying torpor of the trade union marches was everywhere. Fortunately in some cities, like Paris, Nantes or Rennes, the demonstrations took a riotous turn.

It is important to remember that the fight against the current government is not and never will be played out in a polling station. It is always distressing to see what a trend it is to determine precisely which sauce you prefer to be cooked in. It is always so distressing to see how the "fascist threat" leads more and more people to participate in the electoral game, even among those who call themselves revolutionaries, those who spent the last five years in the streets. How we forget that the 'least worst' has never been a barrier against the worst. It is curious to see how in the space of five years, we have gone from a generation that claimed to be ungovernable to a generation completely governed.

The left has done its job well. It was able to pacify and channel every form of resistance over the last few years. It was able, once again, to produce this hope, this illusion that there can be a good politics of power. Power is a logic that exceeds those who exercise it. The best intentions in the world are not enough to counteract this rule. The left does not fight power, it only proposes another way of managing it. There are different ways of exercising power, but there is no good government.

For all those who still hope to escape this logic, it is time to cast away all the institutional games.

The refusal of the vote is obvious, it is useless to try to convince people of that. More and more people don't seem to care about elections. But it is difficult to see in the abstention the semblance of an opposition. At best, it indicates the lucidity to have noticed that, in the end, the difference between each party does not matter. But once the deadline has passed, everyone goes back to their own business and the machine continues to run without any problem, whether or not it has been voted in. Not only does democracy not care about our non-participation, it even has a certain interest in it. The abstentionist also has his own function, he occupies an empty space always susceptible to be covered by the ineptitude of sociologists, the space of republican reconquest.

There were, however, a few rallies here and there on the evenings of the first and second rounds, the surprising occupation of the Sorbonne, the pirating of radio waves and the sabotage of fiber optic cables. Yet the slogan "Neither Macron, nor Le Pen", although it spread everywhere, was unable to put into words a desire for non-institutional politics. Some radicals have tried to add a "Ni Mélenchon", but for the most part they remain candidates for nihilism. A political vacuum totally conducive to a simple update of the Socialist Party being the last remaining hope. Here the radical left is revived, following in the wake of the institutional left.

For as great as the refusal of this world is, the left has been able to restructure itself, absorbing the fashionable political identities of its most radical fractions: feminism, intersectionality, ecology, anti-racism. It has acquired an armed wing in the branch of instagramable radical pseudo-antifa aesthetics, which prevent people from masking themselves in protest. It has seized upon the politics of safety in order to annihilate any form of political conflictuality and manage people. Even the Gilets Jaunes, shorn of political identity, have succeeded in transforming into tired, uptight people prepared to 'settle the score with Macron at the ballot box.

Any revolutionary politics today must free itself from the left if it wants to exist. To distance itself politically from it has become necessary. It is never too late to put the idea of revolution back on the agenda. This has nothing to do with progressivism, but with all those whose detestation of power leads them to see insurrection as the only reasonable and sensible perspective in our time.

We must refuse to see ourselves as victims, to stop asking ourselves who cast the first stone. The government carries on its offensives. We must plan our own.
We must stop defining ourselves by our identity, confusing engagement with caging. We need to take a stand and think about how to move forward together. There have been insurrectionary movements. We must prepare ourselves for those still to come.

Let's elaborate an other refusal, neither progressive nor reactionary. Let's organize ourselves into a revolutionary camp.
Add Your Comments
Support Independent Media
We are 100% volunteer and depend on your participation to sustain our efforts!