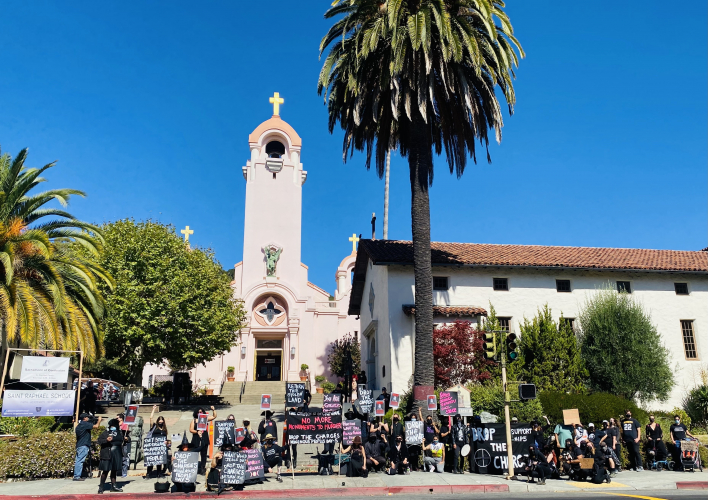 original image (3715x2620)
Witches holding signs reading "Build on theft and genocide" and "Juniperro Serra Was No Saint," gathered outside Mission San Rafael Sunday. The church was cordoned off its courtyard filled with police.

While statues of colonial figures have been removed by cities all over the country, Marin County continues to choose an anti-Indigenous response to the activist, spurned on in part by extremist San Francisco archbiship Salvatore Cordileone. Cordileone is known for his virulent homophobia and leading exorcisms against racial justice activists. Public records show numerous communications between the Archbishop and District Attorney.

No one has ever been succesfull prosecuted for a Serra statue toppling in California. Even in the state capital, Governor Newsom signed a bill to replace Serra activists removed with one honoring Native Tribes.

District Attorney Lori Frugoli has not returned phone calls about filing charges against the Mission for theft of Indigenous land and attempted genocide. A press conference has been announced for 10 am on Indigenous Peoples Day. : https://bit.ly/IP5Oct11PressConference

http://ip5solidarity.org
Add Your Comments
Support Independent Media
We are 100% volunteer and depend on your participation to sustain our efforts!