Add an Event
Newswire
Calendar
Features
Home
Donate
From the Open-Publishing Calendar
From the Open-Publishing Newswire
Indybay Feature
Related Categories: San Francisco | Global Justice & Anti-Capitalism
Apache Stronghold Spiritual Convoy to the Ninth Circuit Court
by Apache Stronghold
Sunday Oct 10th, 2021 6:04 AM
Apache Stronghold will travel on a Spiritual Convoy to the Bay Area from Tuesday, October 18th to Saturday, the 23rd. The convoy, in prayer, will visit supporting Tribes leading to the 9th circuit court hearing to protect the Sacred Oak Flat. It is the United States intention to exchange this sacred land for mining by Rio Tinto and BHP's Resolution Copper. We invite all to join us in the journey to San Francisco to be present for our Appeal Hearing. 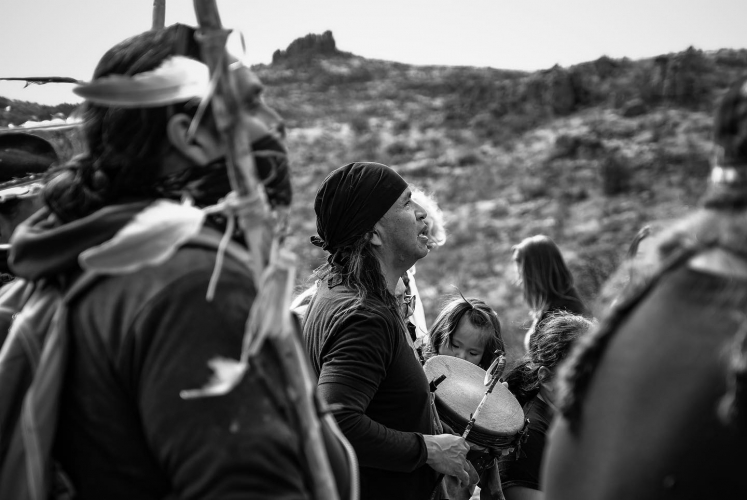 On October 22, 2021, Our Appeal on the motion for Temporary Restraining order and Preliminary Injunction against the United States, USDA, and Tonto National Forest will be heard in the 9th Circuit Court of Appeals in San Francisco. Apache Stronghold is dedicated to the defense of Native American sacred sites.

We are requesting in Apache Stronghold v. United States to save our spiritual lifeblood, a sacred site called Oak Flat, from being destroyed by a copper mine that would swallow our holy ground in a nearly 2-mile-wide 1,000-foot-deep crater.

Oak Flat is listed in the National Register of Historic Places and has been protected from mining for more than six decades, but, in a 2014 midnight backroom deal politicians slipped in a “rider” to the must-pass National Defense Authorization Act, letting the government transfer the land to Resolution Copper, a foreign-owned mining company.

Apache Stronghold’s appeal asks the 9th Circuit Court of Appeals to recognize that the U.S. Supreme Court ruled in McGirt v. Oklahoma (2020) that "we hold the government to its word" in a Treaty with the Creek Indians, and that the U.S. Supreme Court has stopped multiple government violations of religious rights in cases like Burwell v. Hobby Lobby (2014) and Little Sisters of the Poor v. Pennsylvania (2020).

2. Whether the government is subject to heightened scrutiny under the Free Exercise Clause when it takes targeted action singling out only one piece of land and destroying only Native American religious practices.

3. Whether the government violates its trust obligation to Native Americans when it promises in a treaty to settle their “territorial boundaries” and pass laws conducive to their “happiness and prosperity,” and then takes their sacred religious site by force and transfers it to a mining company for permanent destruction.

Apache Stronghold will travel to the Hearing on a Spiritual Convoy, traveling to the Bay Area from Tuesday, October 18th to Saturday, the 23rd.

The convoy, in prayer, will visit supporting Tribes leading to the 9th circuit court hearing to protect a Sacred and Holy land that God has blessed the World with Deities, Oak Flat. It is the United States intention to exchange the land to Rio Tinto & BHP's Resolution Copper for mining. We invite all to join us in the journey to San Francisco to be present for our Appeal Hearing.

The schedule for the convoy is attached. It will be live-streamed during the convoy and will also air on 90.1 FM KZSU Stanford University Radio. The Rally in San Francisco will also air via the Poor Peoples Campaign on poorpeoplescampaign.org. All links will be on http://www.apachestronghold.com and on facebook at apache stronghold. All CDC Guidelines will be followed and adhered to at each location along the convoy. Please adhere to California COVID requirements and San Francisco COVID mandate. Gozho do leel (Blessings), Apache Stronghold Dr. Wendsler Nosie SR.
https://bsnorrell.blogspot.com/2021/10/apa...
§
by Apache Stronghold
Sunday Oct 10th, 2021 6:04 AM 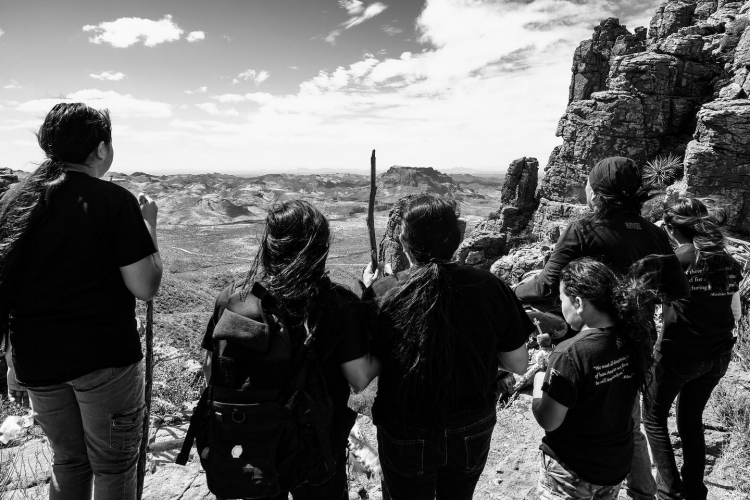 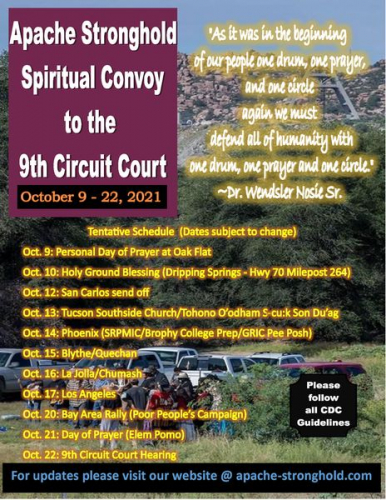 original image (464x600)
https://bsnorrell.blogspot.com/2021/10/apa...
Add Your Comments
Support Independent Media
We are 100% volunteer and depend on your participation to sustain our efforts!