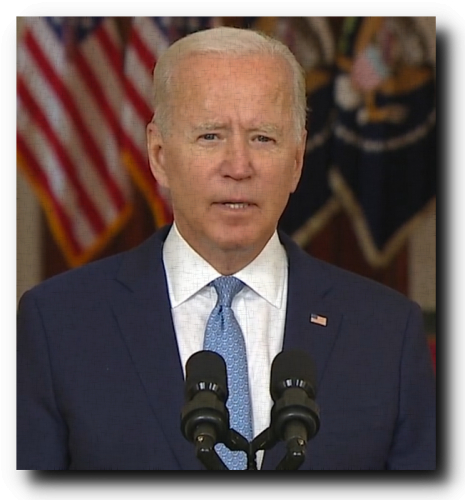 Biden’s speech on Afghanistan: An admission of a shattering defeat

US President Joe Biden delivered a speech Tuesday afternoon declaring an end to the 20-year US war in Afghanistan.

Coming the day after a C-17 military transport plane flew the last US troops out of Kabul and in the midst of celebrations in the streets of Afghanistan of the end of US occupation, Biden’s speech included statements never before heard from the White House, acknowledging the devastating costs of a war that ended in a humiliating debacle.

The defeat suffered by the United States at the hands of the Taliban insurgency exposes the failure of not just the policies pursued in Afghanistan but the entire strategy that has guided the actions of US imperialism both at home and abroad for decades.

The immediate political purpose of Biden’s speech was to defend his administration from ferocious criticism of its handling of the chaotic 17-day evacuation that followed the overrunning of the country by the Taliban and the precipitous collapse of the Kabul puppet regime and its US-trained security forces. Thirteen US military personnel lost their lives in the operation, while another 20 were wounded.

The attacks have come not only from Republicans but also a wide layer of Democratic officials. The media, having “embedded” itself within the US military and serving as an unflagging cheerleader for US wars, has responded with particularly bitter hostility.

The Washington Post’s editorial Tuesday described the Kabul evacuation as “a moral disaster, one attributable not to the actions of military and diplomatic personnel in Kabul … but to mistakes, strategic and tactical, by Mr. Biden and his administration.” For good measure, it published a column by Michael Gerson, the former senior aide and speechwriter for George W. Bush, who shares political responsibility for the criminal wars in Afghanistan and Iraq, condemning “the Biden administration’s panicky, slapdash, humiliating exit from Afghanistan—dependent on the kindness of the Taliban and commemorated by indelible images of chaos and betrayal.”

Such super-heated rhetoric reflects the savage divisions and recriminations within the US ruling establishment and its military and intelligence apparatus over the Afghanistan debacle.

While shot through with contradictions, evasions and historical falsifications, Biden’s speech was directed at least in part at appealing to the broad anti-war sentiments within the American population.

He stated that the US had spent “$300 million a day for two decades,” on the war in Afghanistan, adding that “yes, the American people should hear this. ... And what have we lost as a consequence in terms of opportunities.”

He stressed the grievous losses in lives and limbs, with 2,461 US troops killed and another 20,744 wounded.

“A lot of our veterans have gone through hell,” he said. “Deployment after deployment. Months and years away from their families … financial struggles, divorces, loss of limbs, traumatic brain injuries, post-traumatic stress. We see it in the struggles many have when they come home. … The cost of war they will carry with them their whole lives.”

Biden cited the “shocking and stunning statistic that should give pause to anyone who thinks war can ever be low-grade, low-risk, or low-cost: 18 veterans, on average, who die by suicide every single day in America—not in a far-off place, but right here in America.”

He also referred obliquely to the societal costs incurred by a country perpetually at war: “If you are 20 years old today, you’ve never known an America at peace.”

The portrait painted in this speech is a damning indictment of the US ruling establishment and both its political parties, which have perpetuated wars that have inflicted untold suffering, robbed society of vast resources and subjected an entire generation to uninterrupted violence and terror.

The US president made no mention, however, of the greatest cost of the US war and occupation: The deaths of somewhere between 170,000 and a quarter of a million Afghans, the wounding of hundreds of thousands more and the displacement of millions.

Biden was incapable of providing a rational explanation for the Afghan war, claiming that it had been launched in response to the still unexplained September 11, 2001 attacks on New York City and Washington D.C., in which 15 of the 19 hijackers were Saudis, and none were Afghans.

He boasted that the US war had “decimated” Al Qaeda in Afghanistan, while acknowledging that “the terror threat has metastasized across the world, well beyond Afghanistan,” citing Al Qaeda-linked elements in Syria, Iraq, Somalia, the Arabian Peninsula and “across Africa and Asia.” Indeed, within Afghanistan itself, US intelligence estimates that Islamic State-Khoran (ISIS-K), responsible for the suicide bombing at the Kabul airport, has some 2,000 fighters, as opposed to a few hundred Al Qaeda members in Afghanistan in 2001.

The growth of these forces is the direct product of the US wars of aggression in Afghanistan and Iraq, as well as Washington’s utilization of Al Qaeda-linked militias as proxy ground troops in its regime-change wars in both Libya and Syria.

Taken as a whole, Biden’s speech is a devastating exposure of US wars based on lies and fabrications that have been waged at a horrific cost. In this regard, Afghanistan cannot be separated from Iraq, Libya, Syria and elsewhere.

What was it all for? What justified the waste of trillions of dollars and the taking of hundreds of thousands of lives? And who is to be held accountable for these crimes within the government, the major parties, the military high command, the US corporations, the media and academic figures who promoted and justified these wars?

Indeed, a disaster of this magnitude signals the end of an era and the shattering of an entire strategy pursued by US imperialism based on the utilization of military force to overcome the progressive erosion of its global hegemony.

From the 1980s on, Washington was determined to “kick the Vietnam syndrome,” i.e., reverse the political consequences of the defeat suffered by US imperialism in Vietnam in order to launch new wars of imperialist aggression.

With the dissolution of the Soviet Union at the hands of the Moscow Stalinist bureaucracy, this policy took off, anticipated by the first US war in the Persian Gulf and followed by American interventions in the Balkans. Washington embraced the concept that the world had arrived at a “unipolar moment” in which US imperialism could engage in an unrestrained pursuit of global domination and global counterrevolution.

The dubious events of September 11, 2001, which have to this day never been really explained, were then exploited to justify wars of aggression abroad, torture and the erection of the scaffolding of a police state within the US itself.

The humiliating retreat from Afghanistan signals the failure not just of US policy in that one country, but of an entire strategy, world view and program of global domination and domestic reaction that has persisted for 30 years.

This debacle, which is intersecting with an escalation of the class struggle in the US and internationally under the impact of growing social inequality and the homicidal, profit-driven policies of the world’s ruling classes in response to the COVID-19 pandemic, has profoundly revolutionary implications.

This has not lessened the danger of war in the least. Indeed, Biden used his speech to insist on US imperialism’s ability to continue murderous “over-the-horizon” attacks on Afghanistan or any other country in the world, while shifting its military might toward far more dangerous confrontations with China and Russia, both nuclear-armed powers.

The decisive question is the arming of the emerging movement of the working class with a socialist and internationalist perspective to put an end to war and the capitalist system which is its source.

https://www.wsws.org/en/articles/2021/09/0...
Add Your Comments
Support Independent Media
We are 100% volunteer and depend on your participation to sustain our efforts!