Add an Event
Newswire
Calendar
Features
Home
Donate
From the Open-Publishing Calendar
From the Open-Publishing Newswire
Indybay Feature
Related Categories: Central Valley | Racial Justice
From Negroland to Negro Bar - Origins of the Juneteenth Freedom Journey
by adapted from Shannen Dee Williams
Sunday Jun 6th, 2021 10:27 PM
Elmina Castle and the Catholic chapel erected at the center of its courtyard directly on top of the structure’s slave dungeon are still standing is one of the great historical treasures of the 21st century. 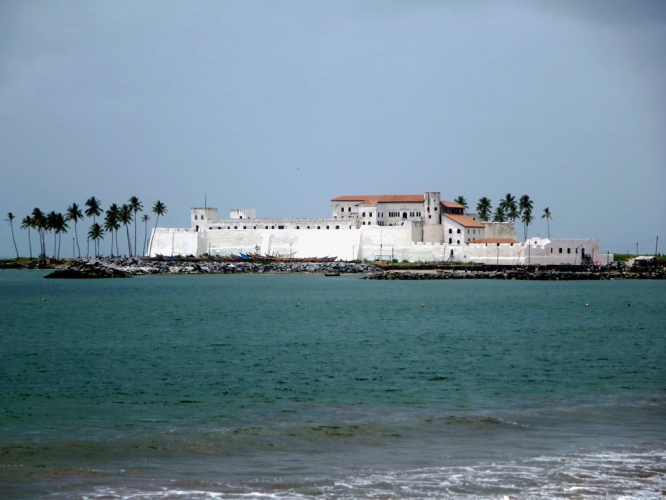 original image (1024x768)
From at least 1452 to 1875, European Christians, who were mostly Catholic, violently transported at least 12.5 million African women, men and children from the African continent to the Americas, Europe and other parts of Africa to fuel and sustain four centuries of Atlantic world slavery.

This trade constituted the largest forced human migration in modern history and laid the social, political and economic foundations for much of modern Europe and their “New World” colonies. It also resulted in the deaths of 10 million to 50 million African people, including babies.

Although the church’s rampant participation in this barbaric trade is beyond dispute, it is rarely taught in Catholic schools and religious formation programs.

Indeed, many Catholics are unaware of the 15th century papal bulls, including Pope Nicholas V’s 1452 “Dum Diversas” and Pope Alexander VI’s 1493 “Inter Caetera,” where the church first authorized the trade’s development and morally sanctioned the perpetual enslavement of Africans and the seizure of “non-Christian” lands.

Even less realize that Pope Gregory XVI’s 1839 condemnation came some 337 years after the trade formally began and 35 years after the success of the Haitian Revolution. Indeed, it was the Haitian Revolution, led by baptized free and enslaved Black Catholics, that cemented the foundation of antislavery throughout Europe’s slave societies in the Americas, not the papacy.

Perhaps most indicative of the silencing of the church’s slaveholding past and culpability in modern racism, though, is how few Catholics know the story of São Jorge da Mina (St. George’s of the Mine) Castle in present-day Ghana.

Established by the Portuguese in 1482, Elmina Castle (as it is commonly known) was the first of more than 60 permanent European-controlled trading posts and slave depots built in West and Central Africa to facilitate the transatlantic trade. It was also the site of the first Roman Catholic chapel erected in sub-Saharan Africa.

For more than 300 years, hundreds of thousands of kidnapped and enslaved Africans traveled through Elmina on their way to America’s slave societies. At the height of the slave trade, approximately 30,000 enslaved Africans passed through Elmina annually where they encountered a host of European traders, priests, soldiers and families who denied their humanity and subjected them to unspeakable acts of trauma and violence.

That Elmina and the Catholic chapel erected at the center of its courtyard directly on top of the structure’s slave dungeon are still standing is one of the great historical treasures of the 21st century.

Elmina also stands as one of the most powerful reminders that the Catholic Church was never an innocent bystander in the histories of colonialism, African enslavement and white supremacy.

2021 California Junetenth Freedom Celebrations open up what remains a lower priority for the powers that be and Juneteenth remains a "Texas" thing as if all of slavery occured on an island off the southern coast of Texas.
https://theculturetrip.com/africa/ghana/ar...
Add Your Comments
Support Independent Media
We are 100% volunteer and depend on your participation to sustain our efforts!