Add an Event
Newswire
Calendar
Features
Home
Donate
From the Open-Publishing Calendar
From the Open-Publishing Newswire
Indybay Feature
Related Categories: East Bay | Media Activism & Independent Media
Lying Does Not "Nurture" Relationships! Pacifica New Day Fake News Tactics
by Stop "New Day" Fake News Campaign
Sunday Jun 6th, 2021 1:13 PM
The Pacifica "New Day" faction put out fake news that Jane Fonda had endorsed their corporate bylaw proposal. They were caught in a lie which was answered by the Pacifica Counsel. These tactics have been supported by their KPFA on air hosts who have used their names and credibility to put out fake news.
They also engaged in red baiting tactics by charging that Pacifica has been taken over by the Green Party and Workers World Party.
They need to be held accountable for these corrupt election tactics. 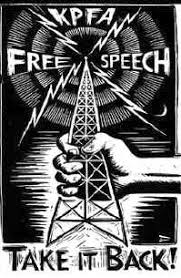 From Pacifica Counsel To All Pacifica Members

On June 7 you will receive a ballot to vote on a set of Pacifica bylaw revisions proposed by a group of members who call themselves "New Day Pacifica."

In mid -May this group sent out an email to the entire Pacifica membership list (as allowed by our very democratic election rules) which stated that their proposal had been endorsed by progressive actress Jane Fonda.

On May 28, 2021, Ms. Fonda stated: "I guess I was hoodwinked along with Martin Sheen," and then copied me on this email which she had just sent to New Day at info [at] newdaypacifica.org:

To Whom It May Concern,

I am writing to request that my name be immediately removed from any mailings related to New Day and Pacifica.

She also authorized me to release this statement:

We have all learned much over the last few years about the importance of labeling false information as "false. " We are doing this here because the Pacifica email list was used to disseminate false information.

Please make sure to vote.


"Freedom is not a state; it is an act. It is not some enchanted garden perched high on a distant plateau where we can finally sit down and rest. Freedom is the continuous action we all must take, and each generation must do its part to create an even more fair, more just society."


Lying & Fake News Does Not "nurture" Relationships
"Pacifica needs to nurture and support our relationships"?

2021-06-05 BLOG_ADMIN
Jane Fonda endorsed our campaign on February 9. We subsequently publicized her endorsement along with Martin Sheen’s in our May 21 mailer to the Pacifica membership.

We were notified by Pacifica’s General Counsel Arthur Schwartz May 28 12:42pm that he had talked to Ms. Fonda and she wanted her “name immediately removed from any mailings related to New Day and Pacifica.”

We immediately contacted Ms. Fonda through the mutual friend who had communicated with her in February, and the misunderstanding was resolved with her privately. There was no “outrage” involved–ever. We then emailed Mr. Schwartz the same day at 8:47 pm to thank him for bringing the issue to our attention and to let him know that the issue had been resolved with Ms. Fonda.

General Counsel Schwartz who is leading the Vote No movement inside Pacifica told the Pacifica national board the next day that the Jane Fonda misunderstanding was “some pretty high profile dishonesty”and invited the national board to tell the members about it.

Some of the Vote No majority on the national board then sent out a tabloid-style scandal sheet “Jane Fonda Outraged” May 31, 7:56pm, to the Pacifica national membership in an attempt to get members to vote No and quoted Pacifica General Counsel Schwartz’ memo re New Day’s supposed dishonesty.

It saddens us to see progressives who should appreciate the advocacy work Jane Fonda and other Hollywood celebrity activists engage in trying to turn a private misunderstanding into a self-serving public scandal, making less likely Ms. Fonda and others’ future engagement of any sort with Pacifica. Our intention has always been to strengthen Pacifica and the community that it is part of. Pacifica needs to nurture and support our relationships with activists like Jane Fonda, Martin Sheen, Danny Glover and Harry Belafonte.

Join these Vote No endorsers: 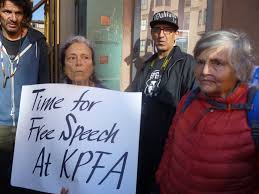 The KPFA management and their supporters have kicked off programs without letting programmers know and also helped shut down WBAI with imported programming from KPFA. They put KPFA host Sabrina Jacobs into running WBAI and illegally shut down the station. They also refuse to have any on the air debates at KPFA on the bylaw changes so the members can make an informed decision. Since they control the airwaves they want to shut down any real debate on their top down corporate bylaw proposals.
http://pacifica-democracy-project.org/endo...
Add Your Comments
§The current bylaws have failed Pacifica. Vote Yes to Save Pacifica.
by Repost
Sunday Jun 6th, 2021 2:32 PM
With this election, the survival of Pacifica and its five stations, KPFA, KPFK, KPFT, WPFW, and WBAI, is at stake.

If you're frustrated by endless fund drives and news of impending financial disaster ... if you don't want your favorite hosts and shows to go silent ... if you don't want an invaluable progressive media asset to continue down the road toward the threat of forced asset sales and possible shutdowns ... vote YES for change and reform and renewal.

This has been a hard-fought campaign. The issues can be confusing. But there's no question that although current management may mean well, they've fumbled the ball: things are financially a mess and must get better. Clinging to the status quo is not a solution — it's just more of the same.

Please don’t sit this one out. This is our one big chance to turn things around, and your YES vote will make all the difference. Pacifica's future is in your hands

Add a Comment
§A Broken Record With Latest "New Day" Pacifica Bylaw Campaign
by Stop The Proposed Corporate Top Down Bylaws
Monday Jun 7th, 2021 12:18 PM
In the last proposed corporate bylaw election campaign the very same language was used by the supporters of that last bylaw change. This is the last chance to save Pacifica. This is like a broken record.
The facts however is that Pacifica is dealing with it's financial crisis and is in much stronger footing despite the effort to destroy the network. The "New Day" group are even unhappy that Pacifica was able to get funding from the government like many other non-profits that have faced a financial crisis because of the Covid pandemic.
Instead of applauding the Pacifica ED and the PNB for making this happen, they complain about Pacifica getting the funds. Those who are supporting the bylaws want the bankruptcy and destruction of Pacifica because they want to sell of the signals at WBAI in New York and KPFT in Houston.
For many years, these same people who support management at KPFA and blame WBAI for all the problems have spent their time at the Local Station Board supporting lawsuits and other tactics to push the foundation into the hands of a bankruptcy judge arguing that Pacifica was going to have to be liquidated unless it was turned over to a judge to run the Foundation.
They call. themselves "progressives" but they want a government judge to take over a democratically run alternative radio network?
They did not even wait until the regular election cycle for another run at new bylaws costing the Foundation tens of thousands of dollars.
In the last election they lost 2 to 1 but this does not matter as they push ahead in their efforts to destroy the only national alternative media network. Make sure to vote NO on their latest scheme.
Add a Comment
§Advice from a WBAI victim of "New Day": Vote NO!
by WBAI Listener
Monday Jun 7th, 2021 12:49 PM
OMG! Everything that "Repost" claims that New Day will save Pacifica from IS EXACTLY WHAT THEY DID to WBAI.

3 out of the 4 Officers New Day has chosen for us SUPPORTED the COUP at WBAI!

1. Their MINORITY FACTION on the national board violated the current bylaws by muting the mics of WBAI Directors and REFUSING to let them vote on the Pacifica National Board (This is how they stop factionalism---now they are using their bylaws scam to block WBAI and WPFW from having a voice. Notice only the West Coast is repped by their 4 self-appointed Officers!)

2. The pre-"New Day" faction's "professional" interim Exec. Dir. John Vernile showed up on 10/07/2020 with ARMED GUARDS and FIRED EVERYONE at WBAI.... oh, but maybe New Day doesn't count WBAI staff when they warn about "firings."

3. That iED ripped out mics, padlocked the station, and piped in boring, canned shows from KPFA. Oh, but it doesn't matter if WBAI listeners lose THEIR "favorite programmers!"

4. We had to go to court to STOP THEM--the invasion in the middle of a FUND DRIVE cost WBAI HUNDREDS OF THOUSANDS of $$$. Remember "a penny saved is a penny earned?"

7. Add it up---all the $$$$$$$$$ they have wasted and cost Pacfica could have paid off half that "loan!" And they are complaining that Pacifica is BROKE? If that's the "New Day" I'd hate to see "The Day After New Day" takes over!

8. What ELSE are they lying about, beyond the Jane Fonda fake news? Maybe it's just because I'm a New Yorker... once burned, twice shy.

Go to WBAI Fight Back or Pacifica Fight Back.
And Vote NO! Save democracy and fight racism!

(Don't worry, they'll be back again, even if we beat their pants off... because they seem to have A LOT OF MONEY! (Notice they have not asked all those hidden donors to give money to Pacifica now. No, it's like a bribe... "If you want all this money, vote Yes!") Sorry. I will vote NO!