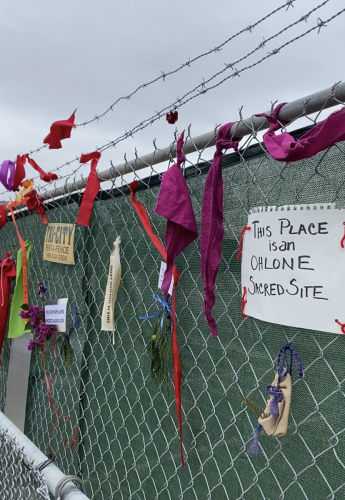 original image (828x1199)
The local and national struggle to protect the oldest Ohlone Shellmound and village site continues . While the City of Berkeley and local tribe won the initial court case, the developers have been using their extensive resources to desperately try to reverse their losses in appeals court.

The morning that court arguments opened, the developers had the Sacred Site was surrounded in thousands of feet of barbed wire and nearly 100 “no trespassing” signs. These aggresssions are in direct violation of the United Nations Declaration on Rights of Indigenous people and in violation of the American Indian Religious Freedom Act.

Supporters have continued to visit the site and tie ribbons and leave messages, turning the imprisoned site into a monument to this struggle. The struggle to protect the Shellmound has widespread public support including from the City of Berkeley, the National Trust for Historic Preservation, and an extensive interfaith community.

The committee to save the West Berkeley Shellmound invites supporters to visit the Shellmound at 1900 Fourth St. in Berkeley on their own time and say a prayer, set an intention, tie a ribbon or leave an offering in support of the people whose land you are on.

Lisjan Ohlone Tribal Chairperson Corrina Gould said, "Its not too late to save this one piece to ground, this one place that doesnt have a building, this one place thats open to the sky."
http://shellmound.org
§West Berkeley Shellmound Fence
by Supenca Abundia
Tuesday Mar 16th, 2021 8:51 AM 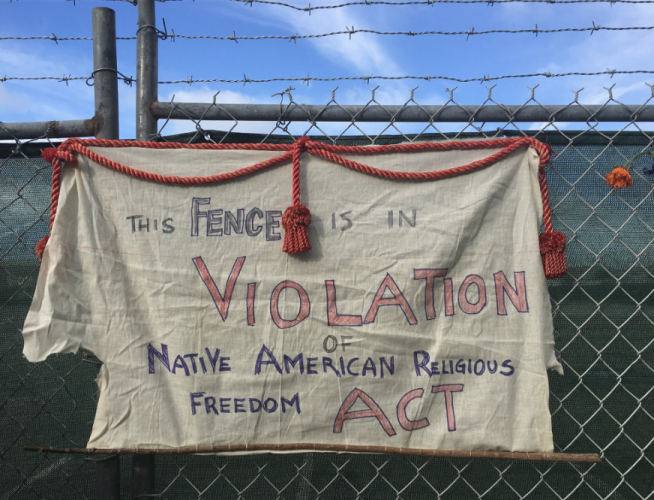 original image (872x666)
This Fence is in violation of Native American Relgious Freedom Act
http://shellmound.org
Add Your Comments
Support Independent Media
We are 100% volunteer and depend on your participation to sustain our efforts!