Add an Event
Newswire
Calendar
Features
Home
Donate
From the Open-Publishing Calendar
From the Open-Publishing Newswire
Indybay Feature
Related Categories: Central Valley | Environment & Forest Defense | Government & Elections
Salmon seasons slashed on much of California Coast due to low Sacramento, Klamath fish numbers
by Dan Bacher
Monday Mar 15th, 2021 10:36 AM
The question now is whether Governor Gavin Newsom, the State Water Resources Control Board and CDFW will make sure the fish get enough water to thrive or will they give the water to almond and hay exporters, while continuing to push new dams and the Delta Tunnel, noted Regina Chichizola, the co-director of Save California Salmon.

“Most California cities are doing their job to conserve water and they are also impacted by the poor water quality in our rivers due to agricultural withdrawals and pollution,” she said. 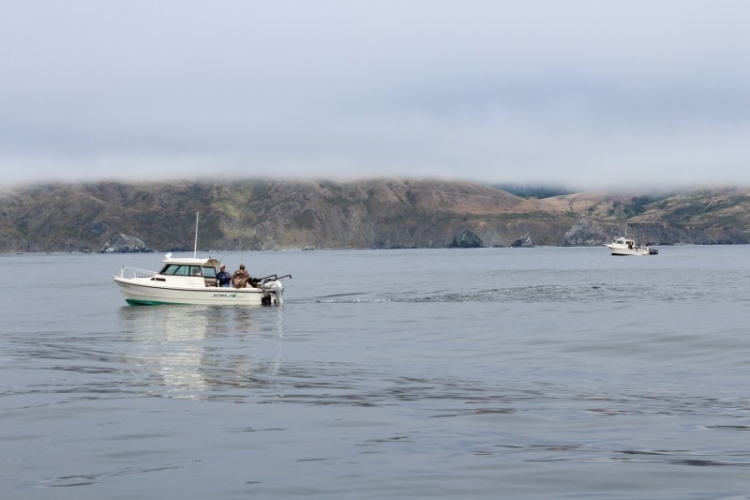 original image (800x533)
The California Department of Fish and Wildlife (CDFW) on March 11 announced that the recreational ocean salmon fishery has been curtailed on most of the California coast, due to poor stock assessments of Sacramento River and Klamath River fall-run Chinook salmon.

The Pacific Fishery Management Council (PFMC), the federal management body that oversees salmon and other ocean fisheries, has adopted three alternatives for 2020 ocean salmon fisheries off Washington, Oregon and California for public review. The Council will make a final decision on salmon seasons at its meeting in Vancouver, Washington, on April 5-10.

Recreational anglers north of Pigeon Point can expect a loss of around 40 percent of their normal season, while commercial fishermen are expected to lose two-thirds of their season.

“Meeting our conservation objectives continues to be the highest priority for the Council,” said Council Chair Phil Anderson. “In addition, the Council is considering the needs of Southern Resident killer whales as part of its deliberations. Poor ocean conditions and their effects on salmon productivity continue to make it challenging for the Council to meet its management objectives and sustain healthy fisheries.”

California’s recreational salmon fishery will open in ocean waters on Saturday, April 3 in the Monterey management area, from Pigeon Point (37° 11’ 00” N. latitude) south to the U.S./Mexico border, with a minimum size limit of 24 inches, according to a press release from the CDFW.

“All other areas of the California coast will remain closed until further notice. The remaining 2021 season dates and associated regulations will be finalized next month,” the CDFW said.

These closures take place while the CDFW is supporting two plans, the Delta Tunnel and the Big Ag-backed voluntary water agreements, that will make things only worse for Sacramento River Chinook salmon, Central Valley steelhead, Delta smelt and other fish populations. At same time, the state and federal governments are planning to export 5 million acre feet of water from the Delta to the water contractors during what appears to be a drought year.

Doug Obegi, an attorney for the Natural Resources Defense Council (NRDC), recently revealed that Central Valley growers have received notification from the state Department of Water Resources and the Bureau of Reclamation that they will allocate about 5 million acre feet of water this year.

”The Bureau of Reclamation and Department of Water Resources plan to allocate approximately 5 million acre feet of water this year—as long as California allows them to effectively drain the two largest reservoirs in the state, potentially killing most or nearly all the endangered winter-run Chinook salmon this year, threatening the state’s resilience to continued dry conditions, and maybe even violating water quality standards in the Delta,” said Obegi in his blog: on.nrdc.org/…

Although the San Francisco and the Fort Bragg management areas were originally scheduled to open in April, on the advice of salmon fishery representatives, the Pacific Fishery Management Council (PFMC) made the decision to delay the openers in these areas to limit ocean fishery impacts due to poor stock forecasts, according to the CDFW. Both Klamath River fall Chinook and Sacramento River fall Chinook have reduced ocean abundance forecasts for the 2021 season compared to long term averages, and the PFMC is taking steps to ensure that enough salmon will return to rivers this fall to meet spawner abundance goals.

“Traditionally, fishing in the Monterey management area is better early in the season, prompting recreational fishing representatives to prioritize its opening ahead of areas to the north. Although seasons for the San Francisco, Fort Bragg and Klamath management areas are not yet known, the season alternatives that are currently under consideration prioritize opportunity later in the summer, when catch rates are typically better,” the CDFW stated.

The CDFW mentioned nothing about a key reason for the decline in Central Valley salmon stocks — the persistent dewatering of the Central Valley rivers every year, due to the expansion of water-intensive almond tree acreage in the San Joaquin Valley over the past decade.

“The low number of salmon is primarily traced to unbalanced water practices that regularly divert too much of the water needed by salmon,” reported John McManus, President of the Golden State Salmon Association (GSSA), who moderated a press conference about the upcoming season Friday. “About 80 percent of the water used in California goes to agriculture with literally trillions of gallons going to grow almonds and other nuts in the western San Joaquin Valley, an area considered a desert.”

“In the middle of the last drought from 2012 to 2016, as salmon numbers were decimated, 340,000 acres of new almond orchards were added in California. Almonds require a gallon of water to produce a single nut. California’s salmon runs still haven’t recovered from the losses suffered in thatdrought the past decade,” McManus stated.

McManus noted that officials forecast there are only about 271,000 adult Sacramento Valley salmon now in the ocean off the West Coast, far below the 500,000 needed to support a “half way decent” ocean salmon season.

You can hear about the upcoming salmon season from Mike Conroy, Pacific Coast Federation of Fishermen’s Associations (PCFFA); George Bradshaw, commercial salmon fisherman; Tim Elie of the Outdoor Pro Shop; Joe Conte of Water2Table seafood distributor; Mike Aughney of Reel Magic Sportfishing; and John McManus of GSSA by watching Friday’s press conference: https://youtu.be/NeWEr0HaFCI
In the coming month, the (PFMC) will decide how much time and area will be closed to sport and commercial ocean salmon fishing in 2021.

“The restrictions being considered are the most draconian since the closure of all salmon fishing in 2008 and 2009, which was a historic first. That closure followed three record setting years of water diversions from the Delta,” said McManus.

Many salmon-related jobs and businesses, as well as those in the hospitality industry that typically serve a sector of the sport fishery, will be seriously harmed in 2021, according to the GSSA.

“Following a poor commercial crab season, the coming paltry salmon season has us worried about how we’re going to pay the bills and support our families. The local fleets that supply salmon to our markets and restaurants are in very real danger of permanent collapse,” said Sarah Bates, who fishes from San Francisco and is a GSSA board member.

The GSSA said the “chronic over-diversion of Central Valley rivers” means that hatcheries are increasingly becoming the only place in the Central Valley with conditions needed to keep salmon alive.”

“The vast majority of the salmon caught in the ocean in 2020 were reared in hatcheries which can keep water temperatures under 56 degrees, the lethal threshold. The eggs of naturally spawning salmon are wiped out when reservoir releases are cut back and rivers shrink or when the cold water needed to keep salmon alive is diverted for agriculture,” the group said.

Although it won’t help for this season, GSSA calls on the CDFW to move SF Bay hatchery releases west from the current release sites near Vallejo to sites closer to the Golden Gate Bridge. “This could increase survival of existing hatchery salmon by 200 to 300 percent,” said McManus.

“GSSA and our allies are in court trying to win a more balanced water policy that stops the environmental decimation taking place.  We hope the new administration in the White House takes heed of our situation and reverses the damaging water diversion policies of the Trump administration before our salmon are gone,” said Dick Pool, GSSA Secretary.

As climate change makes drought conditions more frequent and ocean and river water temperatures warmer, a key to salmon survival in the future is getting the fish up above rim dams to spawn in the colder tributaries and headwaters.

The Winnemem Wintu Tribe has been pushing for the reintroduction of the original strain of winter-run Chinook salmon, now found in New Zealand after being introduced there over a hundred years ago, to the McCloud River above Shasta Dam.

The Klamath River Tribes, federal and state governments and PacifiCorp, a subsidiary of Warren Buffett’s Berkshire-Hathaway, are currently engaged in a historic effort to remove four PacifiCorp dams on the Klamath River and to reintroduce Chinook salmon, coho salmon and steelhead into the headwaters above the dam.

Dave Hillemeier, Fisheries Director for the Yurok Tribe, told the Eureka Times-Standard the Tribe has not had a viable commercial fishery since 2015: http://www.times-standard.com/...

“It’s an extreme hardship for the Tribe,” Hillemeirer said. “Due to depleted stock status, our fall Chinook allocations have been far below the subsistence and ceremonial needs of the Tribe during four of the past five years.”

However, the question now is whether Governor Gavin Newsom, the State Water Resources Control Board and CDFW will make sure the fish get enough water to thrive or will they give the water to almond and hay exporters, while continuing to push new dams and the Delta Tunnel, noted Regina Chichizola, the co-director of Save California Salmon.

“Most California cities are doing their job to conserve water and they are also impacted by the poor water quality in our rivers due to agricultural withdrawals and pollution,” she said.

Final salmon season dates will be decided during the virtual PFMC meeting to be held April 6-9 and 12-15. The public is invited to comment on the PFMC’s season proposals at that meeting or at a virtual public hearing scheduled for 7 p.m. on Tuesday, March 23.

Details on how to attend the PFMC meeting, public hearing, and ways to provide public comment can be found on the PFMC website at http://www.pcouncil.org

After the PFMC’s April meeting, the California Fish and Game Commission will vote to formally approve the ocean salmon regulations set by the PFMC and approve recreational in-river salmon regulations on the Sacramento, Mokelumne and Klamath-Trinity rivers.

The CDFW advises anglers to check for updated information when planning a salmon fishing trip. Season dates, bag/possession limit information and gear restrictions can be found on CDFW’s ocean salmon web page at http://www.wildlife.ca.gov/oceansalmon or by calling the Ocean Salmon Regulations Hotline at (707) 576-3429.

Public notification of any in-season change to conform state regulations to federal regulations is made through the National Marine Fisheries Service ocean salmon hotline at (800) 662-9825.
Add Your Comments
Support Independent Media
We are 100% volunteer and depend on your participation to sustain our efforts!