Add an Event
Newswire
Calendar
Features
Home
Donate
From the Open-Publishing Calendar
From the Open-Publishing Newswire
Indybay Feature
Related Categories: U.S. | Health, Housing & Public Services | Police State & Prisons | Racial Justice
It is now freedom or death for Mumia!
by Bro. Zayid Muhammad, Amsterdam News
Saturday Mar 13th, 2021 11:25 AM
The time is now to turn it up and free this incredible human being who has become a breathing living gracious symbol of human solidarity like few others in the last several decades. 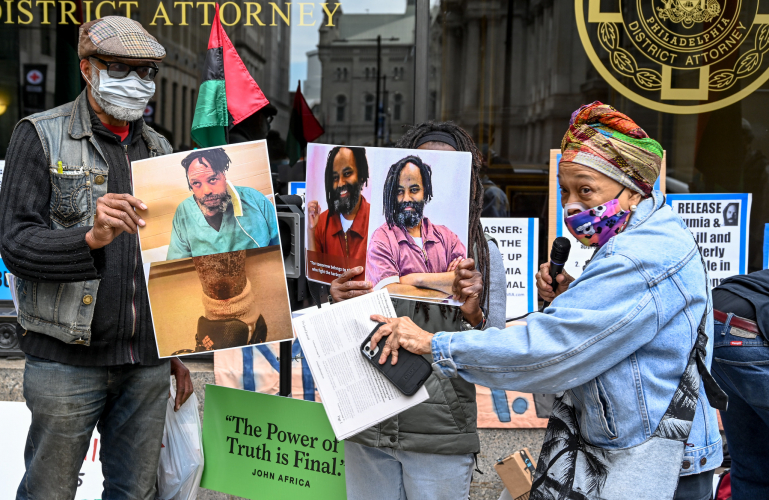 It is now freedom or death for Mumia!
By Bro. Zayid Muhammad
Amsterdam News
(March 11, 2021)

“There comes a time when silence is betrayal...” Martin Luther King, Jr.

Imagine all NNPA Black newspapers, for example, carrying regularly featured articles as a matter of priority on all of the evidence suppressed in Mumia’s case.

Imagine Black clergy rallying at major news sites condemning the white-out and/or the demonization of Mumia through their media entities.

Imagine Black elected officials from Philadelphia and from all over the country rallying to denounce the continued ordeal of this man.

Imagine surviving ’60s icons conducting civil disobedience at the governor’s office and the DA’s office in Philadelphia with an eager throng of two generations of action-hungry activists looking to bumrush it, en masse if it didn’t yield results.

Even though Mumia has survived two execution dates, 30 years on death row and several recent dangerous medical challenges, thankfully with the force of a multiracial international campaign at his back and our ancestors, this hasn’t happened yet.

As this goes to press, Mumia is in a prison infirmary dangling on a tightrope of both COVID-19 and congestive heart failure, a most deadly medical cocktail!

Not to mention Mumia’s Hep-C weakened liver and skin. Remember that?

If ever there was a time to step forward for Mumia, it is now!

The most tragic dimensions surrounding Mumia’s current ordeal is that there is now so much ample evidence of his innocence, so much ample evidence of both prosecutorial and judicial misconduct to free him if he can just be allowed to get it in on an appeal and that evidence on the court record. In spite of Mumia clearly being on the verge of objectively vindicating himself, he can tragically die in prison if not enough of us turn it up now!

Wait! What about Philly’s highly prized progressive DA Larry Krasner? Hasn’t he moved to overturn more than a dozen bad convictions rooted in deep-seated Philly racism and corruption? Yes, but not for Mumia.

Even though his office ‘found’ six boxes of missing evidence in his case, which includes a letter from a star prosecution witness Robert Chobert seeking payment for his testimony, reeking of prosecutorial misconduct and granting Mumia a new trial, Krasner, up for re-election, went into court last month and said that no new appellate relief for Mumia ought to be granted because his trial and conviction were sound. From Judge Sabo vowing to help ‘fry the nigger,’ to suppressed eyewitness testimony that was not paid for by anyone totally contradicting Chobert’s, to the illegal exclusion of Black jurors from the trial, to Sabo having Veronica Jones arrested on the stand for telling the truth on how she was coerced to testify against Mumia, to their being clear evidence of another person being the actual killer of Officer Daniel Faulkner and a whole lot more, Krasner showed his true ‘white’ color and is now seeking to block Mumia’s real chance at justice and freedom at a time when it can genuinely cost him his life.

The time is now to turn it up and free this incredible human being who has become a breathing living gracious symbol of human solidarity like few others in the last several decades.

Let us all press Pennsylvania’s other liberal ‘fox’ Gov. Tom Wolf to have Mumia and all aging prisoners who pose no risk to society released to help address this insidious pandemic. Over 100 people have died from COVID-19 in Pennsylvania prisons. All over 50 and with preexisting conditions.

Press DA Krasner to address his now dangerous wrong and go back into court and encourage a conviction reversal and a new trial for Mumia as he has done for others.

The time is now! 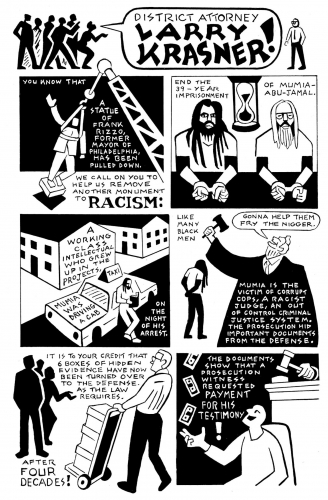 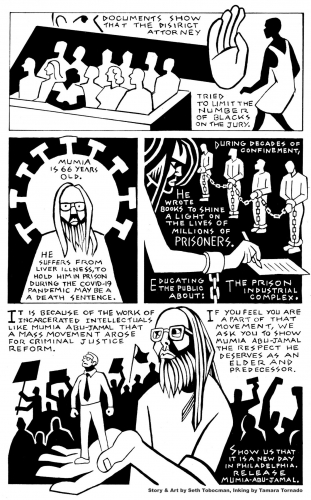 original image (1427x2287)
http://amsterdamnews.com/news/2021/mar/11/...
Add Your Comments
Support Independent Media
We are 100% volunteer and depend on your participation to sustain our efforts!