Add an Event
Newswire
Calendar
Features
Home
Donate
From the Open-Publishing Calendar
From the Open-Publishing Newswire
Indybay Feature
Related Categories: U.S. | Labor & Workers
Postal Workers caravan delivers 2 million ‘Save USPS’ petitions to Washington
by Mark Gruenberg
Thursday Jun 25th, 2020 4:00 AM
WASHINGTON—[June 23] Snaking its way from the Washington Navy Yard to the U.S. Senate, a caravan of cars driven by Postal Workers delivered petitions with two million names on them, demanding lawmakers enact the Heroes Act, including its $25 billion to save the U.S. Postal Service from financial devastation the coronavirus has caused to its revenues and potential subsequent collapse. 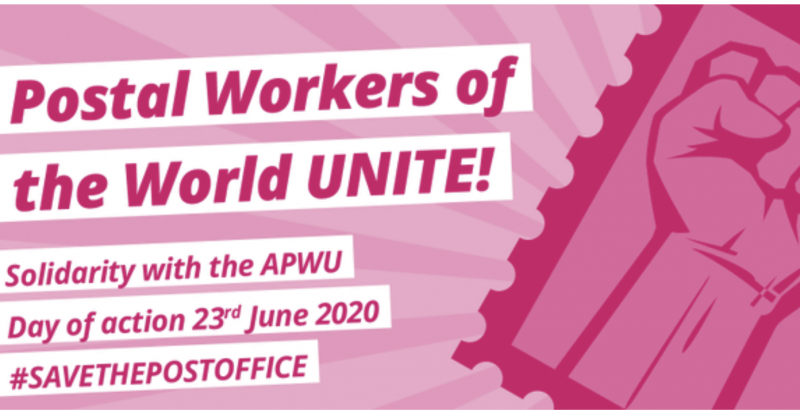 Their objective during the “Save The Post Office Day Of Action”: To pressure senators, especially the chamber’s ruling Republicans, to override their kingpin, Majority Leader Mitch McConnell, R-Ky., and approve the $3 trillion economic aid measure.

Caravanners appealed for continuing support from listeners and viewers—on social media using the hashtag #SaveThePostOffice, by sending messages on the APWU’s website, or by calling senators toll free at 844-402-1001.

“The post office is literally under threat of running out of money,” Dimondstein said. Repeating an argument he used before, he added, “The Cares Act”—the prior $2 trillion aid bill Congress passed in March—“generated over $500 billion for private corporations, but nothing for the post office.”

“And if the post office runs out of money, everything else goes up for grabs in terms of service” to the entire nation, since it’s the only delivery service that reaches everyone in the U.S., and cheaply—$0.55 for a first-class letter—he added. That includes food, medicines, and absentee ballots, he noted.

That latter item—ballots—highlights the particularly crucial role of the post office in ensuring a fair and accessible election this November. With COVID-19 still expected to be ravaging the nation by the fall, the importance of vote-by-mail will only increase. The GOP under Trump have targeted vote-by-mail as a threat to their re-election chances and are doing everything possible to stop its expansion. That’s another important part of the explanation for why the Republicans are determined to cripple the Postal Service.

The $25 billion for the USPS in the Heroes Act would go only to offset the crash in postal revenues the coronavirus caused, Dimondstein said. It’s also a very small part of the bill.

Among other economic aid, the measure extends federal unemployment benefits for millions of jobless workers through Jan. 31 and provides $915 billion to keep state and local governments—including schools—going while the nation combats the Depression caused by anti-coronavirus shutdowns, social distancing, and other measures.

But McConnell is sitting on the bill, which the Democratic-run House approved earlier this year. He calls it a “Democratic wish list.” His opposition led the caravan out onto the streets of D.C., with similar processions—all in vehicles to let drivers meet anti-coronavirus social distancing standards—nationwide.

The stickers are not the only evidence of wide support for keeping the USPS up and running and its 630,000 workers (a heavy majority of them unionists and many of them people of color, female, veterans, or a combination) on the job.

Public opinion polls show 91% support, including majority Republican support, for the Postal Service—especially in rural areas whose residents depend on it for delivery of food, medicines, and other vital items during the pandemic.

And 69% of respondents back the direct cash no-strings-attached payment, which is what APWU, the Letter Carriers, the Mail Handlers/Laborers, the AFL-CIO, Jobs With Justice, the Alliance for Retired Americans, and other supporters advocate.

The USPS board, all named by GOP President Donald Trump, also supports the aid, and has been very cooperative in providing personal protective equipment (PPE), social distancing, and other measures to guard against coronavirus spread among USPS workers, Dimondstein said. Nevertheless, thousands have been sickened and nearly 70 have died.

And while the Trump-named board supports the cash, Trump doesn’t. He wants to dismantle the USPS and turn it over to privatizers, several speakers said.

The twin threats prompted other speakers to campaign for the no-strings-attached aid.

“The Postal Service is considered the most essential enterprise in America, and it’s needed now more than ever to overcome this pandemic,” said Letter Carriers President Fredric Rolando. Since USPS deficits “have soared into the billions” due to a 50% decline in money-making first-class mail, “the Senate leadership must step up and send a clear signal to the entire country” that it supports USPS and its workers, by passing the Heroes Act.

“I live in a small community in Southern New Jersey,” JWJ Executive Director Erica Smiley explained. She telecommutes to her job, but her neighbors “depend on the Postal Service for medicines, food, and often personal contact” when quarantined by the coronavirus. The $25 billion “is an opportunity to fully invest in a public Postal Service.”

AFL-CIO President Richard Trumka coupled his support of the money for the USPS with a direct shot at Trump, though not by name. “The USPS works at serving us, but they’re under attack not just from the virus, but from their own government,” he said of Trump’s destruction scheme. “Why is our president trying to drive the agency into oblivion? It’s ideology. It’s privatization…and it’s shameful.”
https://www.peoplesworld.org/article/posta...
Add Your Comments
Support Independent Media
We are 100% volunteer and depend on your participation to sustain our efforts!