Add an Event
Newswire
Calendar
Features
Home
Donate
From the Open-Publishing Calendar
From the Open-Publishing Newswire
Indybay Feature
Related Categories:
Tsuru for Solidarity Vigil: Black Lives Matter/Free Families Detained by ICE
by R. Robertson
Monday Jun 8th, 2020 7:25 PM
Tsuru for Solidarity, a community of Japanese Americans, supports the Black Lives Matter movement and calls for the release of families detained by ICE. On June 7, at Orange Park in South San Francisco, they offered prayers and performed bon odori dance for all the lives lost to state violence. As part of their sojourn, some laid paper cranes in the memorial garden at the former site of the Tanforan Assembly Center where 7,800 were imprisoned in 1942 for just one "crime"--their Japanese ancestry. 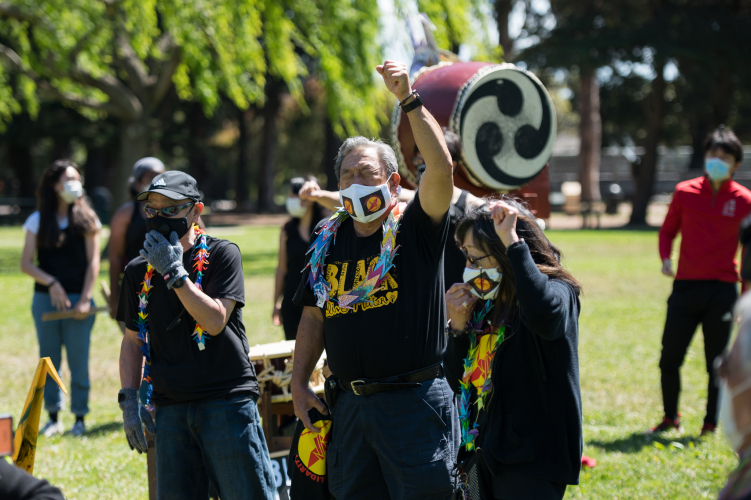 On June 7, members of Tsuru for Solidarity and allies in the Japanese-American community gathered at Orange Park in South San Francisco. From there some of the group, including WWII concentration camp survivors, went to the memorial to the 1942 Tanforan incarceration center that is located in the present-day Tanforan shopping center in nearby San Bruno. There they laid strings of paper cranes. When they returned to Orange Park a multi-faceted program began.

The colorful action in the park included speakers and a memorial service for those who died in the WWII camps, Black persons murdered by police or racists, and those who have died in ICE detention centers.The Reverend Ronald Kobata of the Buddhist Church of San Francisco led a prayer service.

Japanese citizens and much of the Japanese diaspora celebrate the tradition of Obon, a Buddhist custom to honor the spirits of one's ancestors. As part of the program in South San Francisco, participants danced in the Obon tradition of bon-odori to taiko drumming performed by Bakuhatsu Taiko Dan.

Following the program, the group created a caravan of cars covered with paper crane streamers and posters calling for justice. Their caravan circled the Tanforan shopping center several times.

The event was a part of simultaneous actions coordinated by Tsuru for Solidarity hubs in seven cities across the country and was supported by many groups including Florin Japanese American Citizens League and Nikkei Resisters.
§Taking a Knee
by R. Robertson
Monday Jun 8th, 2020 7:25 PM 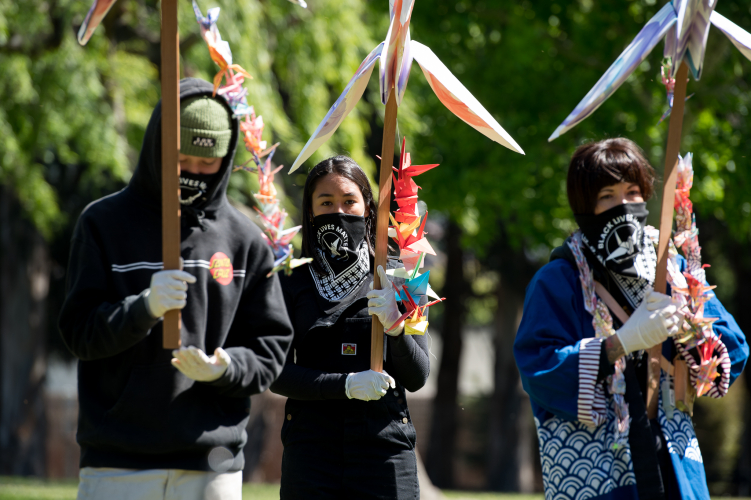 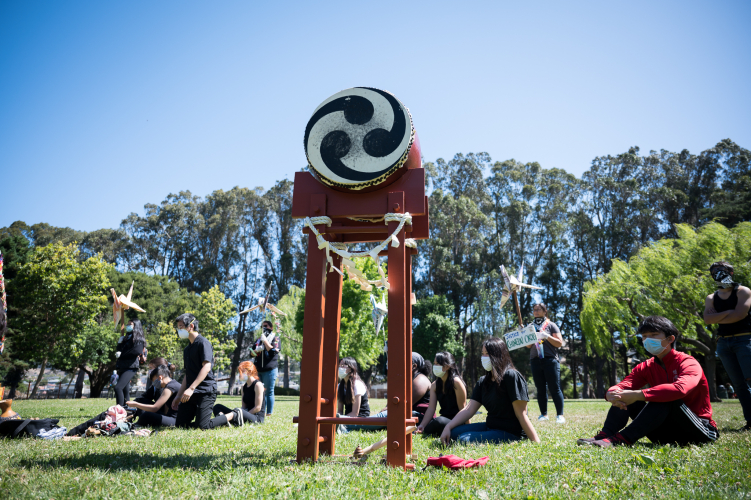 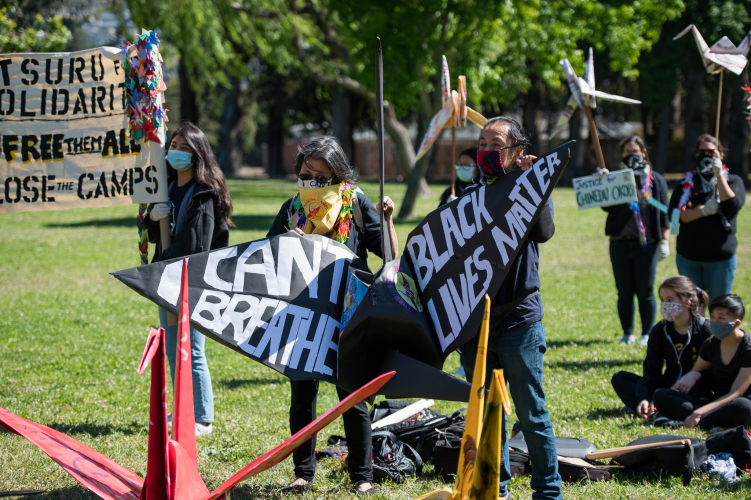 original image (2048x1363)
Okobi was killed by San Mateo County Sheriffs Deputies in late 2018. Ironically the same day of the Tsuru for Solidarity Vigil, a rally and march of 500 was held in nearby San Bruno, the scene where he was tased to death. For more info on the tragic death of African American Chinedu Okobi visit Justice4Chinedu.
§prayer
by R. Robertson
Monday Jun 8th, 2020 7:25 PM 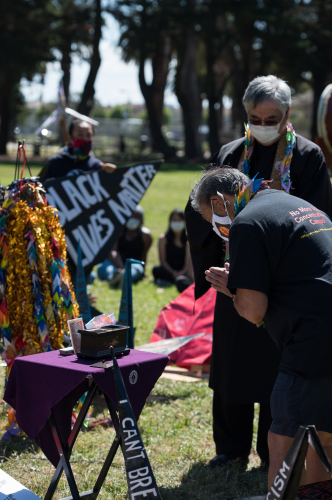 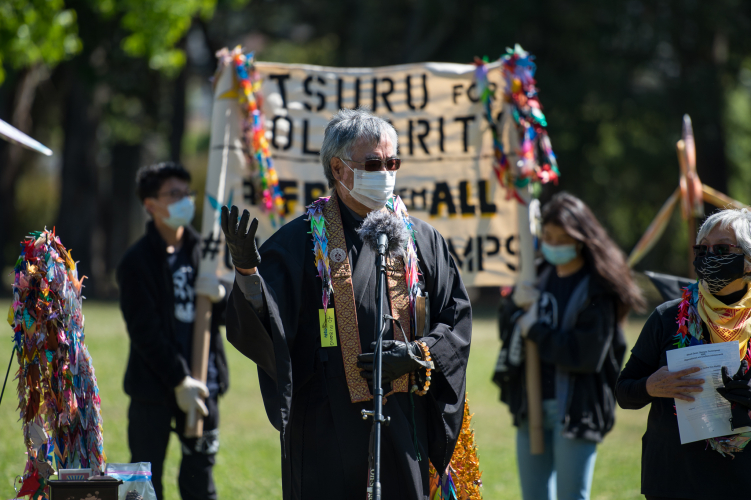 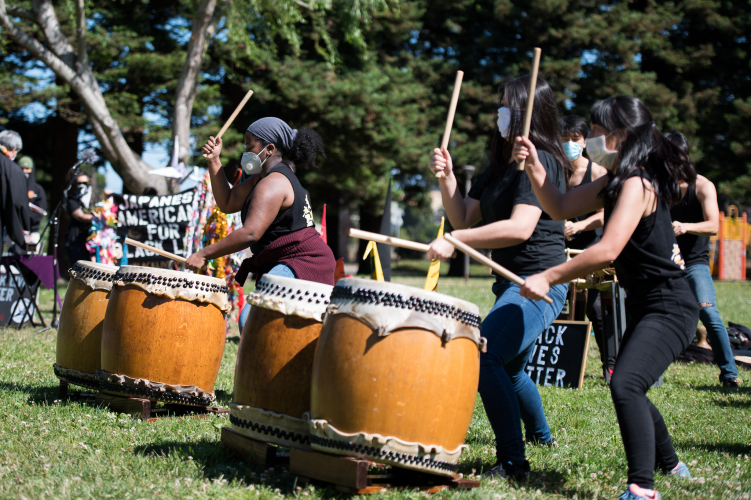 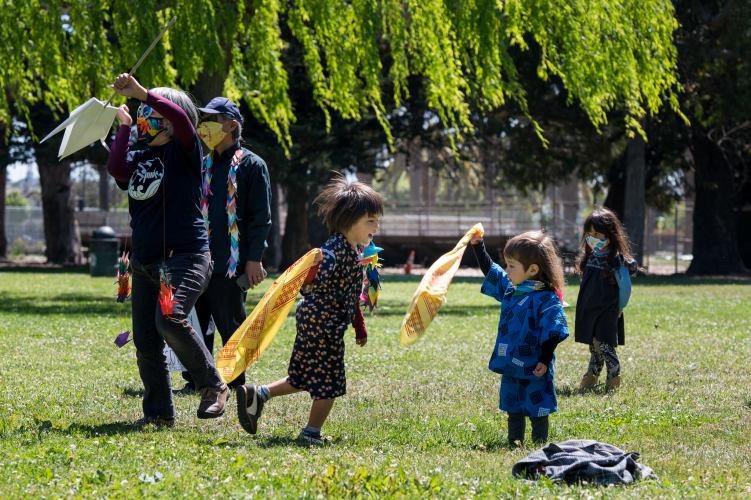 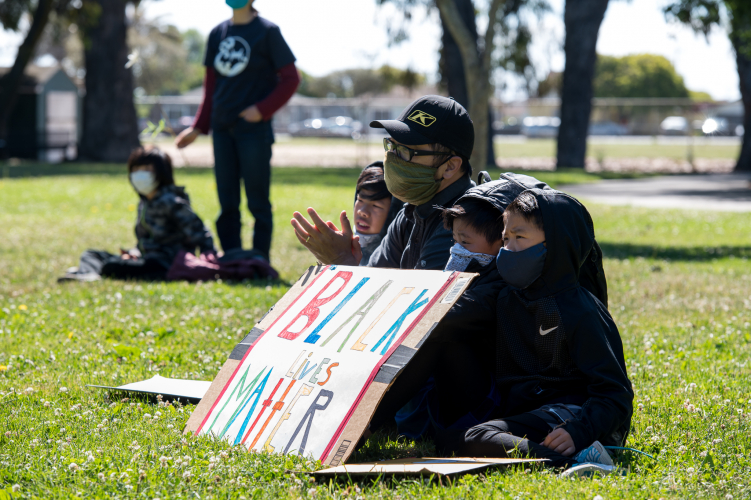 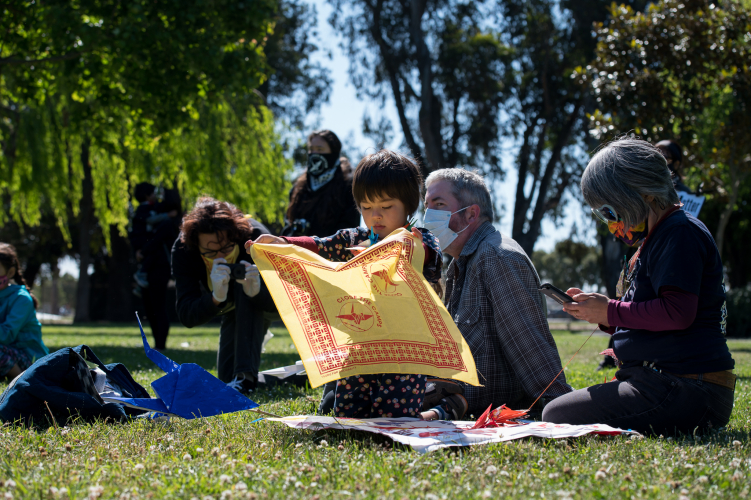