Add an Event
Newswire
Calendar
Features
Home
Donate
From the Open-Publishing Calendar
From the Open-Publishing Newswire
Indybay Feature
Related Categories: San Francisco | Global Justice & Anti-Capitalism
People’s Proclamation: Origins of 415 Day
by (S)olidarity (F)orever (C)ollective (SFC)
Thursday Apr 16th, 2020 6:31 PM
#415Day is about our culture, our freedom to create a way of life for ourselves in a city that we live, work, grieve, love and grow in. 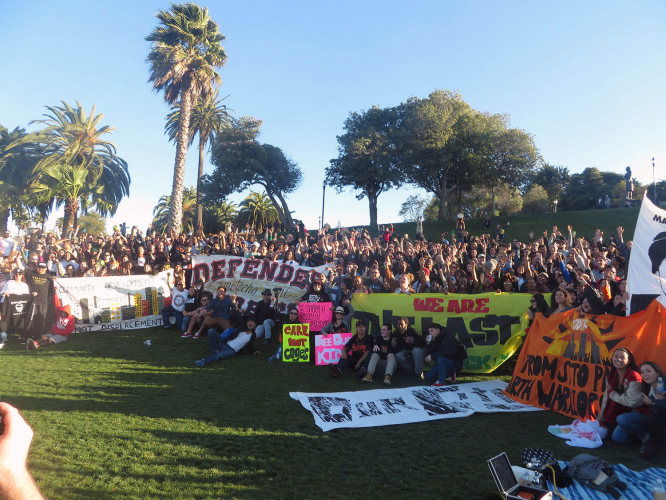 In 2016, the (S)olidarity (F)orever (C)ollective (SFC) united to found a people’s holiday known as #415day. This holiday was created as a community call to action to defend our hoods. The ultimate goal of this day is to celebrate and to build solidarity and principled struggle led by Black & Brown people with deep roots in San Francisco.

#415Day is about our culture, our freedom to create a way of life for ourselves in a city that we live, work, grieve, love and grow in. #415Day is about the lowriders cruising all the way down Mission Street without having to make a right turn. It’s about hopping on the back of the bus before all-door boarding was allowed. It’s about the 26 Valencia and the 15 Third Street. It’s about everything that the cities leadership and those in power have tried to take away from us, but the city’s spirit we managed to maintain in our hearts. The #415Day we created is not neutral—it is about taking a stance against corrupt politicians that have sold out our communities for top dollar knowing that the working and laboring class individuals and families wouldn’t be able to keep up with the cost of living.

We have seen the tides change during the COVID-19 crisis, many of those deemed to be working and laboring class are considered to be “Essential Workers.” It’s time for the old paradigms to shift.

The SFC is an autonomous and diverse network of students, organizers, educators, artists, and service providers who are born and raised in Frisco, we represent the everyday working people that make this city run. It is with our exploited labor and that of our ancestors, and relatives, that this city was built from the ground up. As a truly grassroots collective, we explicitly decided to approach planning for this day without permits, and without sponsorships. We do not take city or private funding. We do not collaborate or negotiate with private developers. We don’t fuck with the police. Drawing from examples set by other indigenous leadership like the Zapatistas, we (alterative wording: we believe that leadership is a collective responsibility)  believe that don’t center the leadership of any single individual. Each Black and/or Brown person who is suffering under racialized capitalism in this city, is the face of #415Day.

The #415Day community we belong to, knows that the revolution will not be sponsored or endorsed by London Breed. We do not allow ourselves to fall victim to the divide and conquer strategies of those in power, who aim to pit Black & Brown people against each other by way of manipulation, puppeteering, or offering short term pacifiers disguised as ‘wins’.

Now more than ever we need to unite during the COVID-19 pandemic to build community and honor the legacy of our ancestors in this city. We want #415day to be a platform for collaboration and action, as we collectively envision all the ways we deserve and need justice. While we practice social distancing, we’re #AloneButTogether. We intend to use our social media platform to support, uplift, inspire & connect our communities across San Francisco with a special live stream via Instagram for the people.

The real #415Day happens on 4/15 and is a celebration of our resilience and our resistance to being violently erased from our city. We invite our community to join us our #415day 2020 livestream, in our continued efforts to unite our communities to uplift our need for active Resistance, to celebrate our Resilience despite a rapidly changing and elitist city, and to remind ourselves of our collective power in demanding Restitution for our suffering and pain.

When we initiated this vision together, we were directly responding to a horrifying historical moment in our city: the corrupt politics led by Ed Lee, state sanctioned violence and police impunity that stole the lives of our beloved community members Alex Nieto and Mario Woods (among so many others), that ridiculous SuperBowl 50, the fight to stop the jail expansion and the hyper-gentrification that continues to displace us further out into other parts of the region. We came together to address issues like these that were created to destroy our communities. We’re still together five years later because there is still so much more work to be done. We created #415Day because the work must include celebration. We celebrate #415Day because despite all of the erasure and violence, we have survived. This is our city. This is our collective culture. And we are here to stay.

Over the past five years we have united hundreds of people under the message of Resistance, Resilience, and Restitution.

We do this out of love for our people, with the #SuckaFree loyalty and commitment to continue fighting for justice and liberation of those most impacted by poverty and oppression. We have inspired others across our community to also engage in a vision to #ReclaimSF in a variety of forms.

http://eltecolote.org/content/en/commentar...
Add Your Comments
Support Independent Media
We are 100% volunteer and depend on your participation to sustain our efforts!