Add an Event
Newswire
Calendar
Features
Home
Donate
From the Open-Publishing Calendar
From the Open-Publishing Newswire
Indybay Feature
Publish to Newswire
Add an Event
Related Categories: International | Racial Justice
Mohawk describes being kicked in head and choked by police at Tyendinaga
by Brenda Norrell
Thursday Feb 27th, 2020 11:54 AM
Punched, thrown on the ground, kicked in the head and choked by police on Tyendinaga land, Mohawk Land Defender Nick Kolbasook describes the attack by police in Tyendinaga on Monday. 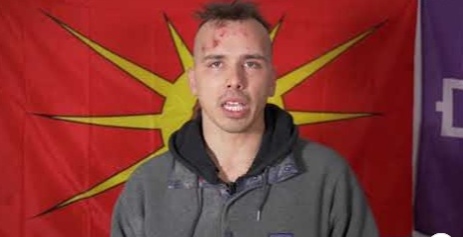 Nick Kolbasook, Akwesasne Mohawk, said Tyendinaga Mohawk asked for help as they made their stand in solidarity with Wet'suwet'en and it was his responsibility to help.

When the Ontario Provincial Police attacked the Tyendinaga alongside the rail tracks on Monday, he said, "I wasn't resisting."

Nick describes in this video how five police grabbed him, and two began punching him. Then they threw him on the ground.

"Two of them started punching me."

"They piled on me, drove me to the ground," he said, describing how they stepped on his arm.

"They began kicking me in the face," he said adding that they kicked him in the head.

"One of them got down and started choking me."

Nick was unable to breathe until the officer stopped choking him.

Then he was arrested and stuffed into a dog cage.

Nick said the police came on to Tyendinaga land and attacked the people. "This is all Mohawk territory."

"Our laws, our traditions were here before Canadian laws."

Nick's message is for people to have more compassion and understanding, and to take on more responsibility.

After the public viewed this video yesterday, there has been a widespread demand for felony assault charges to be filed against the Ottawa Provincial Police officers who committed this crime.

Real Peoples Media said, "In this video Nick Kolbasook speaks about what happened to him when the OPP violently attacked Mohawk people who refused to let trains run through their lands. The Mohawks objected to Canada committing an act of genocide by using the RCMP to forcefully remove the Wet'suwet'en people from their lands in order to run a pipeline through their pristine lands."

https://bsnorrell.blogspot.com/2020/02/moh...
Add Your Comments
Support Independent Media
We are 100% volunteer and depend on your participation to sustain our efforts!