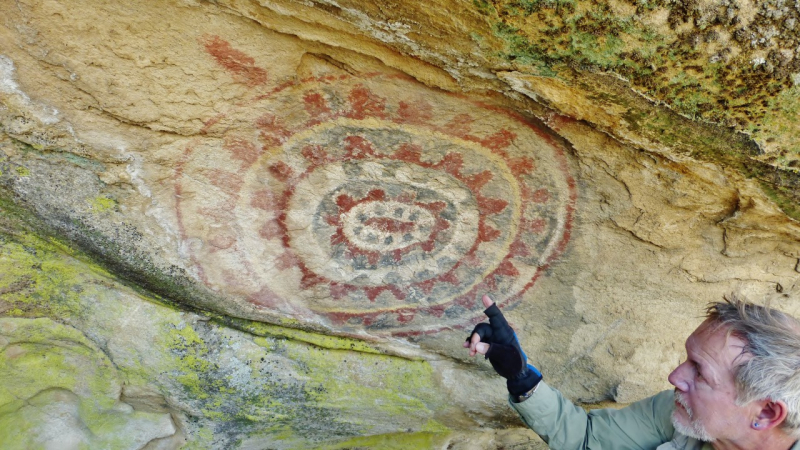 Videographer and Author Alex Kerekes is an expert on California Indian Country sacred sites. Alex is both a director and camera operator for his incredible series on his youtube channel called 'storiesbyalex'. It is a part of his series 'Finding Lost Civilizations' , on his youtube channel-'storiesbyalex' he visits and records amazing sacred sites of prehistoric and paleolithic California Indigenous peoples. Many of these sites that Alex treks to can range from 10,000 to 20,000 years of age.

His youtube channel has had close to 1.5 million views as well with other platforms that his videos are viewed on are over several million. He wanted to express during our interview his deepest appreciation to all that have watched his video series.

Alex states : " I want to share knowledge with people. I make my videos natural as they are really occurring in real time. I do not allow my videos to become one dimensional. The way I film it is happening as you see it. The viewer and I experience the same thing together."

" All of the prehistoric or paleolithic Indigenous sites I trek to are recorded by my video camera or photo images that I take. Everything that are at these sites such as exposed artifacts I document with my video camera. Nothing is collected or taken from the California sacred sites. I have greater knowledge of what I saw during my post-production work, in which I do more research on that particular site before that video will air."

" I can recall when I started this series about 10 years, I started with a five pixel hand held camera, which you could put on video mode which I would use to make my very first videos with. Eventually I would graduate to a state-of-the video Panasonic hand held video camera. Like I said with this technology everything is happening as you see it. When I go to these remote sites through out California, I am driven by emotion. I make this all educational, it peaks my curiosity. For I view curiosity as a search for knowledge. I tell people I am learning as I go."
At the end of each video segment that Alex has trekked to he states: " I see my path, but I do not know where it leads. Not knowing where I'm going is what inspires me to travel it."

1. How many trek videos have you done just in California?

In California I have visited several hundred sites and I have produced about 125 films which are California specific. I have also filmed in Arizona, Utah, Nevada, Colorado, Spain, Canada, Vietnam, Laos, and Thailand.

2. How many years has your youtube series- FINDING LOST CIVILIZATIONS been on and what year did it start in?

My series has been ongoing for almost 10 years. I started my YouTube series on 1 May 2009. To date, my channel statics show that that I have over 6,000 subscribers and 1,449,928 views. However, my videos are on other platforms and the views are in the several millions.
Also, before my YouTube channel I created a Web site called “storiesbyalex” (https://storiesbyalex.com/), which initially featured my books and then expanded to cross-link with my YouTube channel.

3. What is the primary focus or focuses that motivates you to trek to these California Native sacred sites?

Well, I think gathering knowledge, learning, and sharing are factors that drive me to visit these ancient site. I find it fascinating to be at a place where someone hundreds or thousands of years before me lived and created the canvas before me – it’s amazing.

4. As a one person director/ camera operator can you recall any dangerous encounters with wild animals such as cougar, wild pigs, rattlesnakes that you may have had while filming on location?

Many of my treks have been solitary and so there is always a risk of injury or even death in some of the remote sites that I have visited. I have encountered evidence of bear, mountain lion, coyote, and other potentially dangerous animals or reptiles during my journeys. However, I have been fortunate and have not had any close encounters. Most wild animals seem to want to avoid humans as much as humans want to avoid them.

5. What were some of the most outstanding California Ancient sites videos that you are particularly proud of?

Well, there are different categories of sites which have their unique characteristics depending on the culture that was in the area. For example, the Chumash people produced extraordinary paintings in caves and rock shelters, which are referred to as pictographs. Other groups produced outstanding rock carvings, which are referred to as petroglyphs. One memorable trek was in the Carrizo Plain area which had significance to the Chumash, Salinan, and Yokut people. After having filmed several locations and started to return home I encountered a baby elk laying on the roadway that had been abandoned by it’s herd. So, my colleague, Dave Landes and I stopped and tended to the baby elk. I was able to film that encounter as we tried to figure out a way to save the baby elk. So, that was a very special moment.

Regarding ancient village sites and petroglyphs symbols I would say the Teresa Village sites(there are two) in the Black Mountains located in Inyo county were very memorable. You could identify where several wickiups (home sites) were located, midden sites, and various locations where food was processed. Also, there were many fascinating petroglyphs interspersed within the village sites. So for me this site is a living, breathing, and visual testament to the history of humanity. You know, that in one way or another we truly are connected and when we realize this, we will see how foolish are the beliefs that we create to separate ourselves from the whole.

6. When you interact with these very historical and spiritual sacred sites on location, how does it make you feel?

Well, what comes to mind is this sense of awe that I feel when I am walking in the footsteps of the ancients. I find it amazing to encounter an object that another human may have held a thousand years ago and then to find myself holding the same object. I feel a sense of connection to humanity. I ask myself, who was that person, how did he or she live, what was his or her life like, and what happened to that person?

7. How do you view yourself as both a director/ camera operator when your are telling these stories about California ancient peoples, by which I mean you are able to share these stories with such a vast viewing audience and are able to record and document these sites before they vanish or are destroyed or desecrated?

I might mention that sometimes I receive emails from cultural groups saying they are not extinct and that they are here among us. Unfortunately, sometime the series title creates this misconception that I am talking about a vanished culture. However, the prime purpose of the series is education and to visit ancient sites that time has long forgotten. My observation is that most of mankind’s history has been lost in time.

8. I notice that you have a very remarkable and sensitive ability to translate or interpret pictographs and petroglyphs. Where did you learn these skills?

I am not necessarily confident in my abilities to interpret most of the symbols I encounter. Sometimes, it is very easy for scenes that depict every day life or are figurative, such as a hand-print. But, even those may have very different meanings when taken in context with what other symbols may be placed adjacent and around that symbol. Also, there are categories made during various spiritual ceremonies by natives under hallucinogenic influence. Often times, my commentary is simply a sensing of what I think the person meant to convey with their petroglyph or pictograph.

9. Have you had any formal training or just learning at each site you visit? But your knowledge on them is quite remarkable.

Before I visit a site I conducted quite a bit of research about the cultural group that resided in the area. Also, during the film editing and production phase I continue to research to insure that my information is somewhat accurate. I say somewhat, because there are instances where my information is not spot on. So, I often tell viewers that my purpose is to open a portal into their minds so that they can seek further knowledge. I tell them that the truth is out there should they seek it. My background is as an investigator and this has helped me in my approach to record these sites.

10. In your video that you filmed on Mountain Diablo in the Diablo Mountain range in the San Francisco Bay Area, you did an amazing video of one the caves there, where the Volvon Band of the Bay Miwoks left their amazing pictographs on the cavern walls when they would go there to do ceremony. Most of the pictographs are 10,000 years old if not more. How did it make you feel to be the presence of such a holy sacred site where ceremony was conducted over 10,000 years ago? Can you provide Quotes about how you felt at that site?

When I film a site there are several emotions that come to mind. Often times the viewer is seeing exactly what I see at the same moment. So, it a journey of discovery for myself as well as the viewer. I often say that I know not what lies ahead of me. This is very exciting and this was the case of the Mount Diablo ceremonial cave. I filmed as I entered and when I saw the images in the cave I was in a state of awe and wonderment. Some people say that I should not film these sites because they are sacred, but at the same time they are also knowledge. And what is sacredness without knowledge of its existence? It becomes a place lost in time.

11. How does it impact you knowing that you are sharing these incredible stories with your viewing audience?

The YouTube forum provides an ability for the viewer and the producer to communicate their observations. Consequently, I receive a lot of feedback from around the world and therefore I know that there are people who have an interest in seeking further knowledge. So, this loop of providing information and feeling a sense of awe and wonderment at a site along with receiving positive feedback encourages and motivates me to continue. The treks I have embarked upon have all given me a great sense of joy.