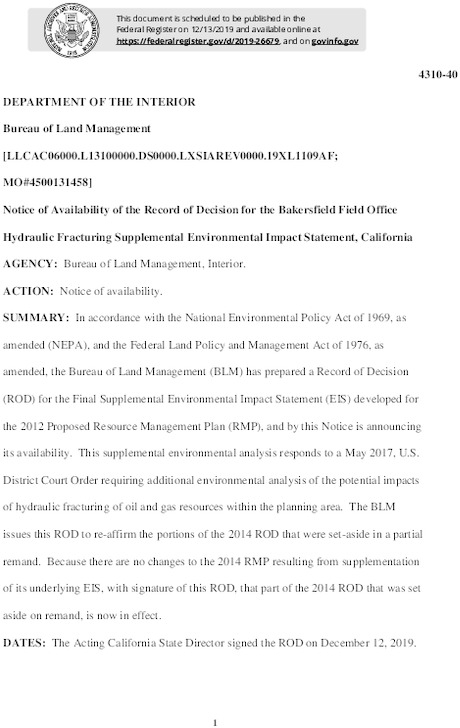 Download PDF (227.7KB)
BAKERSFIELD, Calif., December 12, 2019 — The Trump administration took the final step today to break a five-year moratorium on leasing public land in California for oil drilling and fracking, issuing a decision that will allow more than 1 million acres to be put on the auction block.

The plan sharply contradicts Gov. Gavin Newsom’s recently unveiled plan to protect Californians from oil industry pollution as part of a strategy to phase out oil production in the state.

“We won’t let California’s stunning public lands be fracked and drilled without a fight,” said Clare Lakewood, an attorney at the Center for Biological Diversity. “Trump and the oil industry want to expose our communities and wildlife to more toxic pollution. The future of our state and our fight against the climate crisis depend on stopping this vast fracking expansion in its tracks.”

Most of the land the BLM plans to open to the industry is in the San Joaquin Valley, which already has some of the most severe air pollution in the country.

“California's Central Valley is ground zero for environmental injustices that are the result of poor land-use practices and politicians who side with big industry,” said Gustavo Aguirre Jr., Kern projects coordinator with Central California Environmental Justice Network. “The way oil and gas extraction is permitted is a perfect example of this, and so is the most recent decision of the Bureau of Land Management allowing oil extraction in public lands, especially because these public lands are near disadvantaged rural communities and even next to the Cesar Chavez Monument. Allowing oil extraction in these public lands is wrong and something we need to stand up against.”

“Oil and gas companies are fighting the future,” said Samuel Molina, California state director of Mi Familia Vota. “We have to continue developing alternative, cleaner fuels and making electric vehicles more affordable for our communities. The Central Valley is number one for the worst air quality in the country. We can no longer afford worsening conditions for the children of these communities.”

“The oil and gas industry in our valley is already the largest stationary source of regional air pollution, pumping out fine particle pollution that is directly connected to asthma and heart attacks, alongside volatile organic compounds and oxides of nitrate that contribute to the formation of lung-damaging smog,” said Genevieve Gale, executive director of the Central Valley Air Quality Coalition. “Adding insult to injury, oil and gas production releases toxic air contaminants, such as benzene and formaldehyde, that are known cancer-causing agents. Our valley cannot take any more.”

“This plan is a gift to the fossil fuel industry paid for by today’s Californians and future generations,” said Rebecca August, director of advocacy at Los Padres ForestWatch. “It is reckless and irresponsible to allow new oil drilling and fracking without regard for the threat it poses to precious water resources, rare and dwindling wildlife habitat, and public health.”

“At a time when we need to be taking urgent action to address the climate crisis, the Trump administration's dangerous push to expand fossil fuel extraction on our public lands is a huge step in the wrong direction," said Gary Lasky, legal chair of the Sierra Club Tehipite Chapter in Fresno. “We'll continue to fight back against this threat to our public lands, our health and our climate."

The BLM has not issued a single new oil and gas lease in California since 2013, when a federal judge ruled that the agency had violated the National Environmental Policy Act by issuing oil leases in Monterey County without considering fracking’s environmental dangers.

In October the Trump administration announced it would allow fracking on an additional 725,500 acres across 11 counties in the Central Coast and Bay Area. Conservation groups filed suit in U.S. District Court in San Francisco to challenge that decision.

Fracking is an extreme oil-extraction process that blasts a mixture of toxic chemicals and water into the ground to crack open oil-bearing rocks. According to the BLM, about 90% of new oil and gas wells on public lands are fracked.