Newswire
Calendar
Features
Home
Donate
From the Open-Publishing Calendar
From the Open-Publishing Newswire
Indybay Feature
Publish to Newswire
Add an Event
Related Categories: East Bay | Arts + Action
Some exquisitely built guitars that most people can only dream of ever owning
by Lynda Carson
Thursday Oct 17th, 2019 1:55 AM
Photo of activist Fatdog, owner of Subway Guitars in Berkeley, playing a beautiful acoustic cutaway guitar that was built in the guitar workshop of Oakland's world famous luthier/guitar builder Ervin Somogyi! Photo by Michael Graham 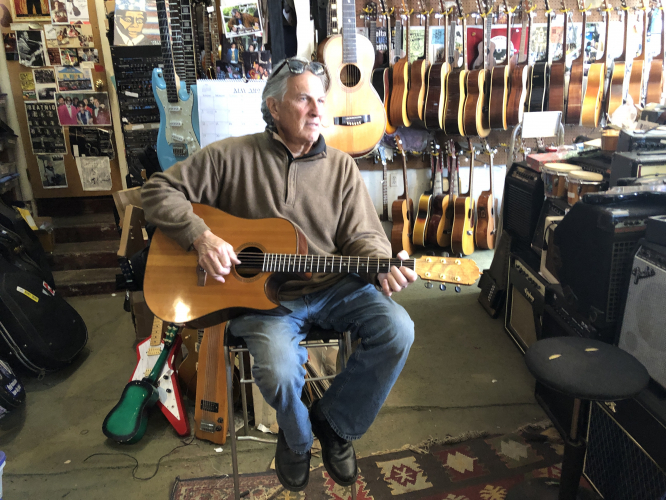 Oakland - This article is dedicated to all the poor, peace and social-justice activists out there who are guitar lovers that can only dream of ever owning one of the exquisite high-end beautiful guitars that are available for sale with Dream Guitars.

I am referring to the beautiful rare high-end guitars that remain out-of-reach for most people except the wealthy guitarists and collectors who can afford to pay tens of thousands of dollars for a rare handmade high-end guitar.

The latest new arrivals at Dream Guitars are so high-priced that they are out-of-reach for most guitarists, and appear to be rare exquisitely made guitars that most people could only ever dream of owning.

Yesterday, a beautiful drop dead gorgeous 1982 Gibson D’Angelico - Model New Yorker archtop electric guitar became available for the mere asking price of $15,445. Or for those out there that have some excess cash on hand, this rare beauty may be bought for a mere $14,995 in cash. As they say, cash is King.

According to Dream Guitars, “This is a unique and interesting guitar built at the Gibson factory by one of their top luthiers, Aaron Cowles, built for a collector who asked for it to be an homage to D'Angelico. Aaron had the opportunity to actually spend time with Johnny Smith's personal guitar and get measurements from it before building this beautiful instrument to honor the maker. Simply incredible craftsmanship, you can tell everyone involved was passionate about capturing the essence of the man John D'Angelico in this lifetime and dedication to the archtop guitar.”

Speaking of rare collectible guitars that became available only 2 days ago, an exquisite beautiful handmade 2019 Somogyi Studio, Wenge/Sitka Spruce, acoustic florentine cutaway steel string guitar appeared for sale with Dream Guitars, for the regular asking price of $35,015, or a mere $33,995 for those willing to pay cash. This rare handmade guitar was made in the guitar workshop of Ervin Somogyi, in Oakland, CA.

Years ago, famed luthier Ervin Somogyi was an Oakland activist who used to collect tools for the Sandinistas down in Nicaragua.

Ervin Somogyi’s handmade guitars built in Oakland, are some of the finest quality guitars that can be found anywhere, and are highly sought after by professional guitarists, and collectors. And that’s only if you can find a rare Somogyi guitar that is actually available for sale. This beauty has a Sitka spruce top, Wenge for it’s back and sides, a mahogany neck, rosewood bridge, ebony fingerboard, and a gorgeous French polish finish to maximize the quality of its sound. Local guitarists including the fantastic guitarist Alex de Grassi and Will Ackerman of Windham Records owned some Somogyi guitars, in addition to the incredible guitarist Michael Hedges of Marin County, before he passed away from an accident. A top of the line incredible sounding guitar, this 2019 beautiful acoustic guitar made by Ervin Somogyi is an exquisitely built handmade guitar that most people can only dream of ever possessing.

Among the other guitarists that have owned a Somogyi guitar of Oakland, famed environmental activist John Denver owned 2 Somogyi guitars before he passed away from a plane accident. Reportedly, “In 1986 John Denver commissioned luthier Ervin Somogyi to build a matching pair of guitars. One was a six string and the other was 12 string guitar. These instruments featured Sitka spruce tops, Brazilian rosewood was used for the backs, sides and bridge saddle. The necks were made of Honduras mahogany. The guitars were both featured a single Florentine cutaway and decorative inlays starting at the 3rd fret. The headstocks had an unusual design, ending in a point. The bridge saddle also featured an extremely stylistic design.”

Another drop dead gorgeous acoustic cutaway handmade steel string guitar built by James Olson in 2011 appeared for sale in recent days with Dream Guitars. This fantastic beauty with exquisite inlays has a cedar top, and Brazilian rosewood for its back and sides, with a Brazilian rosewood neck. This rare beautiful sounding handmade guitar can be had for the regular asking price of $51,495, or for only $49,995 if one pays in cash.

Another beautiful handmade guitar made by James Olson that is available with Dream Guitars for a mere $36,995 is not a guitar that your average poor, peace and social-justice activist can ever afford. Not unless the activist ends up suing the cops and the City of Oakland for millions of dollars for being brutalized while protesting on the streets against one of the many social-injustices occurring in Oakland on a daily basis.

Another beautiful handmade acoustic steel string guitar made of Brazilian rosewood and moon spruce that became available recently with Dream Guitars, is a Tippin guitar, for the regular asking price of $25,745, or for only $24,995 for the cash price.

A more affordable beautiful Raymond Kraut guitar is also available with Dream Guitars for the regular price of $14,415, or the cash price of $13,995. Raymond Kraut was an apprentice of Ervin Somogyi in Oakland, a town well known for its peace and social-justice activists.

original image (4032x1960)
Photo of a very rare Kay electric lap steel guitar from 1939, that was bought at a Flea Market at Laney College back in 1985, which is owned by Lynda Carson. 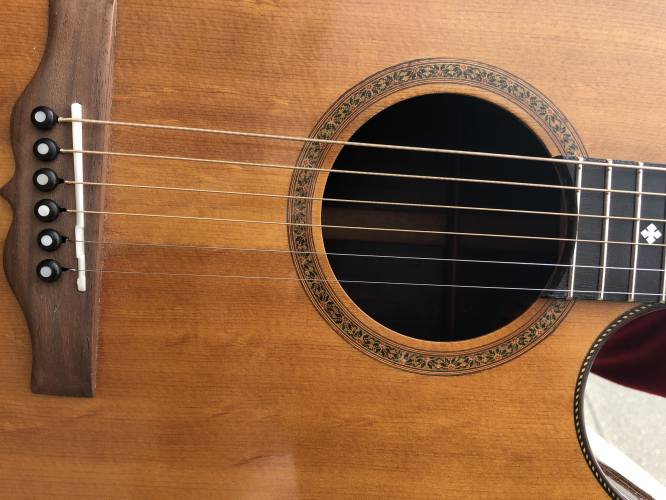 original image (4032x3024)
Photo of a close up view of the bridge & soundhole of an acoustic guitar that was built in guitar workshop of Ervin Somogyi by Lynda Carson back in 1985. 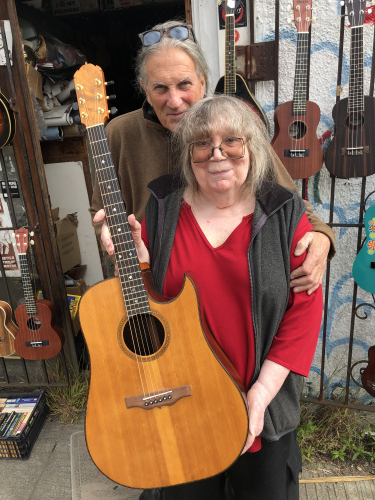 original image (3024x4032)
Photo of Fatdog & Lynda Carson in front of Subway Guitars on June 1, 2019, with a beautiful handmade acoustic steel string guitar that was made by Lynda Carson in the guitar workshop of Ervin Somogyi in 1985. The handmade guitar has a Sitka spruce top and Indian rosewood for the back and sides of the guitar.

I received emails from "2" luthiers/guitar builders regarding the article above called, "Some exquisitely built guitars that most people can only dream of ever owning."

There was one email from England claiming that it was a great article, but that it was bemusing.

The other email from Petaluma, was wondering why I did not mention his guitars that are posted with Dream Guitars.

Please accept my apologies to any and all luthiers/guitar builders out there that may have felt offended by my story, or left out.

As a person who loves the beauty of handmade guitars, I can certainly understand and can only admire how much time, effort and skill it takes to create a beautiful stringed instrument. And I am happy to see that people are being financially compensated for the hard work they do to create such beautiful instruments.

The joy these instruments bring to millions of people who listen to the wonderful music created with these fantastic creations, is incalculable.

However, in my humble opinion, guitars are meant to be played. That is the main function as to why a guitar exists.

When the capitalist guitar selling market/businessmen reaches out and intentionally profits by selling guitars to collectors with loads of money, instead of selling the stringed instruments to guitar players, it deeply saddens me to know that these beautiful instruments are not being used as intended, and are out-of-reach to the many musicians that would love to play some music with them.

This is just my humble opinion, and I hope this clarifies any or all people bemused by my article, or offended.

My sincere apology to Ervin Somogyi if you are offended by my mentioning that you helped people out in Nicaragua for humanitarian reasons, by helping to collect tools for them to build schools, and housing.

I was deeply impressed by your activism, and forgot that this may have been a personal matter that you may not have wanted to be written about. Sorry Ervin.... Please forgive me. I have lived in the Bay Area for so long, that I forget at times that some things are best left unsaid publicly because of the times we live in.

The Nicaragua Information Center began as a student organization at the University of California, Berkeley. The organization moved off campus in 1981, and eventually grew large enough to support a full-time paid staff of five, in addition to many volunteers. NIC published Nicaraguan Perspectives, an important national magazine on Nicaragua between 1980 and 1991. NIC also formed the Berkeley-Leon Sister City Association in 1985.

The Center provided alternative information about Nicaragua, coordinated opposition to U.S. policy in the Bay Area and much of the west, and played an active role both in raising material support for Nicaragua and facilitating travel by individuals to and from Nicaragua. In addition, the Nicaragua Information Center served as the Pacific Southwest Regional Coordinator for the Nicaragua Network from 1983 through 1992. In this role, NIC played an influential role in developing and coordinating national policy for the movement in support of the Sandinista regime. This included anti-Contra aid agitation and person-to-person exchanges. Through delegations and work brigades, the Center helped hundreds of people travel to Nicaragua. Working with various coalitions, the Nicaragua Information Center played a central role in the political struggle against aid to the Nicaraguan Contras and raising material support for Nicaragua.