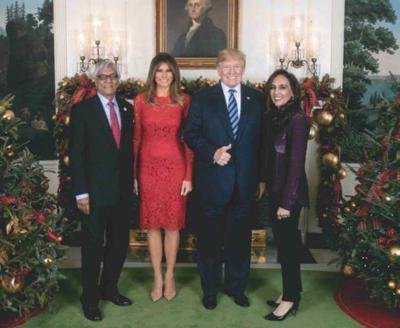 "Save KPFA" Supporter Greets Trump On Visit To Bay Area
"Trump was greeted at the airfield by Harmeet Dhillon, a GOP committeewoman from California, and her husband, Sarvjit Randhawa."
Sarvjit Radhawa Was A Member and Big Supporter of
"Save KPFA"

President Trump waves to supporters after arriving aboard Air Force One at Moffett Federal Airfield in Mountain View, Calif. to attend a Republican Party fundraiser at an undisclosed location on Tuesday, Sept. 17, 2019.Photo: Paul Chinn / The Chronicle

President Trump arrives aboard Air Force One at Moffett Federal Airfield in Mountain View, Calif. to attend a Republican Party fundraiser at an undisclosed location on Tuesday, Sept. 17, 2019.Photo: Paul Chinn / The Chronicle

President Trump waves to supporters after arriving aboard Air Force One at Moffett Federal Airfield in Mountain View, Calif. to attend a Republican Party fundraiser at an undisclosed location on Tuesday, Sept. 17, 2019.Photo: Paul Chinn, The Chronicle
President Trump landed at Moffett Field in Mountain View on Tuesday for his first visit to the Bay Area since taking office, shortly after warning that San Francisco and other California cities were “destroying themselves” with homelessness.

Trump was greeted at the airfield by Harmeet Dhillon, a GOP committeewoman from California, and her husband, Sarvjit Randhawa. They were joined by Robin Aube-Warren, acting associate director of NASA Ames Research Center, which operates the former naval air station. Trump then left for a fundraiser in Portola Valley without speaking with reporters.

The president arrived in California fresh from a campaign visit to New Mexico, where he spoke to a large and enthusiastic crowd at a rally outside Albuquerque. By contrast, his hours-long stop in the Bay Area was a stealth visit, where even the people who paid thousands to attend the sold-out fundraiser were not told in advance where the event would be held.


However, en route to California aboard Air Force One, Trump had plenty to tell reporters about one of the state’s biggest problems, homelessness.

“We can’t let Los Angeles, San Francisco and numerous other cities destroy themselves by allowing what’s happening,” the president said. “And I’m speaking to tenants — in some cases foreign people, foreign tenants — but they have where they’re tenants in buildings throughout various cities in California, and other places ... where they want to leave the country. They can’t believe what’s happening.

“Where our policemen that are on the beat are getting sick,” Trump said. “They’re actually sick. They’re going to the hospital. We can’t let that happen.”


“In many cases they came from other countries and they moved to Los Angeles or they moved to San Francisco because of the prestige of the city, and all of a sudden they have tents. Hundreds and hundreds of tents and people living at the entrance to their office building. And they want to leave.

Trump didn’t venture what that might be, other than to say he was looking into the creation of an “individual task force” and talking with his housing and urban development secretary, Ben Carson, “in terms of the housing element.” Carson was in San Francisco on Tuesday, touring the Potrero Hill public housing project.

Protest confronts President Trump during first Bay Area visit...
Trump’s visit came a week after a White House task force paid a much-publicized visit to Los Angeles to talk about that city’s homelessness problem, amid speculation that the administration was pondering unspecified ways of weighing in on homelessness in California.

Trump had no scheduled public events and was expected to fly to Southern California for more fundraising after meeting with donors on the Peninsula. It was widely reported that the location was the Portola Valley home of Scott McNealy, a co-founder and longtime CEO of Sun Microsystems.

About 60 Trump supporters waited on the runway at Moffett Fied for an hour to greet Trump. As he stepped down from Air Force One, the president waved to his supporters, pumped his fists a few times and then was whisked away in the motorcade.

Mary and Steve Shambaugh from Newark hoped for more interaction with the president, but were happy to at least catch a glimpse.

“We want to encourage him and let him know that there are people behind him in California, believe it or not,” said Mary Shambaugh, 56.

“He understands a lot of the issues that California is going through, mainly economic issues, homelessness and the need for economic opportunity for all groups,” Singh said.

Also eager to see Trump, though for different reasons, were protesters near McNealy’s home. The president’s motorcade arrived at the site of the fundraiser at 11:43 a.m. Reports from the press pool traveling with Trump said several dozen protesters with a large “Chicken Trump” balloon and a number of anti-Trump signs were visible.

The lunch event is expected to raise $3 million for president’s re-election effort.

Vigil for Democracy was holding a protest near NcNealy’s home, with the “Giant Baby Trump” balloon in attendance. Kira Od held up a drawing about the size of a flag that depicted Trump with a long nose.

“I don’t want Donald Trump to avoid seeing some people are so upset by his behavior that they are willing to spend hundreds of hours to express their dismay,” she said.

Trump is slated to attend another fundraiser Tuesday night in Los Angeles, where an administration task force visited last week to talk with officials about that city’s homelessness problem.

The president has fundraisers planned in Los Angeles and San Diego Wednesday before he returns to Washington, D.C.

Concerned Listener/SaveKPFA Loyalist Marries The Chair of the SF Republican Party
by Repost
Sunday Apr 24th, 2011 12:57 PM
Sarvjit Randhawa a Concerned Listener/SaveKPFA loyalist elected to the Pacifica National Board by the CL/SK, married Harmeet Dhillion the current Chair of the San Francisco Republican Party. She did fund raising for the Bush re-election campaign in 2004.
Now we know why Dhillon's law firm has been donating legal services to the Concerned Listeners' legal causes. In the SF Chronicle she said that one of her goals is to convert her new husband to the Republican Party. Sarvjit should fit right in given his several years working with the Concerned Listeners/Save KPFA folks who practice win at all costs, truth be damned, just like the Grand Old Party ( and the Democratic Party).

Have you forgotten their mantra:

"How can we make our enemies own the problems that are to come?" Brian Edwards-Tiekert

Problems like the massive deficits they brought to KPFA by over hiring their allies when the revenue was down, and refusing to do layoffs as needed and then screaming "union busting" when a new leadership made the cuts necessary to stay out of bankruptcy.
https://www.sfchronicle.com/politics/artic...
Add Your Comments
§Former KPFA Save KPFA Board Member Randhawa Gets Trump Handshake
by repost
Tuesday Sep 17th, 2019 9:20 PM 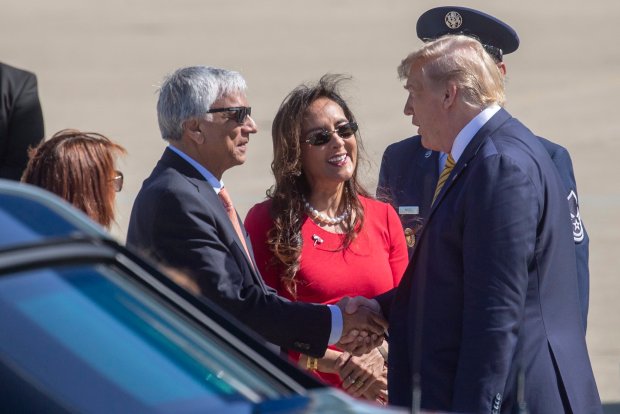 "Save KPFA" Former Board Member and Supporter Sarvjit Randhawa got a handshake from Trump.
Add a Comment
Support Independent Media
We are 100% volunteer and depend on your participation to sustain our efforts!