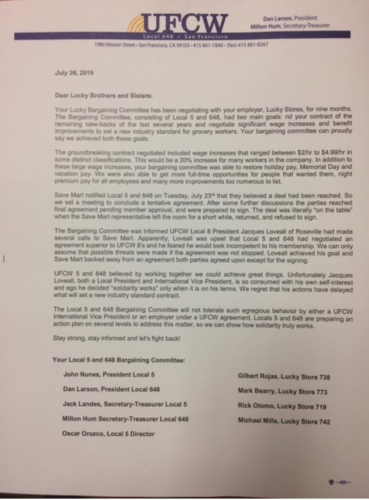 original image (945x1280)
Well that is exactly what has recently happened according to a recent letter that has surfaced from one of the sister locals!

What lesser contract has Jaques Loveall negotiated for the thousands of members of UFCW Local 8 Golden State?

Add Your Comments
§Retracted and removed from local 5's and 648's website
by concerned member
Friday Aug 2nd, 2019 9:57 AM
The info/letter you shared was retracted/removed from Local 5 and 648's websites for inaccurate and misleading info and the union removed it from the stores breakrooms right after they posted it
Add a Comment
§Some Loveall family history
by Local 5 member
Friday Aug 2nd, 2019 7:38 PM
Read more here:
https://www.indybay.org/newsitems/2006/01/24/17977611.php?show_comments=1
Add a Comment
Support Independent Media
We are 100% volunteer and depend on your participation to sustain our efforts!