A pair of labor historians talked about unions and San Francisco’s waterfront Saturday as they guided a tour past some of the key points in that long-running struggle by maritime workers as part of the monthlong LaborFest in the city.

Peter O’Driscoll, wearing a San Francisco Giants cap, stood on the steps of Hills Plaza on Folsom Street and asked the crowd, “What is the first principle of organized labor? What is the one thing labor unions stood for?”

“Share the wealth,” O’Driscoll said over the din of workers power washing the plaza walkway. “This is a rich, wealthy country, especially when you think of California during the Gold Rush. Labor unions said, ‘We need to share the wealth with workers who are in misery, so that there is a certain amount of benefit for our fruitful labor.’ Share the wealth.”

O’Driscoll and his colleague, Laurence Shoup, guided the group through the story of the workers who labored on San Francisco’s waterfront, such as sailors, longshoremen, porters, and teamsters, who formed a union in 1900. The tour is one of dozens of historical walks, films and readings throughout July that focus on San Francisco’s long history as a center for the labor movement.

Tour the historic Old Mint
The historians led the crowd through the plaza, past the towering statue of a man guzzling coffee — originally designed as a trademark for Hills Bros. Coffee — and up the Embarcadero, even as traffic noise drowned out much of the talk.

Shoup, whose book “Rulers and Rebels” chronicles California life from 1769 to 1901, spoke about the two-month strike in 1901 that was led by the Teamsters Union.

Waterfront employers created their own workers’ association, Shoup said, and “laid down the gauntlet” by telling the workers to either quit their jobs or quit the union.

Gifford Hartman, 57, pulled out a notebook, peered down under the brim of a black Adidas cap and scribbled notes to himself.

“I knew a little bit about the 1901 City Front Federation Strike, but his book is probably the authoritative source, and that kinda reinforced my own knowledge,” Hartman said.

Hartman was just one of the people taking notes. One man found a blank piece of white paper in his canvas bag and started scribbling in pencil as Shoup described the outbreak of violence between workers and “gun thugs” hired by employers in an attempt to break the strike.

“They were up to 1,000 people who would come out of their houses (in San Francisco) and throw rocks at the scabs,” Shoup said, referring to workers employers had brought in from Benicia, Vallejo, and as far away as Ohio to take the place of striking workers.

“Of course the cops were told to beat the strikers, so the cops would wade into these crowds of people that were supporting the strike and just beat people to a pulp,” he added.

By September 1901 — roughly two months into the strike — there were gun battles in the streets, Shoup said.

The strike ended in part because of the concerns of Southern Pacific Railroad officials hurt by the work stoppage.

They “put pressure on the employers association to back down because ‘we don’t want our harvest to be sitting and rotting on ships,’” Shoup said.

The participating unions went on to create the Union Labor Party and “ruled San Francisco” until about 1909. San Francisco was the first large city in the United States to have a union labor party in office, Shoup said.

James Chionsini, Jr. 54, joined his 17-year-old son, Day, for the tour after attending a LaborFest tour guided by Shoup a couple years ago.

“I thought it was really dense and fascinating,” Chionsini said. “There is a lot of interesting trivia and radical suppressed history of worker struggles and battles and things.”

There has always been something to learn from the LaborFest events he’s attended, Chionsini said. This year, he said the conversation around labor makes him consider what can be done to deal with the effects of poverty in the Bay Area and the country.

“I understand capitalism creates poverty, just as that creates wealth, but I would like to see that shift a little bit, and would like to see more things benefit people who are totally excluded,” Chionsini said with a shrug. The government “could learn a lot of this stuff, I think, but they don’t listen to me.”

Participants ended the tour by peering up at murals depicting various moments in California and United States history in the Rincon Annex post office on Mission Street.

The group blended in with a second cluster of people from another LaborFest tour in the echoing hall of the annex lobby.

“I think history is so important,” Hartman said. “Not in an abstract way, but in a way that we can kind of empower ourselves to right injustices and overthrow racism.’ 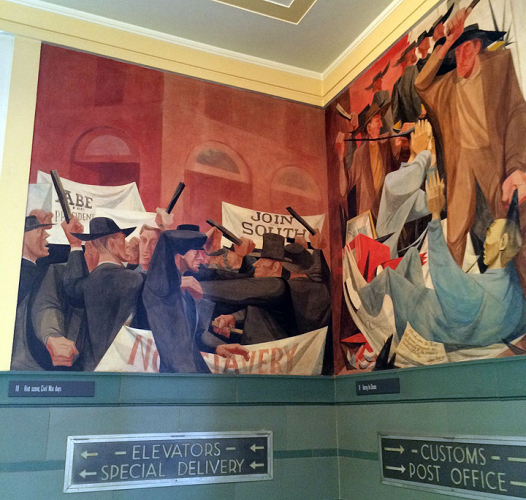 original image (720x684)
The murals expose the hidden side of San Francisco history and anti-communists and rightwingers tried to destroy these murals in the 1950s.
https://www.sfchronicle.com/bayarea/articl...
§ILWU CIO Rallied To Defend Rincon Murals
by Lauren Hernández Monday Jul 22nd, 2019 9:56 AM 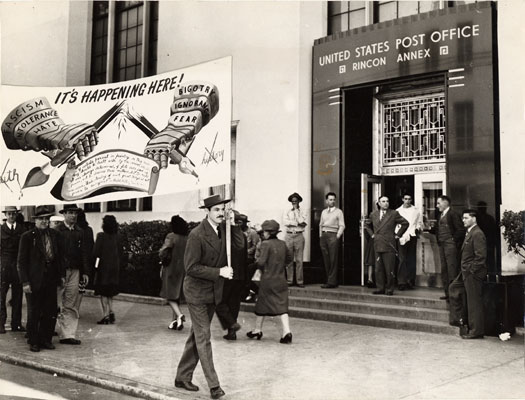 During the anti-communist hysteria during the 1950's there was an effort to destroy these Rincon Annex murals. The ILWU-CIO held a protest rally to defend the murals and fight the rightwing attack.
https://www.sfchronicle.com/bayarea/articl...
Add Your Comments
Support Independent Media
We are 100% volunteer and depend on your participation to sustain our efforts!