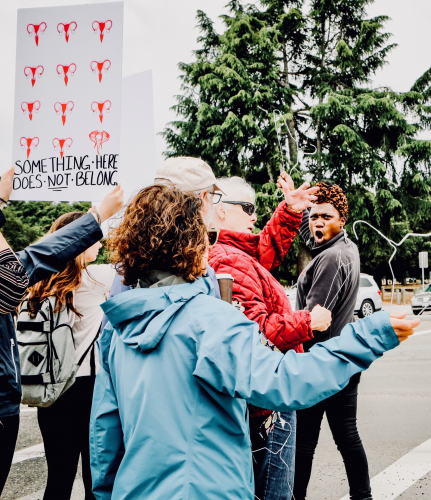 The American College of Obstetricians and Gynecologists (ACOG) told reporters that so-called "heartbeat bills" which have passed in Georgia, Alabama, and Ohio in recent weeks should be referred to as "six-week abortion bans."

Using the term "heartbeat bill," as the mostly-Republican lawmakers who have pushed the regulations have, suggests that doctors can actually detect a fetal heartbeat at six weeks of pregnancy.

In fact, ACOG President Dr. Ted Anderson told The Guardian, "what is interpreted as a heartbeat in these bills is actually electrically induced flickering of a portion of the fetal tissue that will become the heart as the embryo develops."

The six-week cut-off which has been pushed in several states is "arbitrary," added Anderson, and "[does] not reflect medical accuracy or clinical understanding."

Other critics have made similar arguments, saying the anti-choice movement is interested not in protecting fetuses and six-week-old embryos but in controlling women's reproductive choices and attacking Roe v. Wade, the 1973 Supreme Court decision which affirmed that American women have the right to abortion care.

ACOG's recommendation came a day after the United Nations deputy commissioner on human rights, Kate Gilmore, denounced recent anti-choice laws in the U.S. as products of "extremist hate" aimed at women and called on rights advocates "to stand with the evidence and facts and in solidarity with women."

As women's rights advocate and author Rebecca Solnit wrote in The Guardian this week, the anti-choice movement has recently gained ground in its effort to curtail women's reproductive rights through the use of blatant lies about abortion care, specifically their claim that women and doctors commit infanticide during rare abortions which take place in the last trimester of pregnancy—often when the pregnant patient's life or health is at risk or when fetal abnormalities have been detected.

With its warning on Wednesday, ACOG suggested that misleading language about abortions early in pregnancy are part of that strategy as well.

"Anti-abortion laws are built on anti-abortion lies," wrote Solnit. "Lies about things like who has abortions, how abortions work, how women's bodies work, and how fetuses develop. The lies pave the way for the laws."

"To defeat the laws," Solnit added, "we must fight the lies."
https://www.commondreams.org/news/2019/06/...
Add Your Comments
Support Independent Media
We are 100% volunteer and depend on your participation to sustain our efforts!