Add an Event
Newswire
Calendar
Features
Home
Donate
From the Open-Publishing Calendar
From the Open-Publishing Newswire
Indybay Feature
Publish to Newswire
Add an Event
Related Categories: Central Valley | Media Activism & Independent Media
Keep Free Speech Alive
by Mike Rhodes (mikerhodes [at] comcast.net)
Thursday May 23rd, 2019 1:32 PM
For 23 years the Community Alliance newspaper has served as a voice for the voiceless and a space where union and progressive activists have come together to demand a better Fresno. We need your Support by attending the Alliance Fundraiser 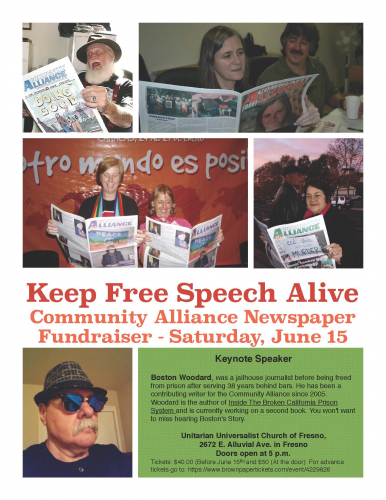 Thanks to the generous support we have received from our wonderful readers, we have been able to print the May 2019 issue of the Community Alliance newspaper. If you appreciate this newspaper and want to see it printed for the rest of the year, we need you to continue the momentum as we make our financial situation more sustainable.

We are asking you to subscribe, become a monthly sustainer and/or to make a donation. You can do that right now at https://fresnoalliance.com/subscribe/ or clip and mail in the subscription form in this issue of the newspaper.

You understand why we must keep free speech alive and thriving in Fresno. This newspaper does such a good job of giving a voice to the voiceless, informing readers about important events in the community and sharing a progressive narrative on issues ranging from environmental justice to ending homelessness that without it the political landscape in Fresno and the surrounding areas would be forever changed.

If you don’t want to see builders, developers and conservative politicians dancing for joy in the street, you need to dig a little deeper and support this paper.

In addition to this plea asking you to contribute, we are also planning a major fund-raiser. The event will be held on June 15 starting at 5 p.m. at the Unitarian Universalist Church (2672 E. Alluvial Ave.). The Keep Free Speech Alive fund-raiser will feature Boston Woodard as our keynote speaker.

Woodard was a jailhouse journalist. He was released from prison in November 2018 and is currently on parole in San Jose. During the 38 years of his incarceration he became a writer, musician, literacy tutor, event organizer and prisoners’ rights activist. His articles have appeared in the Community Alliance for more than a decade.

Woodard has been writing about the prison system’s failures and abuses for nearly three decades in both free world and prisoner publications. Woodard’s writing embarrassed and angered prison officials who all too often operate without public oversight.

For exercising his First Amendment right to define his surroundings he was put in the hole/solitary confinement (administrative segregation), had his mail tampered with, was subjected to verbal threats, had his personal property stolen or destroyed, and was illegally and adversely transferred from prison to prison. Still, Woodard refused to be intimidated.

Woodard has been a contributing writer to the Community Alliance since 2005. He is the author of Inside the Broken California Prison System. The book will be available for purchase at the June 15 fund-raiser and is available at Amazon.com. He is currently working on a second book that will be published later this year.

Joining Woodard on stage will be Marvin Mutch, a formerly incarcerated prison reform activist and co-founder of both My Brother’s Keepers and the Men’s Advisory Council, a prisoner advocacy group first established inside San Quentin to represent the collective needs and grievances of California’s prisoners. Mutch served 41 years of an indeterminate seven-year to life sentence for a wrongful conviction suffered in 1975. He was freed in February 2016.

Today, Mutch is a criminal justice reform lobbyist, director of advocacy at the Prisoner Reentry Network and associate director of the Humane Prison Hospice Project. After a lifetime of experience in the foster care, juvenile justice and adult correctional systems, Mutch is applying his deep understanding toward advancing the human rights of system-affected children and incarcerated people everywhere.

Tickets to the fund-raiser are $40 and can be purchased at https://www.brownpapertickets.com/event/4229826 , by mail at Community Alliance, P.O. Box 5077, Fresno, CA 93755, from Community Alliance board members, staff and volunteers. Or you can buy them at the door for $50.

The future of progressive journalism is in your hands. As we know you don’t want to see a gaggle of fat cats dancing in the street, we are waiting anxiously to see how much you value this local, independent and alternative publication. Send in your contribution today, and join the heroes and heroines pictured on this page.
*****
Mike Rhodes is an independent journalist and the writer of Dispatches from the War Zone: Homelessness in Fresno 2002–2015. Contact him at mikerhodes [at] comcast.net.
Add Your Comments
Support Independent Media
We are 100% volunteer and depend on your participation to sustain our efforts!