Add an Event
Newswire
Calendar
Features
Home
Donate
From the Open-Publishing Calendar
From the Open-Publishing Newswire
Indybay Feature
Publish to Newswire
Add an Event
Related Categories: International | Environment & Forest Defense | Health, Housing & Public Services
‘If the land is sick, you are sick’: An Aboriginal approach to mental health in times of drought
by Georgina Kenyon, Mosaic
Wednesday May 1st, 2019 2:22 AM
In Australia, psychological tools developed with Aboriginal people can also support farmers whose land is suffering the effects of climate change. 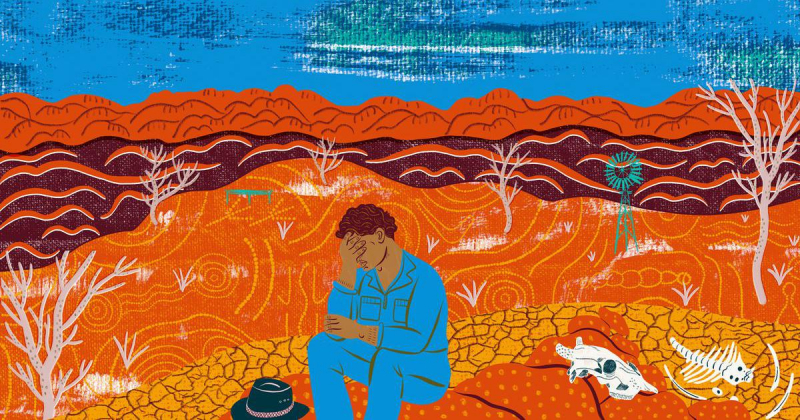 original image (1200x630)
A coal truck roars past, stirring up red dust that blows over the famished cattle and sheep lying in grassless paddocks. The carcasses of dead kangaroos lie next to empty water troughs. There is no birdsong.

Some say it has been the worst drought in a century here across the central and eastern part of Australia. As in other parts of the world, climate change and land clearing are driving soaring temperatures and extreme weather events, including heatwaves and droughts. Australia already sees several weeks each year when temperatures climb above 45ºC, but few people were prepared for the drying-up of dams and waterways.

Food insecurity is now a real threat in parts of the country as livestock and wildlife are dying in inner New South Wales. Farmers are struggling; rates of depression and anxiety are increasing among those who stay.

“I was sleeping for 15 hours a day,” says Richard, a cattle farmer living near White Cliffs in western NSW. “I felt so sick and tired I thought I had cancer. But it was depression.”

His depression hit just before this drought, and was brought on, he thinks, by extreme stress and family issues. But drought only adds to farmers’ stress: it degrades the land, which makes it harder to earn a living.

https://scroll.in/pulse/921558/if-the-land...
Add Your Comments
Support Independent Media
We are 100% volunteer and depend on your participation to sustain our efforts!