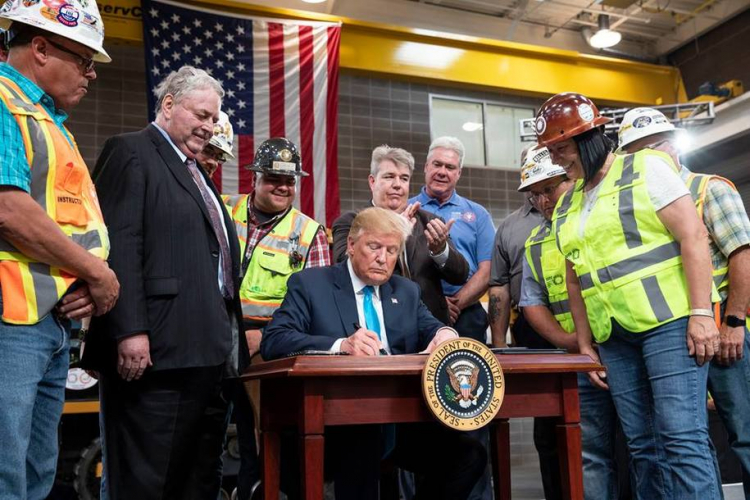 The first order, the “Executive Order on Promoting Energy Infrastructure and Economic Growth,” requires the Department of Transportation to change its policies so liquified natural gas can be shipped by rail and tanker truck. It also "seeks to limit shareholder ballot initiatives designed to alter companies' policies on environmental and social issues," The Washington Post reports.

The second order, the “Order on the Issuance of Permits with Respect to Facilities and Land Transportation Crossings at the International Boundaries of the United States,” states that the president is the only person responsible for approving or rejecting pipelines and other infrastructure that cross international boundaries. This responsibility previously fell on the Secretary of State.

The two orders, signed at a press conference by Trump in Crosby, Texas, will make it easier for corporations to construct oil and gas pipelines.

Bernhardt is now under fire regarding the conflicts between his work as a lobbyist and lawyer for the powerful Westlands Water District and now as a top official in the Trump administration. On April 5, Natural Resources Committee Chair Raúl M. Grijalva (D-Ariz.) and Water, Oceans, & Wildlife Subcommittee Chair Rep. Jared Huffman (D-San Rafael) launched a new probe seeking documents associated with Bernhardt and the water district, a former client of Bernhardt’s. More information: http://www.dailykos.com/...

“IPAA consistently has supported development of much needed infrastructure to transport America’s oil and natural gas resources to consumers,” said IPAA Executive Vice President Lee Fuller in a statement. “Therefore, it supports the efforts of President Trump in issuing his Executive Orders (EO) to encourage this development. In particular, IPAA supports the aspect of the EO that calls on EPA to update the interim 2010 guidance over permitting under Section 401 of the Clean Water Act (CWA).

Washington Governor Jay Inslee and Attorney General Bob Ferguson released a statement blasting Trump’s “executive order curtailing states' legal authority under Section 401 of the Clean Water Act,” calling the action “an unprecedented assault on the right and obligation of every state to protect their waters and their communities.”

“No amount of politicking will change the facts — states have full authority under the Clean Water Act to protect our waters and ensure the health and safety of our people. Washington will not allow this or any presidential administration to block us from exercising our authority lawfully and effectively,” Insleet and Ferguson stated.

“We stand with governors and attorneys general across the country in opposing this dangerous attack on our environment and our families’ right to clean water. We intend to challenge any attempt by the administration to illegally constrain Washington’s authority to protect our state’s natural resources,” they vowed.

David Turnbull, Strategic Campaigns Director with Oil Change U.S., also slammed the signing of the two orders, comparing the orders to taking a “jackhammer” to the Clean Water Act and the National Environmental Policy Act:

“Today, President Trump has taken a jackhammer to two of our bedrock environmental laws, the Clean Water Act and the National Environmental Policy Act, all in service to the oil and gas industry. In trampling on these foundational policies, Trump is doubling down on climate disaster, seeking to ram through new fossil fuel infrastructure that our society simply can’t afford. The United States is poised for a massive expansion of out-of-control oil and gas production in the coming years that will make it nearly impossible to avoid climate catastrophe if left unchecked, and Trump’s executive orders today move us in exactly the wrong direction.

“President Trump continues to have oil in his eyes, obscuring the ever-worsening crisis around us. Fortunately, the American people have woken up to this disaster in the making and are standing up for our communities and our climate. While Trump stands with Big Oil executives raking in billions of public dollars in subsidies each year, we proudly stand with frontline communities and the pipeline fighters and water protectors who are standing up every day for all of us. The fight continues.”

”It’s no accident that Trump made this announcement in front of union workers,” the Sunrise movement said in a statement. “This is a thinly veiled attempt by Trump and his fossil fuel billionaire friends to pit working people against each other."

In addition to the two latest executive orders, on March 29, Trump issued a revised Executive Order approving TransCanada's Keystone XL pipeline project. Native American and environmental groups said the revised order is an attempt by the President to bypass federal environmental laws that apply to federal agencies, including the National Environmental Policy Act, the Administrative Procedure Act and the Endangered Species Act.

“This is clearly an attack on environmental law procedure and violates the right to free, prior, and informed consent from the tribal nations that call the ‘Medicine line’ (the US-Canadian border) traditional and ancestral home territory,” said Dallas Goldtooth of the Indigenous Environmental Network. “Two federal courts have already agreed with us that any action by the president to ram this dirty tar sands pipeline thru is premature and unlawful. In defense of the sacred and the protection of Indigenous peoples, we will continue to fight this pipeline, even if that means further legal action against the office of the President of the United States.”

"The Keystone XL Pipeline would pose grave risks to the environment, including the climate, cultural resources, water resources, fish and wildlife, and human health and safety,” according to a press release by IEN, NCRA and Attorney for IEN and NCRA, Stephan Volker.
Add Your Comments
Support Independent Media