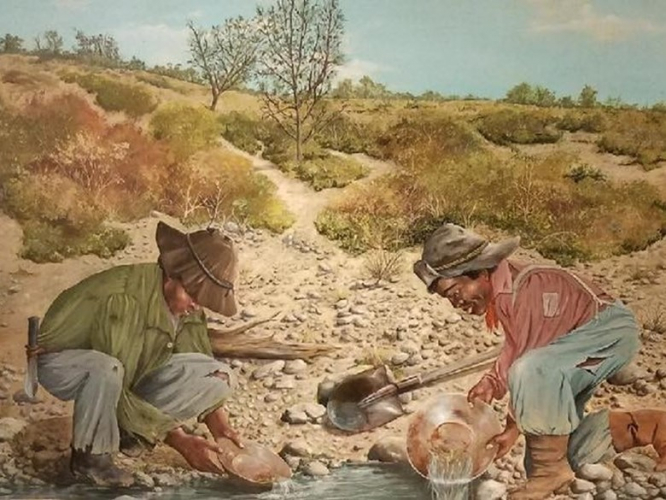 original image (780x585)
This black gold ain’t Texas tea, Juneteenth is a date when African-Americans celebrate the journey toward freedom. One local celebration aims to bring Gold Rush-era history back to life

Here in Mother Lode country, for a man named Joe Louis Moore, the phrase “black gold” does not mean oil. Moore, a retired Bay Area photographer with an inescapable interest in history, moved to Sacramento three years ago. “I started reading about blacks in the Gold Rush and wanted to find out where all this stuff was taking place,” he says.

What he uncovered was more like a storybook mother lode of the lives of African-American miners and the many communities they established beginning in the 1840s. Moore’s detailed map of black mining sites rapidly grew from seven to 60, nearly 10 times what the history books and museums would have you believe. Soon the State and National Park Services came knocking. “They asked if they could publish my map,” Moore says, smiling. And now the map led to the real treasure in Moore’s vision—groundswell support for a permanent interpretive center focused on African-American history in Negro Bar State Park in Folsom.

The third-annual flagship event that raises awareness, community support and funds is this Saturday, June 15, a day many citizens will gather to celebrate a particularly American event about the demise of “the peculiar institution.” Juneteenth is the oldest known celebration of the ending of slavery in the United States. From its Galveston, Texas, origin on June 19, 1865, the observance of this date as the African-American Emancipation Day has spread in recent years, even beyond U.S. borders.

Moore, the executive director and president of the Sacramento African-American Historical and Cultural Society, and his wife, Dr. Shirley Ann Wilson Moore, Professor of History at California State University Sacramento, are helming the event “Reclaiming the Past: African-Americans Along the American River.” This free, all-day (9:30 a.m. to 4:30 p.m.) family picnic and educational Chautauqua, complete with music, art, dance, children’s games, wagon rides and a re-enacted encampment of not only the black gold miners but also the legendary Buffalo Soldiers, is both down-home in its outdoor setting at the Negro Bar State Park, and warmly ambitious in its clarion call—that is, to peel away to the layers of largely untaught truths in schoolrooms, history books and museums by revealing the importance of African-Americans to the development of Sacramento and California. The Moores welcome all people of all races to the event.

“The point is to make a day where families can meet their neighbors and have fun, but also begin to talk about the really incredible history of this area,” says Dr. Moore. “People are interested in history, not just in the abstract. Instead, we really want to make personal connections with the past, and Juneteenth is a way for African-American people, especially, to make those very personal connec tions.” Notably, the “Reclaiming the Past” project was selected last year by the National Park Service to be part of its “Underground Railroad Network to Freedom Project,” only one of two such programs honored in the West.

The larger, three-to-five-year project that the Juneteenth celebration spotlights is the creation of the permanent William Alexander Leidesdorff Interpretive Center, which will be housed in a reconstructed adobe building. According to the not-for-profit group’s mandate, it will acquaint visitors to broad historical themes important to California, including the region’s multicultural heritage, slavery, the abolitionist movement, the Underground Railroad and race relations. ‘We’re looking at the whole history of African-Americans from Sacramento up to Coloma along the American River during the Gold Rush period,” says Mr. Moore.

Moore is working with both the State and National Park Service to create the center at Folsom, which was originally called Negro Bar. That was the site where African-American miners first panned for gold in the 1840s and ‘50s. Later, the name was changed to Folsom. The State Park Service built Negro Bar State Park directly across the river from Folsom, in memory of the African-Americans who were there first.

‘Most people do wonder what that name means because there is no historical background marker yet to explain it,” Dr. Moore notes. It’s more than uncomfortable to note that the original name of the area is the racial epithet white claim jumpers tagged to the community.

The Saturday morning ceremony begins at 9:30 a.m. with a local student reading President Abraham Lincoln’s Emancipation Proclamation, which was delivered to the slaves and slave owners of Texas by Major General Gordon Granger a full two-and-a-half years after the Proclamation had become official on January 1, 1863. Historical speculation still abounds on reasons for the delay.

To make area history come alive for this visual MTV generation, two nationally noted scholar-performers commissioned by the California Council for the Humanities to present their characters in 1840s garb and voice will appear. Rhonnie Washington, Professor of Drama at San Francisco State University, will portray William Alexander Leidesdorff, a dramatic leading figure in California history. He came to San Francisco in the early 1840s from the Virgin Islands by way of New Orleans, a successful cotton entrepreneur and politician who became U.S. Vice Counsel General to Mexico and owned large portions of downtown San Francisco. He built the first hotel there, sailed the first steamship in the Bay and hosted most all the elegant parties of the day.

“The Mexican government gave him 35,000 acres of land up here along the American River,” Mr. Moore notes. “From Bradshaw Road up to Folsom was actually his land grant.” Leidesdorff died single at age 38, only months before gold was found in 1849; he never participated in the vast wealth that would have been his. Unfortunately, neither did his relatives, according to Moore. “He missed the Gold Rush boom. If he had lived, he would have been by far the wealthiest man in California.”

Joseph Libby Folsom, the town’s namesake, quickly traveled to the West Indies to purchase the massive land holdings from Leidesdorff’s aging mother, and from that point there ensued one of the longest legal battles in California history—even President Lincoln intervened. After the William Alexander Liedesdorff Interpretive Center is completed, Moore wants to create a historic court of review of the Liedesdorff case.

Between performances, the Moores have planned a continuous Black Gold Camp Interpretive Encampment that will include Gold Rush documents, mining claims, photographs and artifacts from Negro Bar, Negro Hill, Massachusetts Flat, Negro Flat and Little Negro Hill, all sites that were partially or entirely destroyed by the flooding of the American River Canyon when Folsom and Nimbus Dams were built in 1957, and by the development of the area around Lake Natoma.

“We will be recreating the gold-mining community—with miner’s tents and all of the artifacts, so people can really get a feeling of Negro Bar and what the gold fields looked like,” says Dr. Moore. “People will actually be able to pan for gold at these sites where the first African-Americans panned over 150 years ago.”

Circling the celebration campsite, along with the Buffalo Soldiers, will be a stagecoach provided by the Wells Fargo Foundation. “This is the 150th Anniversary of the Pony Express, specifically the Sacramento branch, which opened on July 13, 1852,” recounts Stacy Smithers, senior vice president of sales and marketing for the Wells Fargo Foundation. “One of our most famous stagecoach drivers was an African-American named George Monroe, son of an early black gold miner. He came from Georgia and settled in Mariposa in the 1850s. We’re hoping to get a stagecoach on site.” History later reveals that in 1879, Monroe was chosen to drive President U.S. Grant along the treacherous “S” curves of the Wanona Trail into Yosemite Valley. His fame as a driver led to Monroe Meadows in Yosemite being named for him.

The afternoon Chautauqua performance is by Susheel Bibbs, a UC Berkeley professor and one of the leading authors on the life and times of Mary Ellis Pleasant, who was a pioneer in California Abolitionist Movement and known as the “Mother of Civil Rights” in California. A leading figure in the western Underground Railroad, Pleasant helped many slaves make their way to freedom. “She was based in San Francisco, but certainly was an important figure in some of the most outstanding fugitive slave cases centered in the Sacramento region,” notes Dr. Moore. Pleasant challenged California’s Jim Crow laws. She was instrumental in the passing of a legislative act in 1863, giving blacks the right of testimony in court. In 1868, a full 83 years before Rosa Parks refused to give up her seat at the front of the bus to a white passenger in Montgomery, Alabama, Pleasant successfully sued the city after she was kicked off a streetcar for being black. And it was Pleasant who allegedly donated $30,000 of her millions to John Brown to help fund his raid on Harper’s Ferry.

In keeping with tradition, there will be room for another American institution: free speech. A “soapbox” open mike is provided to the general audience to give one-minute speeches, poetry, songs, music or other oratory. Mr. Moore’s vision is inclusive: “Most people here know that California was admitted into the Union as a free state,” he says, “and they assume that there was no slavery here—that the issue of slavery and race relations was not important to people here. Not so. Negro Bar and other mining communities turned out to be real havens for the miners of color who had no legal rights in California, so claim jumping of non-whites was very common. People of color were victimized because they had no legal standing, and in many instances, you had Mexicans, Chileans, Chinese, Indians and black Americans grouped together for protection—so this was a mutually beneficial living arrangement as well.

“In this ‘Reclaiming’ project,” he continues, “there is focus on other people of color, because you can’t tell the story of African-Americans without telling the story of other people of color. Black people didn’t live and grow in a vacuum! We are beneficiaries of that diversity here today. That is nothing new—that has been the description of California from its inception.”

It might be a real boon to see a local personality noted for his dedication to African-American history speak at this event. “No, we’ve not contacted Chris Webber at this point, though many have suggested it,” Mr. Moore says, smiling. “I’m sure he is constantly bombarded with people asking him to do things for them. At some point though, we’d love for him to be involved with this project.”

Chris, bring a picnic lunch and consider yourself invited.