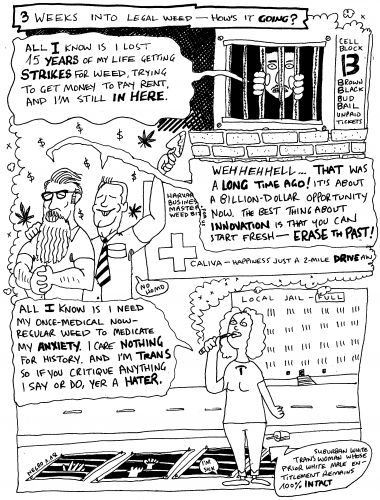 original image (2382x3134)
San José writer Eugenio Negro critiques the corporatization of legal marijuana, leadership of which industry is indicated in the movement to finally achieve legalization. Negro sheds light on ongoing neglect of incarcerated people of color whose bodies fueled the "war on drugs" that struck largely against smalltime marijuana possession while failing ever to stem movement of life-threatening substances through organized crime channels. He contrasts this condition with the attitudes of consumers and capitalists eager to reframe marijuana's reputation in order to consolidate wealth. Because it's Eugenio Negro, he finds a complicit group for whom liberal people otherwise are often eager to show compassion, and knocks that group down a peg while he's at it.
https://negrocomics.wordpress.com/2018/01/...
Add Your Comments
Support Independent Media
We are 100% volunteer and depend on your participation to sustain our efforts!