Add an Event
Newswire
Calendar
Features
Home
Donate
From the Open-Publishing Calendar
From the Open-Publishing Newswire
Indybay Feature
Publish to Newswire
Add an Event
Related Categories: San Francisco | Anti-War
No New War on Korea Rally in San Francisco
by R. Robertson
Wednesday Aug 16th, 2017 12:45 AM
President Trump has threatened the Democratic People’s Republic of Korea (North Korea) with “fire and fury like the world has never seen” – a new nuclear war aimed at annihilating the DPRK. At a rally at Powell and Market in San Francisco demonstrators chanted, "North and South are ONE Korea" to the drumming of Ieumsae (이음새), a Korean pungmul (풍물) group based in Oakland that drums to support social justice causes.

This week speakers at a rally against US imperialism called for the halting of US/South Korea military exercises along the Korean peninsula. The annual war games are scheduled to be held next week. The Democratic People's Republic of Korea (DPRK/North Korea) views these acts of aggression as acts of war.

[ Video of Ieumsae drumming posted below. ] 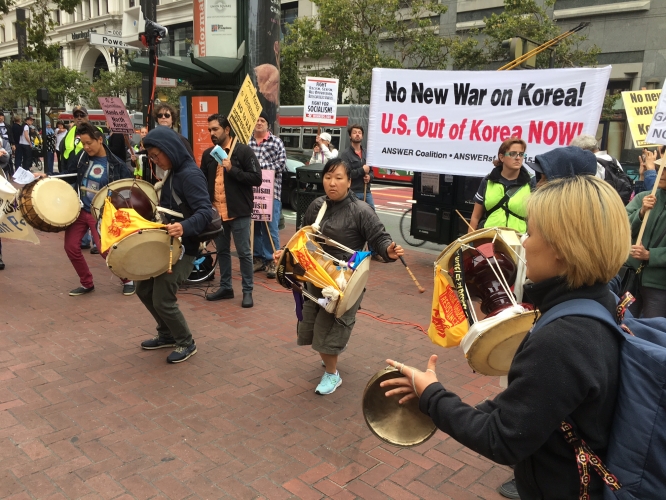 President Trump has threatened the Democratic People’s Republic of Korea (North Korea) with “fire and fury like the world has never seen” – a new nuclear war aimed at annihilating the DPRK. At a rally at Powell and Market in San Francisco this week demonstrators chanted, "North and South is ONE Korea" and called for an end to US military provocation in North East Asia.

One of the speakers at the rally, Paul Liem of HOBAK (Hella Organized Bay Area Koreans), promoted an agreement called “freeze for freeze”. In this scenario the United States and South Korea would reduce the military threat to the North by ceasing the annual war games that are scheduled to be held next week. In exchange for that, the North would agree to freeze its missile and nuclear program. Christine Hong, Associate Professor specializing in critical Pacific Rim studies at UC Santa Cruz, said that because there was never a signed peace treaty at the end of the Korean War in 1953, the US/South Korea military exercises are an act of war in the eyes of the DPRK. She said the United States should negotiate in good faith with North Korea, South Korea and China to replace the 1953 Armistice Agreement with a peace agreement, and finally end the Korean War.

Other speakers demanded that the US fully respect the sovereignty and territorial integrity of North Korea and criticized the presence of more than 28,000 US troops in South Korea.
§Banner shows Korean peninsula shown as one country /Paul Liem at left
by R. Robertson Wednesday Aug 16th, 2017 12:45 AM 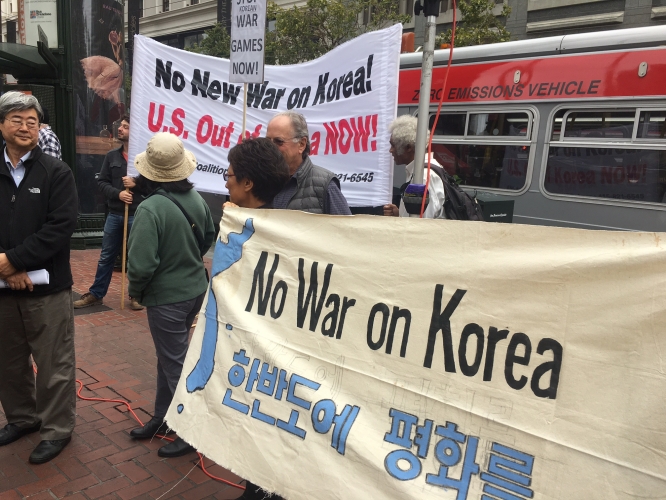 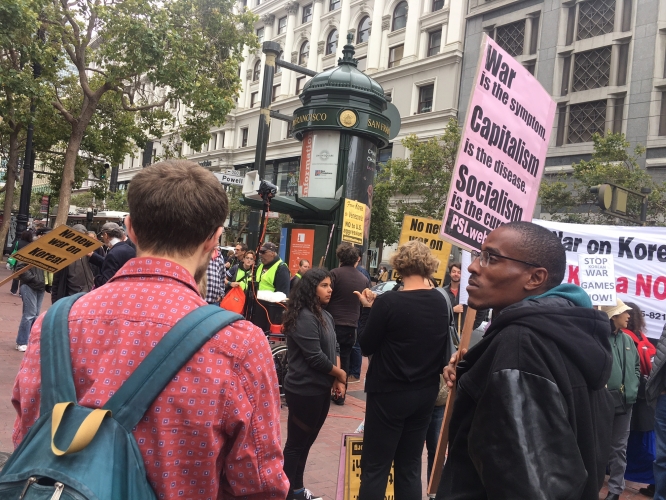 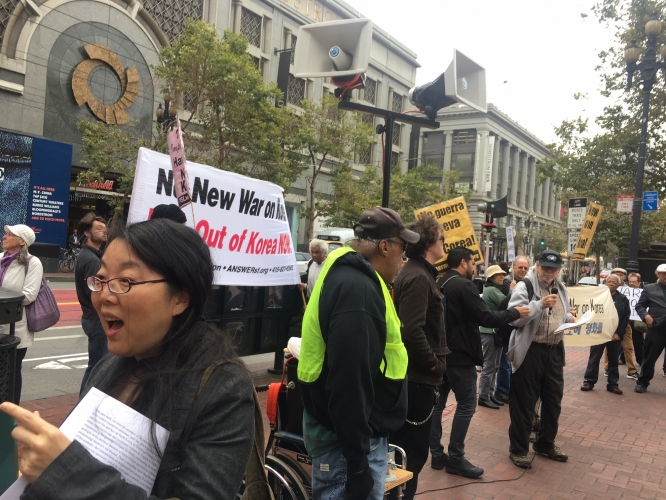 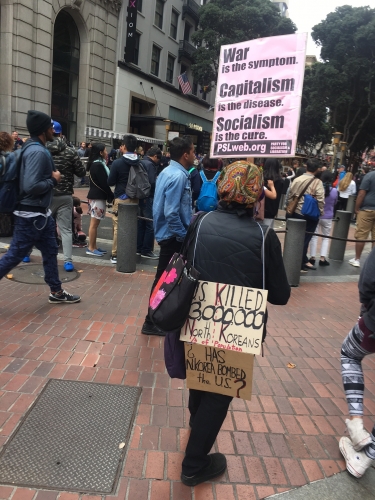 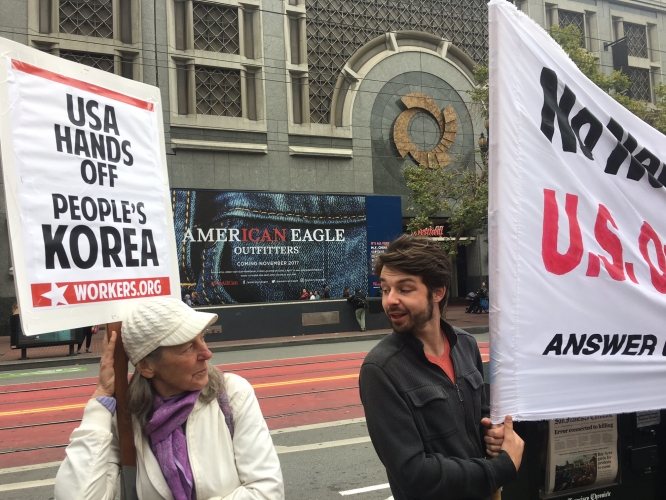 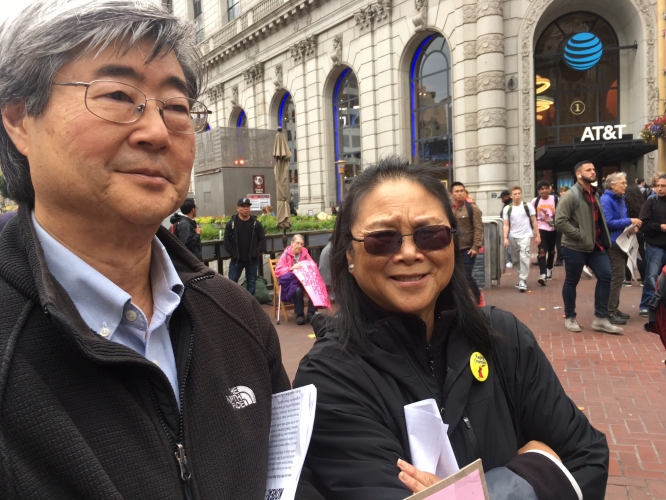 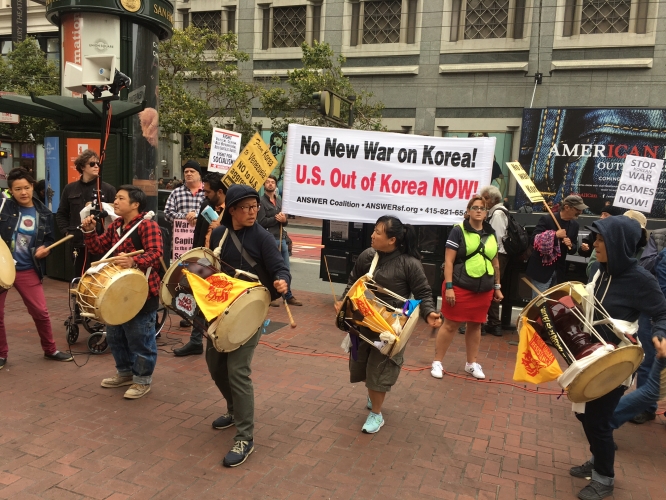 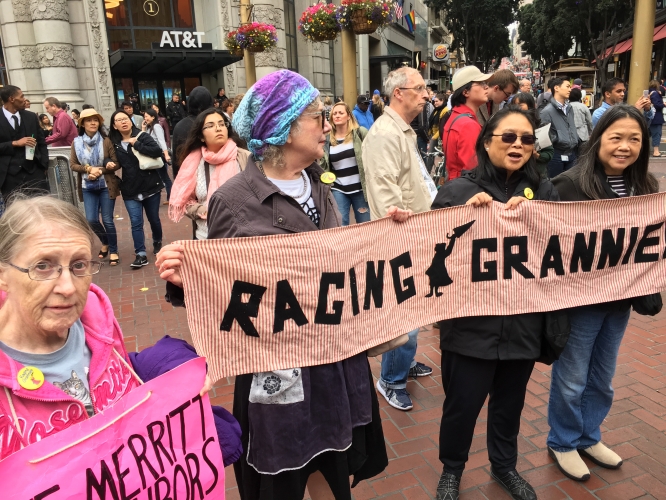 original image (4032x3024)
These Raging Grannies came from SF, the Peninsula and the East Bay
§Chanting and drumming
by R. Robertson Wednesday Aug 16th, 2017 12:45 AM
Copy the code below to embed this movie into a web page:
Download Video (2.1MB) | Embed Video
Ieumsae (이음새) drumming 0:20
Add Your Comments