by via Animal Welfare Institute
Washington, DC, December 10, 2015 —The Animal Welfare Institute (AWI) notified the US Fish and Wildlife Service (USFWS) today of its intent to sue the agency for failing to make a timely 12-month finding, as required by the Endangered Species Act (ESA), on whether to list the pygmy three-toed sloth (Bradypus pygmaeus) as endangered. 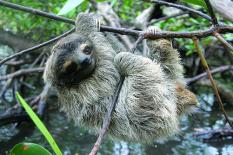 AWI filed an emergency petition in November 2013 with the USFWS to list the species, the world’s smallest sloth. At that time, only 79 individuals were believed to remain in the wild, all on Island Escudo de Veraguas, an island off the coast of Panama. Threats to the species include habitat destruction and degradation, hunting for food, collection for trade, and the loss of genetic diversity.

In June 2014, the USFWS made a positive 90-day finding with respect to AWI’s emergency petition, indicating that protection for the pygmy sloth under the ESA may be warranted. However, to date, the agency has not made the statutorily required 12-month finding and has advised AWI that it is not likely to do so until fiscal year 2017, at the earliest.

“It’s unfathomable that the USFWS needs four years to make a 12-month finding on this very clearly imperiled species,” said Tara Zuardo, AWI wildlife attorney. “We have provided the agency with all of the relevant scientific evidence that it needs to make a decision in a timely manner. The continued lack of action is likely to result in a further decline in the pygmy sloth population and an increased risk of extinction for the species.”

Listing the sloth under the ESA would help prevent imports of the animal into the United States. In September 2013, the Dallas World Aquarium captured at least eight pygmy sloths with the intent of exporting six to its facility in Texas and providing two animals to a zoo in Panama. This attempted removal of 10 percent of the known remaining population of pygmy sloths was thwarted at the last minute by concerned citizens, animal advocates, and local authorities. At least two of the eight sloths may have died before or immediately after their re-release, potentially as a result of their capture and confinement.

Click here to view the Notice of Intent:
http://awionline.org/sites/default/files/uploads/documents/AWI-WL-PygmySloth-NOI-12102015.pdf

Animal Welfare Institute
https://awionline.org/
Add Your Comments
Support Independent Media
We are 100% volunteer and depend on your participation to sustain our efforts!