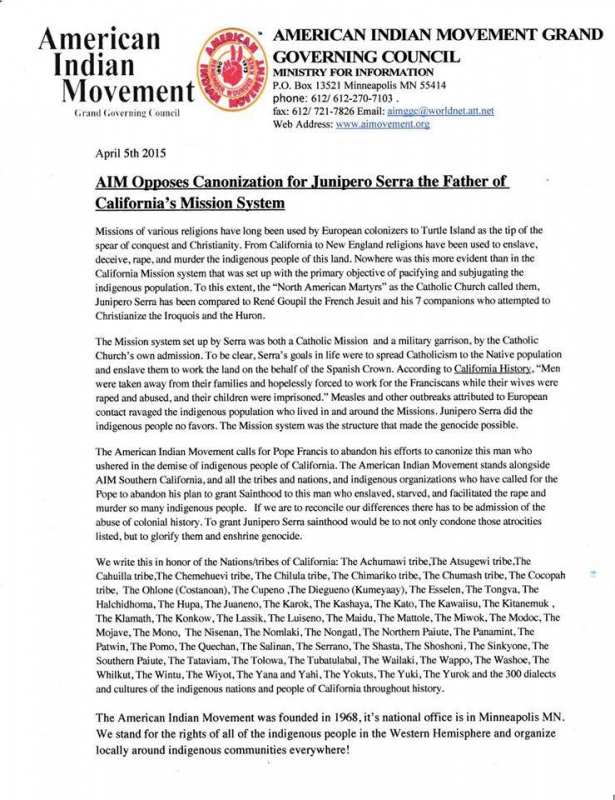 
Missions of various religions have long been used by European colonizers to Turtle Island as the tip of the spear of conquest and Christianity. From California to New England religions have been used to enslave, deceive, rape, and murder the indigenous people of this land. Nowhere was this more evident than in the California Mission system that was set up with the primary objective of pacifying and subjugating the indigenous population. To this extent, the “North American Martyrs” as the Catholic Church called them, Junipero Serra has been compared to René Goupil the French Jesuit and his 7 companions who attempted to Christianize the Iroquois and the Huron.

The Mission system set up by Serra was both a Catholic Mission and a military garrison, by the Catholic Church’s own admission. To be clear, Serra’s goals in life were to spread Catholicism to the Native population and enslave them to work the land on the behalf of the Spanish Crown. According to California History, “Men were taken away from their families and hopelessly forced to work for the Franciscans while their wives were raped and abused, and their children were imprisoned.” Measles and other outbreaks attributed to European contact ravaged the indigenous population who lived in and around the Missions. Junipero Serra did the indigenous people no favors. The Mission system was the structure that made the genocide possible.

The American Indian Movement calls for Pope Francis to abandon his efforts to canonize this man who ushered in the demise of indigenous people of California.

The American Indian Movement stands alongside AIM Southern California, and all the tribes and nations, and indigenous organizations who have called for the Pope to abandon his plan to grant Sainthood to this man who enslaved, starved, and facilitated the rape and murder so many indigenous people. If we are to reconcile our differences there has to be admission of the abuse of colonial history. To grant Junipero Serra sainthood would be to not only condone those atrocities listed, but to glorify them and enshrine genocide.

We write this in honor of the Nations/tribes of California: The Achumawi tribe,The Atsugewi tribe,The Cahuilla tribe,The Chemehuevi tribe, The Chilula tribe, The Chimariko tribe, The Chumash tribe, The Cocopah tribe, The Ohlone (Costanoan), The Cupeno ,The Diegueno (Kumeyaay), The Esselen, The Tongva, The Halchidhoma, The Hupa, The Juaneno, The Karok, The Kashaya, The Kato, The Kawaiisu, The Kitanemuk , The Klamath, The Konkow, The Lassik, The Luiseno, The Maidu, The Mattole, The Miwok, The Modoc, The Mojave, The Mono, The Nisenan, The Nomlaki, The Nongatl, The Northern Paiute, The Panamint, The Patwin, The Pomo, The Quechan, The Salinan, The Serrano, The Shasta, The Shoshoni, The Sinkyone, The Southern Paiute, The Tataviam, The Tolowa, The Tubatulabal, The Wailaki, The Wappo, The Washoe, The Whilkut, The Wintu, The Wiyot, The Yana and Yahi, The Yokuts, The Yuki, The Yurok and the 300 dialects and cultures of the indigenous nations and people of California throughout history.

The American Indian Movement was founded in 1968, it’s national office is in Minneapolis MN. We stand for the rights of all of the indigenous people in the Western Hemisphere and organize locally around indigenous communities everywhere!

American Indian Movement
http://aimovement.org/
Add Your Comments
Support Independent Media
We are 100% volunteer and depend on your participation to sustain our efforts!