by Dan Bacher
The Western States Petroleum Association spent a record $4 million in the last three months alone, more than twice historical levels. WSPA has spent more than $7 million so far in 2014, leading all statewide lobbying by a wide margin. The group paid nearly $2.5 million to KP Public Affairs, the state’s highest paid lobbying firm, in 2013-2014. 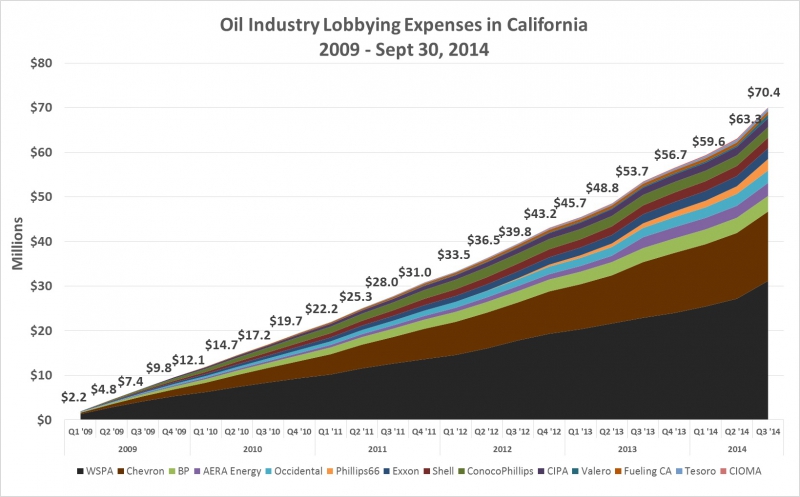 You will rarely see the biggest, most explosive story in California environmental politics covered in either the mainstream media or most so-called "alternative" media.

This giant environmental scandal is the dramatically increasing power of the Western States Petroleum Association (WSPA) and the oil industry in California - and how corporate "environmentalists" and state officials helped facilitate the oil industry's domination of California's politics by greenwashing the key leadership role that the WSPA president played in the creation of fake "marine protected areas" from 2004 through 2012.

The oil industry has spent over $70 million on lobbyists in California since 2009, including record amounts of money spent during the third quarter of 2014, according to a new report written by Will Barrett, the Senior Policy Analyst for the American Lung Association in California.

From July 1 to September 30 alone, the oil industry spent an unprecedented $7.1 million lobbying elected officials "with a major focus on getting oil companies out of a major clean air regulation," said Barrett.

And this doesn’t include spending on ballot measures or the recent election, including Chevron spending $3 million (unsuccessfully) to elect “their” candidates to the Richmond City Council. Big Oil also dumped $7.6 million into defeating a measure calling for a fracking ban in Santa Barbara County and nearly $2 million into an unsuccessful campaign to defeat a measure banning fracking and other extreme oil extraction techniques in San Benito County.

The report documented record money spent on lobbying by the oil industry through the first 9 months of 2014. Big Oil has spent $13.6 million lobbying elected officials so far this year:
• This surpassed the prior record ($13.5 million) seen in all of 2013.
• The industry spent $1.5 million per month lobbying in 2014.
• Oil interests represented 17 percent of all lobbying in California last quarter.

The report also revealed huge increases in July-September 2014 compared to previous quarters. Big Oil made significant increases in spending in 2014 as the legislative session came to a close and as the industry intensified its anti-AB 32 campaign, as well as successfully lobbying to defeat a bill that would protect a "marine protected area" created under the Marine Life Protection Act (MLPA) Initiative from offshore oil drilling.

The Western States Petroleum Association spent a record $4 million in the last three months alone, more than twice historical levels. WSPA has spent more than $7 million so far in 2014, leading all statewide lobbying by a wide margin. The group paid nearly $2.5 million to KP Public Affairs, the state’s highest paid lobbying firm, in 2013-2014.

The report also revealed that:
• Eight oil interests spent their most ever lobbying in California
• Four broke annual spending records in just 9 months.
• Phillips66 (4), Chevron (6) and Valero (9) are also all among the top ten lobbying spenders from July-Sept 2014.
• Phillips66 spent $880,000, 4 times over its recent average
• Valero spent $542,000 in 3 months - more than the prior 42 months combined.

However, the millions the oil industry has spent on lobbying and campaign contributions are mere chump change to Big Oil. The five big oil companies - BP, Chevron, Conoco-Phillips, Exxon Mobil and Shell - made a combined total of $93 billion in profits last year. Big Oil's estimated profits in 2014 to date are over $84,500,000. (http://www.stopfoolingca.org/)

To read the complete report, go to: http://www.lung.org/associations/states/california/advocacy/climate-change/oil-industy-lobbying-report.pdf

Of course, oil industry representatives don't exert their enormous influence over California politics only by spending millions on lobbying and political campaigns, but also by sitting on state and federal regulatory panels.

In one of the biggest conflicts of interest in recent California history, Catherine Reheis-Boyd, President of the Western States Petroleum Association (WSPA) and leader of the campaign to expand offshore oil drilling and fracking in California, chaired the Marine Life Protection Act (MLPA) Initiative Blue Ribbon Task Force to create fake "marine protected areas" on the South Coast. She also "served" on the task forces to create the alleged "marine protected areas" on the Central Coast, North Central Coast and North Coast.

The MLPA Initiative, funded by the Resources Legacy Fund Foundation, created so-called "marine protected areas" that fail to protect the ocean from fracking, oil drilling, pollution, military testing, corporate aquaculture and all human impacts on the ocean other than fishing and Tribal gathering. These "marine protected areas" are good for Big Oil, polluters and corporate interests - and bad for sustainable fishermen, tribal gatherers and the public trust.

In addition to her "service" on the MLPA Initiative panels, Reheis-Boyd also sits on the Marine Protected Areas (MPA) Federal Advisory Committee. (http://www.counterpunch.org/2014/03/28/big-oil-lobbyist-serves-on-federal-marine-protected-areas-panel/ )

While grassroots environmentalists, Tribal leaders, fishermen and advocates of democracy and transparency in government strongly opposed Reheis-Boyd's strange role as a "marine guardian," state officials, corporate "environmental" NGO representatives and MLPA advocates continually praised the process that Reheis-Boyd oversaw as "open, transparent and inclusive" when it was anything but.

“How can this continue to be overlooked and allowed? Where is the public on these things? When will the public refuse to accept this outright WRONG? The Mega Corporations have loop holes to provide funding and personnel to government to run their billion dollar destructive projects through. It is so sad the public has no recourse because they are held hostage and want the two bit jobs!”

Along with serving on state and federal regulatory panels, the oil industry has set up a network of Astroturf groups in California, Oregon and Washington to eviscerate environmental laws and fight campaigns to stop fracking, acidizing and other extreme oil extraction methods. (http://nwnewsnetwork.org/post/oil-interests-fund-astroturf-groups-washington-oregon)

According to Austin Jenkins of Nation Public Radio (NPR), a leaked Power Point slide shows the campaigns and coalitions that the Western States Petroleum Association has "activated" to combat what it calls "aggressive anti-oil initiatives in the West."

"A document obtained by public radio shows the oil industry is at the center of more than a dozen Astroturf groups in Washington, Oregon and California," said Jenkins. "At the center of the effort is the Western States Petroleum Association in Sacramento. An internal PowerPoint slide shows WSPA has 'activated' -- its word -- several “campaigns and coalitions” to respond to “aggressive anti-oil initiatives in the west.”

Whether it's through spending millions on lobbying and political campaigns, serving on state and federal regulatory and advisory panels or setting up Astroturf groups, the oil industry is embarked on an unprecedented campaign to weaken environmental laws and expand fracking and other extreme oil extraction methods in the West. And those who empowered the oil industry by greenwashing the role that a big oil lobbyist played in the creation of so-called "marine protected areas" in California need to be exposed for the collaborators that they are.
Add Your Comments
Support Independent Media
We are 100% volunteer and depend on your participation to sustain our efforts!