Add an Event
Newswire
Calendar
Features
Home
Donate
From the Open-Publishing Calendar
From the Open-Publishing Newswire
Indybay Feature
Publish to Newswire
Add an Event
Related Categories: Palestine | International
Defend Human Rights! Boycott Dasani!
by Boycott for Peace
Saturday Oct 25th, 2014 6:02 PM
Dasani profits from selling drought stricken Californian tap water, while contributing to the dire and on-going water crisis in Palestine. Here you will find everything you need to educate yourself and others about the on-going issues, including an educational meme you can share, blog, tweet, and pin. 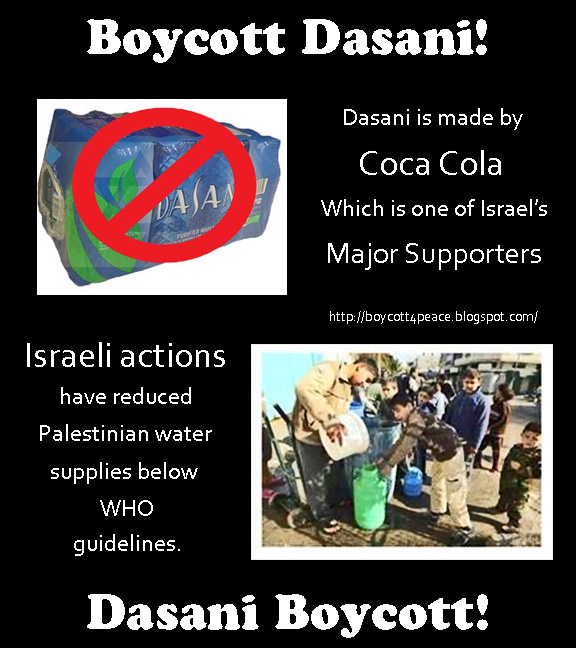 Access to adequate safe, clean water is a human right. A human right that Israel denies the Palestinian people.

There are many other reasons to boycott Coca Cola brands, some are listed here:
http://en.wikipedia.org/wiki/Criticism_of_Coca-Cola

Scroll down here for a list of Coca Cola products and brands:
http://freepalproject.wordpress.com/boycott-list/

Coca Cola’s impact in the illegally occupied territories and its support of Israel contributes to many Palestinian water issues:

“An estimated 1.2 million Palestinians in Gaza still have no running water. In addition, insufficient electricity supplies bar them from treating or pumping sewage, causing a risk of pandemic diseases such as cholera or typhoid.”
http://www.jpost.com/Arab-Israeli-Conflict/Cross-border-environmental-group-urges-Israel-to-increase-water-supply-to-Gaza-378489

Israel has a long history of depriving Palestinians adequate access to water:
http://en.wikipedia.org/wiki/Water_supply_and_sanitation_in_the_Palestinian_territories

http://boycott4peace.blogspot.com/2014/10/...
Add Your Comments
Support Independent Media
We are 100% volunteer and depend on your participation to sustain our efforts!