Add an Event
Newswire
Calendar
Features
Home
Donate
From the Open-Publishing Calendar
From the Open-Publishing Newswire
Indybay Feature
Publish to Newswire
Add an Event
Related Categories: California | Central Valley | Environment & Forest Defense | Government & Elections
The water bond: A classic David and Goliath battle in California politics
by Dan Bacher
Thursday Oct 9th, 2014 4:45 PM
Governor Jerry Brown’s Proposition 1 and 2 campaign has raised $6,621,946 and has spent $817,276, while the No on Proposition 1 campaign has raised a total of $71,000 and has spent $41,036 as of October 6, 2014, 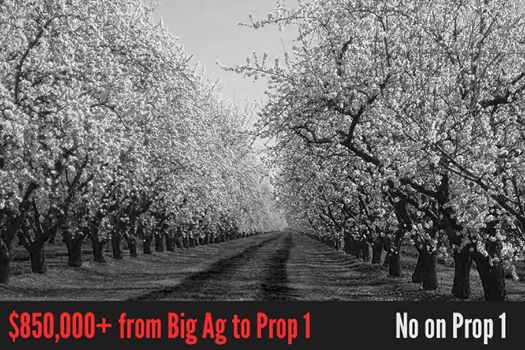 The water bond: A classic David and Goliath battle in California politics

The campaign for and against Proposition 1, the $7.5 billion water bond on the November 4 ballot, has emerged as the classic David and Goliath battle of this election season in California.

Two committees are providing the vast majority of funding for the Yes on Proposition 1 campaign. The Yes on Props 1 and 2 committee, "A Bipartisan Coalition of Business, Labor, Republicans, Democrats and Governor," has raised $4,540,580 and has spent $759,649. The second committee, the California Business Political Action Committee, sponsored by the California Chamber of Commerce, has raised $62,500 and has spent $57,627.

The top donor in the Yes on Prop. 1 campaign is Sean Parker, an entrepreneur and venture capitalist who cofounded the file-sharing computer service Napster and served as the first president of the social networking website Facebook. He also cofounded Plaxo, Causes, and Airtime. As of September, 2014, Parker's net worth was estimated to be $3.1 billion, according to Wiikipedia. He has contributed $1 million to the Yes campaign to date.

Also noteworthy is that four members of the family that owns the Gap Stores - Doris F. Fisher, John J. Fisher, Robert J. Fisher, and William S. Fisher - each contributed $245,000 to the campaign.

Corporate agribusiness interests have donated a total of $850,000 to the Yes on Prop. 1 campaign. Stewart Resnick, the Beverly Hills agribusiness tycoon, owner of Paramount Farms and largest orchard fruit grower in the world, contributed $150,000. The California Farm Bureau Federation contributed $250,000, the Western Growers Service Association donated $250,000 and the California Cotton Alliance contributed $200,000 to the Yes on Prop. 1 campaign.

Resnick and his wife, Lynda, have been instrumental in promoting campaigns to eviscerate Endangered Species Act protections for Central Valley Chinook salmon and Delta smelt populations and to build the fish-killing peripheral tunnels - and have made millions off resellling environmental water to the public. Prop. 1 opponents recently held a "mock reception" outside the Resnick mansion in Beverly Hills to expose the Resnicks, who stand to benefit from the two dams funded by the latest state water bond. (http://www.indybay.org/newsitems/2014/09/28/18762178.php)

Opponents of Proposition 1 criticized Governor Jerry Brown and the backers of Prop. 1 for taking $850,000 in contributions to date from big agribusiness donors to pass public funding for water transfers to enrich them - and to enable the biggest dam-building program in California history.

Adam Scow from Food and Water Watch said, “Corporate agribusiness giants, including Stewart Resnick, are spending big to pass Proposition 1, a bloated $7.5 billion bond measure that would funnel more water to big agribusinesses at taxpayer expense. Prop 1 is a measure to quench their greed—it will not solve California’s water problems."

He also noted that the Western Growers Association, the California Farm Bureau Federation, and the California Cotton Alliance have contributed a total of $700,000 to the Prop. 1 campaign to ensure the construction of Sites Reservoir on the west side of the Sacramento Valley and Temperance Flat Dam on the San Joaquin River.

“Proposition 1 burdens taxpayers with debt to build projects for billion-dollar farming conglomerates that make up groups like Western Growers and the California Cotton Alliance," said Barbara Barrigan-Parrilla of Restore the Delta, who is the No on Prop. 1 field director.

"It includes the largest appropriation for new dams in California’s history that will benefit these corporate farmers who refuse to fund the dam projects themselves. Prop 1 will drive California and its taxpayers even further into debt for illusory and largely bogus ‘environmental benefits’. Prop. 1 shifts the financial burden from those who directly benefit from building new dams to the taxpayers," said Barrigan-Parrilla.

These groups are making large contributions as an investment to make sure that their pet projects are passed through the California Water Commission, according to Prop. 1 opponents.

“Prop. 1 will not ‘save water’ as Gov. Brown claims in ads paid for by these special interests. It’s a boondoggle to enrich his big ag contributors,” said Barrigan-Parrilla.

The campaign against the measure is led by Vote NO on Proposition 1, a grassroots coalition of fishermen, environmental groups, consumer organizations, two Indian Tribes, family farmers and Delta water agencies.

Bill Jennings, Executive Director of the California Sportfishing Protection Alliance, summed up why it is so important for people concerned about the future of salmon, the Delta and California to vote against the water bond: "Prop. 1 is a poster-child of why California is in a water crisis: it enriches water speculators but accomplishes little in addressing the drought, solving California's long-term water needs, reducing reliance on The Delta, or protecting our rivers and fisheries."

Save the American River Association urges No vote on Prop. 1

Are you still not convinced yet on how to vote on Proposition 1? Well, the Save the American River Association (SARA) Board of Directors has compiled a handy list of reasons of why everybody who cares about the future of fish, rivers, the environment, the economy and the people of California should vote NO on the water bond:

• Prop. 1 does nothing to address drought relief in the near future.

• Prop. 1 adds $7.12 billion to California's debt, debt that will cost taxpayers $14.4 billion when the principal and interest is paid.

• Prop. 1 dedicates only 13% of its funding for conservation, stormwater capture and treatment, and recycling.

• Prop. 1 allocates $2.7 billion for three dams that would increase the state's water supply by only 1%. The money would flow under the provision that allows "continuous funding," meaning there would be no legislative oversight. A number of dam projects that had been abandoned because of low water yield or would not be cost-effective are now being revived.

• When the State Water Project was approved in 1960, it provided that beneficiaries of water projects -- not taxpayers statewide -- would pay for new projects. Prop. 1 reverses that principle. Taxpayers would pay the lion's share of new projects. Taxpayers, for example, would pay 73% of the cost of the proposed Temperance Flat Dam on the San Joaquin River while the beneficiaries -- agribusiness and the City of Fresno -- would pay most of the balance.

• Prop. 1 requires taxpayers to buy water the public already owns to protect fish. It's a retread of programs in force for years that allow speculators to reap huge profits by selling the public's water back to the public. And it will have the additional impact of making more water available to export from the Delta.

• Prop. 1 does nothing to address factors that have worsened the water crisis in California during the current drought: the overdrafting of major reservoirs in Northern California, inequitable distribution of limited water supplies and the failure to balance the Public Trust.

• Prop. 1 contains $1.5 billion for "conservancies" without any language governing how the money is to be spent. Nothing would prevent the conservancies from spending the money on projects that have no impact on water supplies such as bike trails or administrative costs. Critics are calling it "pork."

• Promoters of Prop. 1 note that about 6.9% of the bond will spent to provide safe drinking water and clean water programs to disadvantaged communities. That long overdue initiative should have been presented to the voters years ago as a stand-alone proposition. It is shameful that California government has never addressed the water problems of disadvantaged communities.

For more information on Proposition 1, go to: http://www.noonprop1.org
Add Your Comments
LATEST COMMENTS ABOUT THIS ARTICLE
Listed below are the latest comments about this post.
These comments are submitted anonymously by website visitors.