Add an Event
Newswire
Calendar
Features
Home
Donate
From the Open-Publishing Calendar
From the Open-Publishing Newswire
Indybay Feature
Publish to Newswire
Add an Event
Related Categories: Palestine | Santa Cruz Indymedia | Anti-War
Santa Cruz Activists Continue Die-ins to Protest Atrocities in Gaza
by Alex Darocy (alex [at] alexdarocy.com)
Wednesday Aug 6th, 2014 5:14 PM
On August 4, activists in downtown Santa Cruz staged a second die-in as part of their ongoing protest of Israel's attacks on Gaza. The demonstrations have been organized by a coalition of community members and local anti-war organizations, including the Palestine-Israel Action Committee and Jewish Voice for Peace Santa Cruz. An announcement described the demonstration as a chance to speak out against, "Genocide, Apartheid, Colonialism, Ethnic Cleansing, and U.S/Israel Imperialism." A third die-in has been planned for Monday, August 11, beginning with a rally at the Town Clock at 5pm. 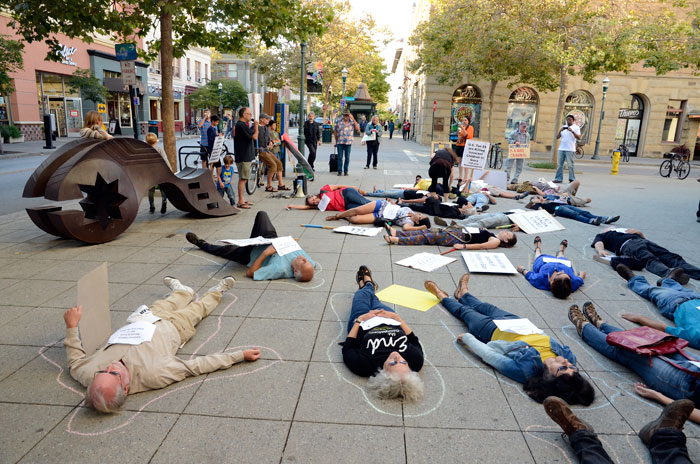 At the Town Clock on August 4, the names of Israelis and Palestinians killed in Gaza were suspended on name cards. Many of those in attendance were also wearing the cards pinned to their clothing. Community members then marched down Pacific Avenue to the Cooper House, and after the name on the card they were wearing was read aloud, individuals would then take a place on the sidewalk and join the die-in.

Downtown shoppers passing by stepped around the motionless protesters on the sidewalk as other members of the group outlined the bodies in chalk. As this was taking place, an organizer read the names of Palestinian children killed since Israel's attacks began on July 8. 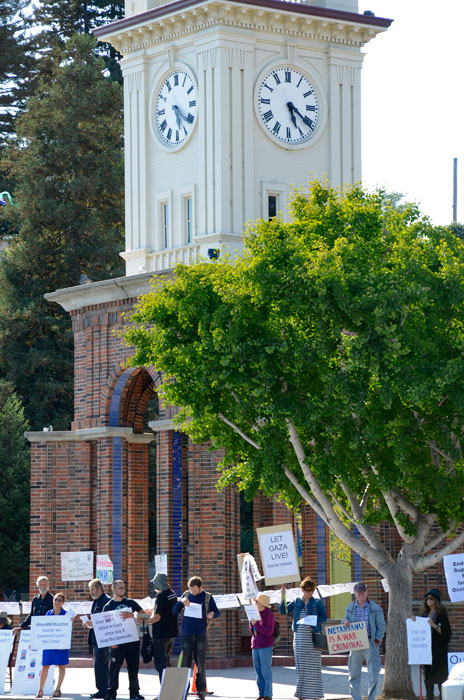 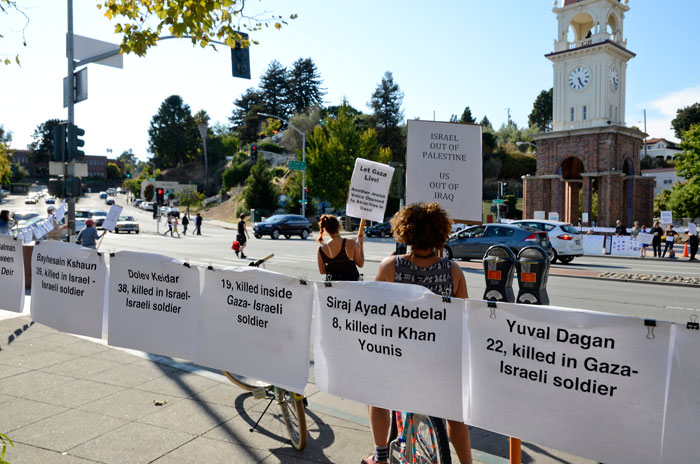 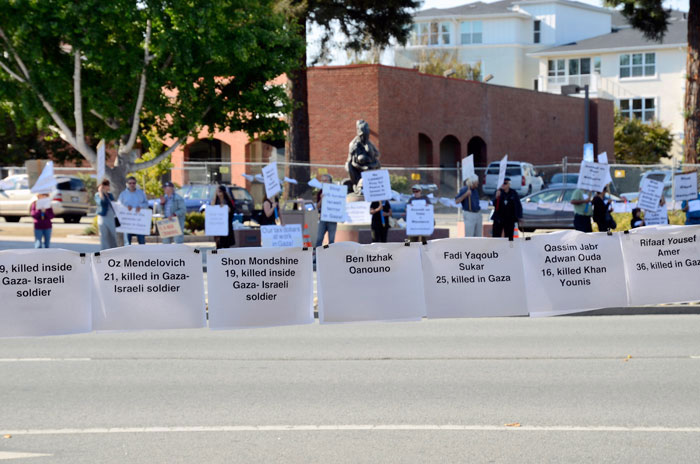 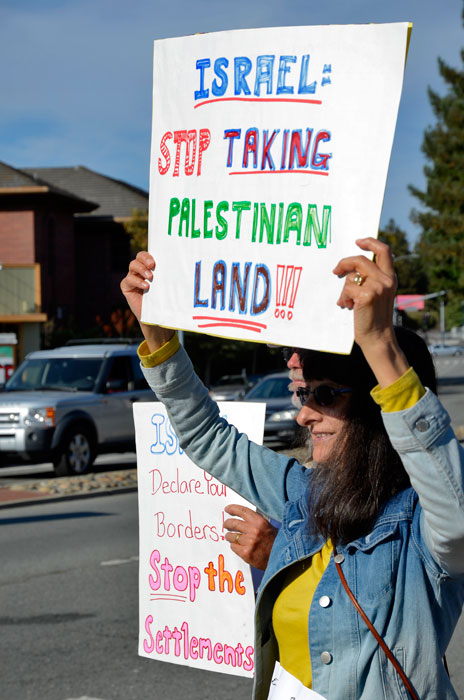 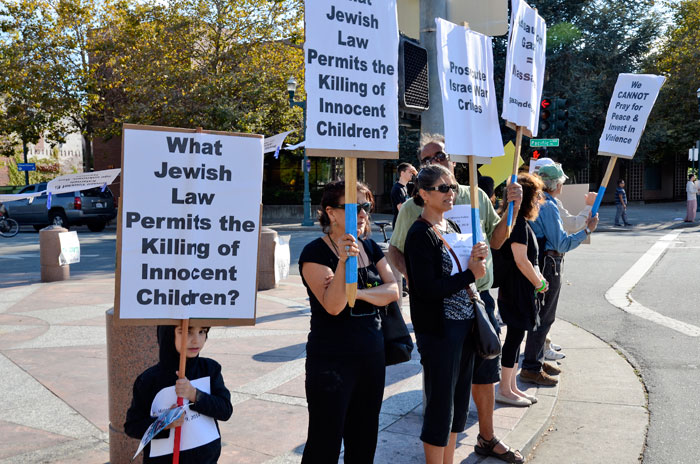 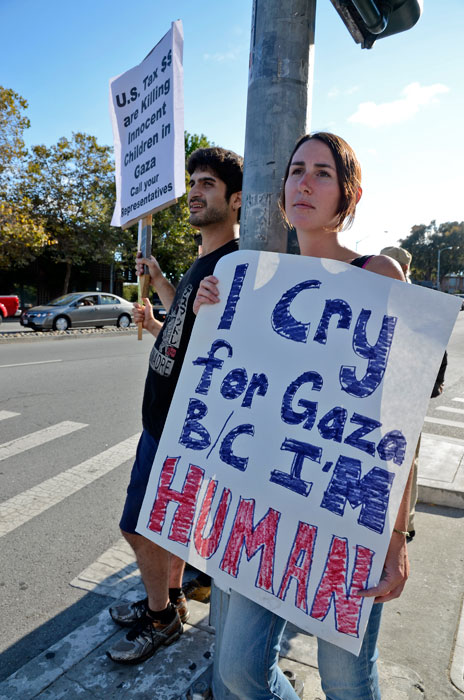 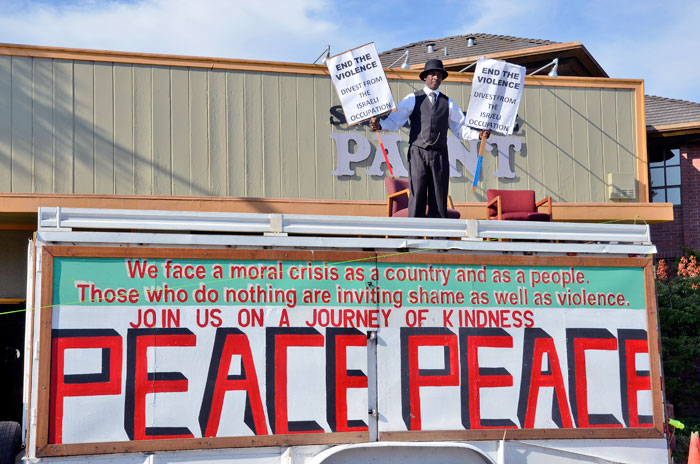 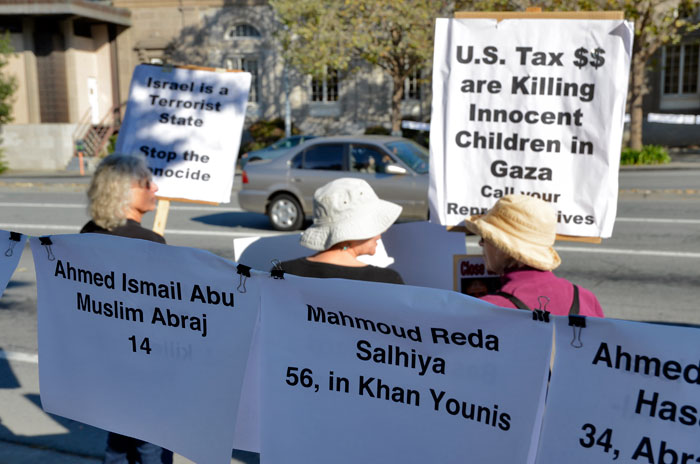 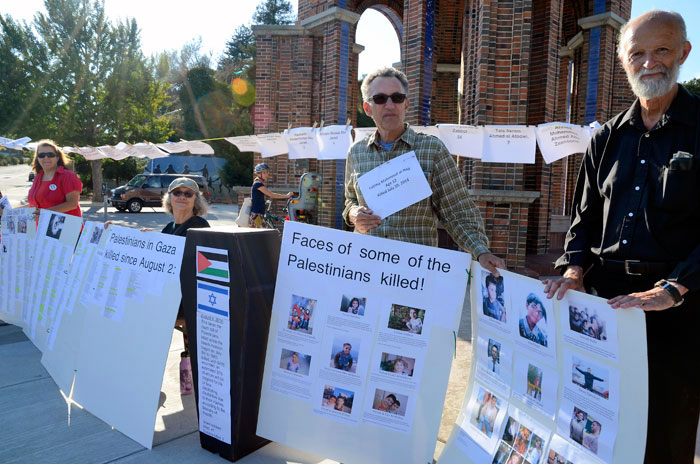 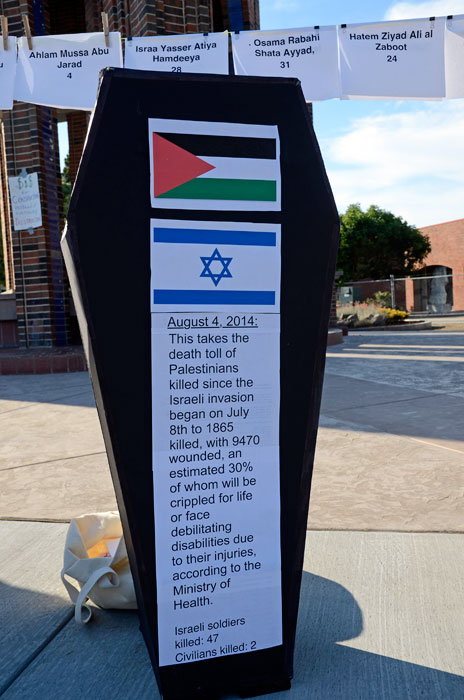 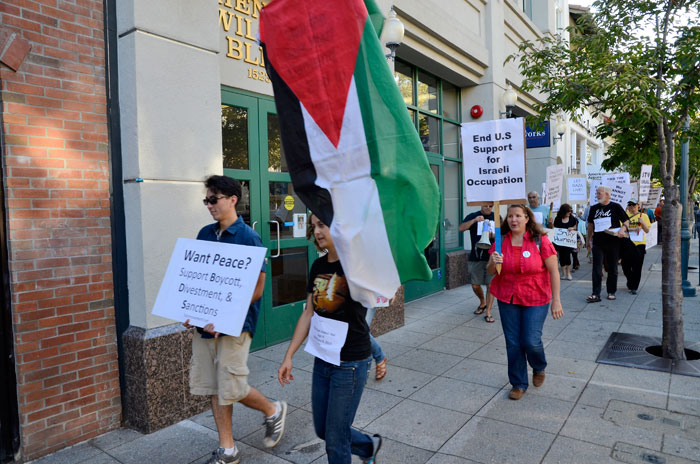 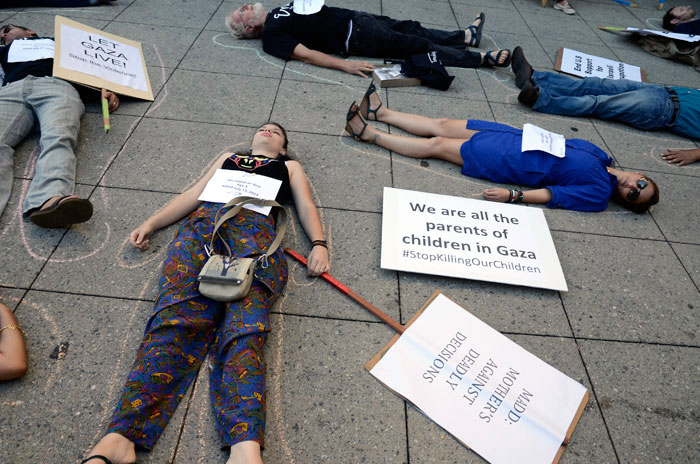 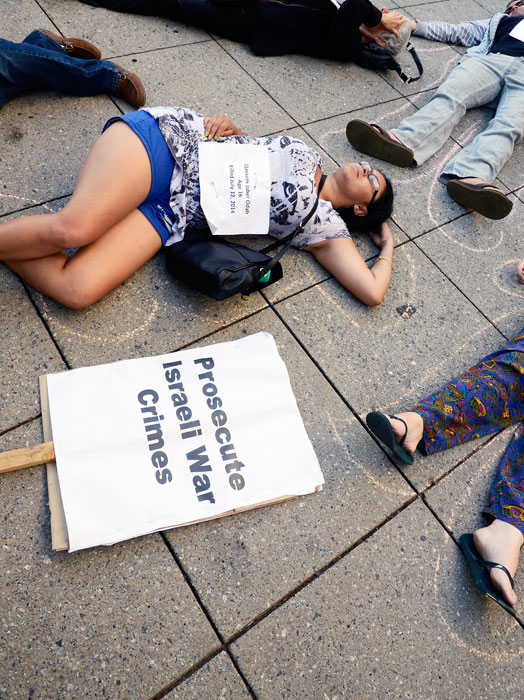 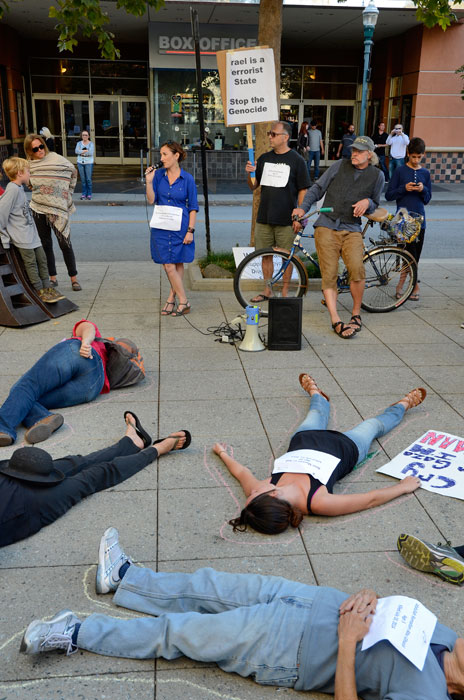 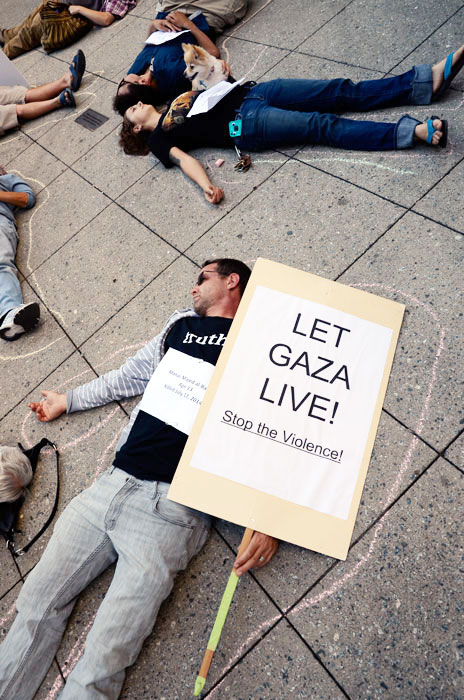 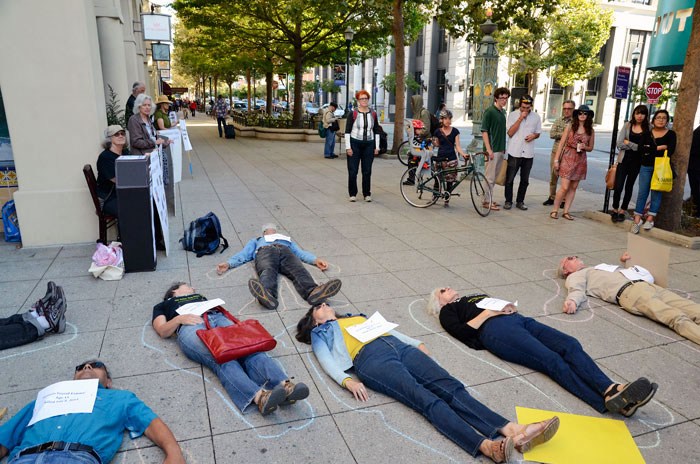 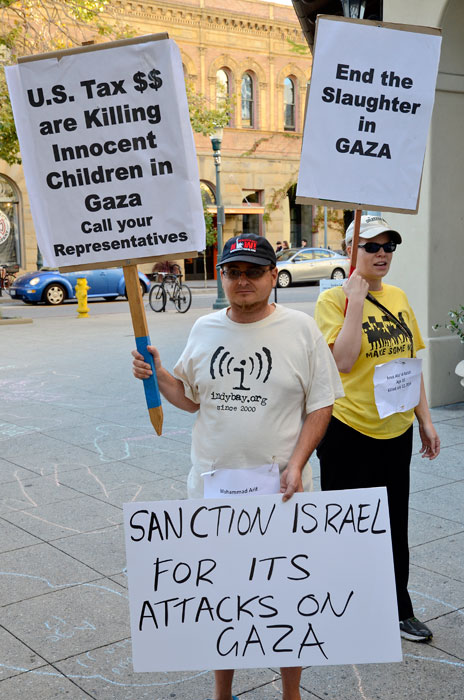 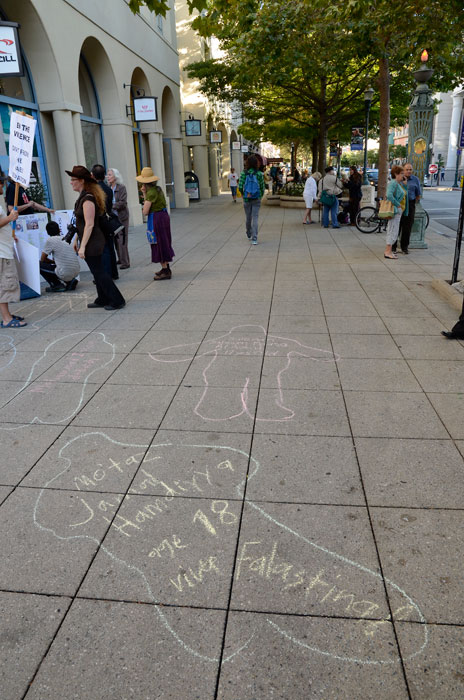