by Dan Bacher
“It is as if the Secretary of Transportation said let’s forget about automobile seat belts, airbags and antilock brakes and spend the savings on ambulances,” said Hoopa Valley Tribe Chair Danielle Vigil Masten. “The problem is that the ambulance may or may not get to a crash scene in time, and when it does arrive, the crew will have to deal with far more serious injuries.”

Photo of the Trinity River courtesy of the Hoopa Valley Tribe. 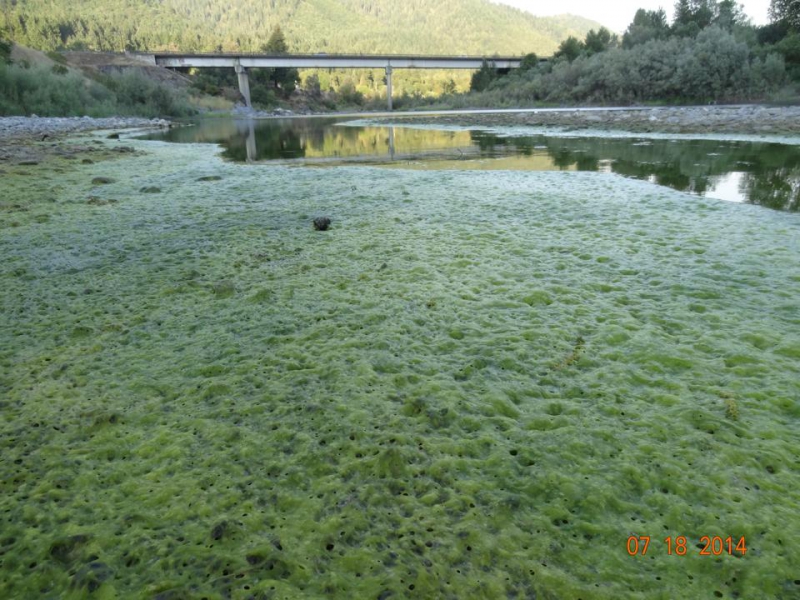 In September 2002, Dan Carter, fishing guide, called to tell me that a massive fish kill was taking place on the lower Klamath River. He soon turned the phone over to Walt Lara, Yurok Tribal Elder, who emphasized the scope of the disaster unfolding at the time.

"The fish kill is a lot worse than everybody thinks," said Lara, then the Requa representative to the Yurok Tribal Council. "It's a lot larger than anything I've seen reported on the TV news or in the newspapers."

“The whole chinook run will be impacted, probably by 85 to 95 percent. And the fish are dying as we speak. They're swimming around in circles. They bump up against your legs when you're standing in the water. These are beautiful, chrome-bright fish that are dying, not fish that are already spawned out,” the shaken Lara told me.

An estimated 68,000 fish perished in the largest kill of adult salmon in U.S. history, spurred by low, warm water conditions resulting from Vice-President Dick Cheney’s intervention in the development of a 10-year water plan for the Klamath. (http://www.counterpunch.org/2007/07/16/cheney-and-the-klamath/)

Twelve years later, the potential for another fish kill looms over the Klamath River- this time under the Obama administration.

Secretary of the Interior Sally Jewell on Wednesday, July 30 rejected pleas by Indian Tribes, scientists and river communities in the Klamath Basin to release water to protect migrating adult salmon from a potential major fish kill in the low, warm conditions caused by a historic drought.

Bureau of Reclamation officials said they would release extra water into the Trinity and Klamath rivers only once salmon start dying from disease, but not before.

"Just a week after California officials reported salmon deaths in the Klamath basin, Bureau of Reclamation officials announced that Secretary Jewell has decided to roll the dice," the Hoopa Valley Tribe said in a statement. "She will continue to divert water to irrigation uses and set aside the senior rights to water under federal and state law for Trinity and Klamath River salmon."

In a recent fish survey on the Salmon River, a major tributary of the Klamath, volunteers counted 55 dead adult spring Chinooks and 300 to 400 dead juveniles. A total of 690 live adult spring Chinooks were counted in 90 miles of river, mostly in cold pools fed by springs or at the mouths of colder tributaries.

The fish deaths resulted from high water temperatures and low water conditions. Water temperatures on the main stem of the Salmon River are now 76 to 78 degrees, according to Sara Borok, California Department of Fish and Wildlife environmental scientist.

In light of the warm and low water conditions, tribal officials are very concerned about another fish kill like the one that occurred in September 2012 taking place if the water is not released. The Hoopa Valley and Yurok Tribes have fisheries on the Klamath River and its largest tributary, the Trinity River. Those rights are protected by federal law and held in trust for the tribes by the United States.

“The Secretary is betting that if fish start dying she can make an emergency release of water to provide relief,” said Mike Orcutt, Hoopa Valley Tribe Fisheries Director. “But our scientists say that water wouldn’t reach the fish for 4.5 days and once disease appeared in 2002, up to 70,000 adult salmon were dead within days.”

In prior years, including 2012 and 2013, the Secretary released water to create water conditions for safe migration of salmon. In 2013 Central Valley Project contractors, led by the Westlands Water District, filed suit to block flow releases. "The court rejected their claims, water flowed, and there was no fish kill," the Tribe said.

However, this year the Secretary abandoned this science-based, field-tested flow release fish protection measure that is widely recognized as "prudent and necessary," according to the Tribe.

“It is as if the Secretary of Transportation said let’s forget about automobile seat belts, airbags and antilock brakes and spend the savings on ambulances,” said Hoopa Valley Tribe Chair Danielle Vigil Masten. “The problem is that the ambulance may or may not get to a crash scene in time, and when it does arrive, the crew will have to deal with far more serious injuries.”

Council Member Ryan Jackson stated, “We have made numerous trips to Washington, D.C. and Sacramento visiting with Congressmen, Senators, Interior Department officials, White House representatives and countless staff. We are extremely disappointed in the wide gulf between the Administration’s statements professing commitment to Indian trust responsibility and respect for Indian Tribes, and the federal actions that are taking our trust resources to the brink of destruction. That is no way for a trustee to act.”

“The law of the Trinity River has been set aside by the Secretary’s decision; in its place she has put the risk of catastrophe entirely on us and Trinity Basin communities, in order to cater to politically favored interests,” said Masten.

These politically favored interests include the Westlands Water District, which represents corporate agribusiness operations irrigating toxic, drainage impaired land on the west side of the San Joaquin Valley, and Stewart Resnick of Paramount Farms in Kern County, the largest grower of orchard fruit in the world.

Matt Maucieri, acting public affairs officer with the U.S. Bureau of Reclamation, responded to the Tribe's statement by saying, "This is a difficult decision that has been brought on by extremely dry conditions in these river basins this year."

"We will work closely with the Yurok, Hoopa Valley and other tribes in the basin, as well as with the Fish Health Center that is part of the U.S. Fish and Wildlife Service," Maucieri said. "While we have made the decision to not release preventive flows, we will work with all parties to monitor fish health and we are prepared to make emergency releases in the event that certain criteria are met."

Congressman Jared Huffman (D-San Rafael) issued a statement criticizing the Bureau's decision to withhold water releases on the Trinity River needed to prevent a repeat of the 2002 Klamath fish kill:

“The U.S. Bureau of Reclamation’s decision today to withhold water releases needed to prevent a repeat of the 2002 fish kill in the Lower Klamath River is the latest example of how the federal government fails to plan for drought to the detriment of tribes, fishermen, and the environment.

Even now, Reclamation continues to divert Trinity River water to the mismanaged Sacramento River system and has drained Trinity Reservoir so there is virtually no available water to protect salmon in the Trinity or Klamath rivers. By state law, Trinity River salmon – which begin their upstream migration in the Klamath River – must be protected before water is used to bail out the Central Valley Project. When you find yourself in a hole, you’re supposed to stop digging, but Reclamation has dug itself a hole it cannot get out of, and tribes and fishermen may once again pay the price.”

Interior Secretary Jewell's decision to not release water for salmon occurs as the Brown and Obama administrations continue to fast-track the biggest, most expensive and most environmentally destructive project in California history, the Bay Delta Conservation Plan (BDCP) to build the peripheral tunnels. The completion of the $67 billion tunnel plan will hasten the extinction of Sacramento River Chinook salmon, Delta smelt, longfin smelt and other fish species, as well as imperil the salmon and steelhead populations of the Trinity and Klamath Rivers.

Restore the Delta (RTD) and an array of anti-tunnel groups held a news conference and big rally at the State Capitol on Tuesday, July 29, to submit tens of thousands of public comments opposing the massive project and call for a new Draft Bay Delta Conservation Plan (BDCP) Environmental Impact Report/Environmental Impact Statement (EIR/EIS). The BDCP opponents charged that the EIR/EIS process has been fatally flawed due to its lack of public outreach to non-English speakers, failure to present a funding plan, exclusion of any non-tunnels alternative, and scientists’ identification of numerous “red flags.” For more information about the campaign to stop the twin tunnels, go to http://restorethedelta.org