Add an Event
Newswire
Calendar
Features
Home
Donate
From the Open-Publishing Calendar
From the Open-Publishing Newswire
Indybay Feature
Publish to Newswire
Add an Event
Related Categories: Central Valley | U.S. | Immigrant Rights | Labor & Workers
A Farm Worker Union Emerging in Whatcom and Skagit Counties
by repost from karani
Saturday Jun 28th, 2014 7:49 AM
“There is no organization out there or anybody that can offer us protection, so we have to do it ourselves.” 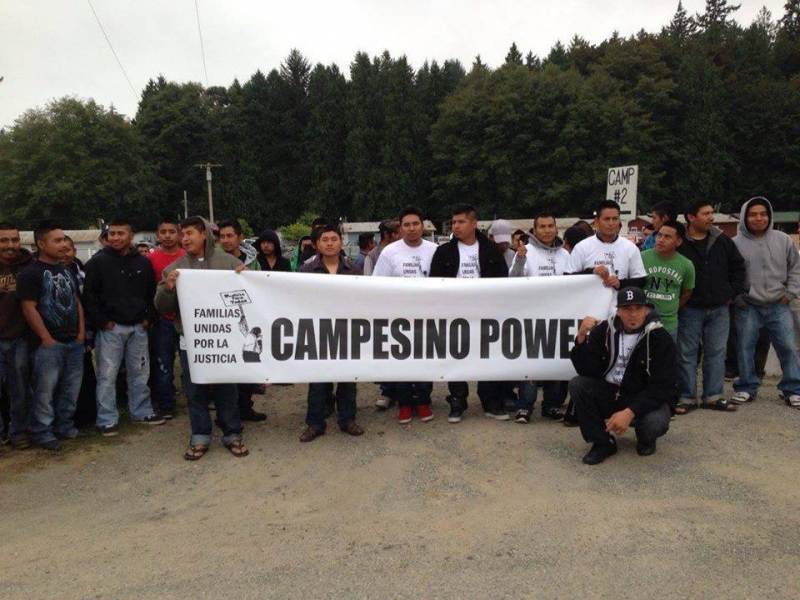 original image (960x720)
To all farm worker supporters, food activists, partners and to our beloved community:

As a farm worker justice organization that has acted as a key structural support to farm workers in our region, we would like to address a few issues that have come up regarding a group of farm workers who, for over a decade have picked berries at Sakuma Bros. Farms, Inc.

These comments are from the ground up, from the fields of greater Washington where we, the leadership team of Community to Community Development have lived, worked, suffered, serviced and organized, with our families over several generations. What we see unfolding in Whatcom and Skagit County is thus a multi-generational, multi-dimensional and multi-cultural movement that is currently being led by indigenous farm workers, Mixteco and Triqui migrant berry pickers who have settled along the West Coast Circuit.

Community to Community Development’s leadership team, made up of theologians, organizers, cultural workers, public intellectuals, social workers, educators, lawyers, healers, and parents; all have campesino backgrounds and farm worker roots. Some of us worked in the fields as children, some of our families still work in the fields, and all of us have deep personal relationships with local farm worker families. Our identity includes being farm workers and our understanding of Autonomy draws us back to the land as the only viable way to secure a sustainable future, by being in control of our own access to healthy and nutritious food and the way of life that makes us who we are. Though we are professionals, we are only a step or two removed from the situation that the Triqui and Mixteco farm workers have revealed to us over the last 11 months. These experiences were familiar to us, we too had lived them, but the major difference is that today we have each other.

To put it simply, we are partners and compañera/os who share common experiences. We are family in undoing that legacy of violence that we have inherited. In exerting our dignity, we act in total and complete solidarity.

The reason there is an ongoing boycott, the reason there were strikes last year, and the reason that the farm workers from Sakuma Bros. Farms, Inc. are remaining united and forming a union is precisely because of what Felimon Pineda observed in the epigraph above, “there are no existing organizations that can protect us, so we have to do it ourselves.”

It is in this epiphany that we have to be responsible for our own destinies, that farm workers in Washington State, ourselves included, have lost our fear in the face of oppression. It is also in that realization and through our actions to stop injustice that we have found one another.

What is a Union?

The question that neither grower, nor the general community seem to understand or agree upon is what is a union?

This is a very good sign, as the question is not whether or not a union is necessary, we believe it is, but instead whether or not Familias Unidas por la Justicia has the right to exist and to represent farm workers.

There no federal governmental regulations on farm labor because agricultural laborers are exempt from National Labor Relations Act (NLRA) protections, by extension they are also not governed by NLRA regulations.

In Washington State, there currently exists at least one farm worker union contract overseen by the United Farm Workers of America at Chateau St. Michelle and Columbia Crest wineries in eastern Washington’s lower Yakima Valley. Farm workers there have raised their earning potential to upwards of $70,000 a year, have a health plan, seniority and retirement packages and business has boomed for the agricultural corporation since 1995.

This contract was made possible by RCW §49.32.020 or Washington’s Little Norris-LaGuardia Act, and there have been legal cases for a farm worker’s right to organize into unions.

The fact that nobody knows what a union is, and even less that farm workers have a legally protected right to organize into unions in Washington State only serves to demonstrate the power imbalance that has existed in agricultural labor in the United States and most importantly Whatcom and Skagit Counties.

Even the Skagit Valley Herald, which has covered the Sakuma Bros. Farms labor dispute in favor of the grower, published a recent political cartoon that highlighted this imbalance of power. What is depicted is a situation that most of us as farm workers are very familiar with, sitting across the table from the corporate grower’s management team as an individual trying to assert protections that should already be guaranteed by law.

Having farm workers exercise their dignity is not a bad thing, when we do we are not being arrogant, and to say that we are not entitled to at the very least the lowest standards of existing labor laws is akin to slave owners calling their slaves “uppity” for asserting their dignity. This attitude in our community requires a cultural shift away from the internalization these oppressive messages that we, as farm workers, are not worthy of basic human rights.

Familias Unidas por la Justicia has demonstrated the courage it takes for farm workers to demand change. The strikes, the boycott and lawsuits have been the only avenue left open to them to defend themselves from further exploitation, abuse, substandard living conditions, and from being displaced by H-2A workers for their activities. And yes for creating more opportunities for their children and future generations.

Past negotiations without a union are akin to the image above, an individual taking on a corporate team. Federico Lopez did this last year, and he was fired and evicted. This injustice is what catalyzed his co-workers to band together to demand his return. The difference between this and last year’s negotiations by Familias Unidas por la Justicia is that there were 11 farm workers and two witnesses who negotiated across the table from Sakuma Bros. Farms management team, anti-labor consultants and legal team instead of one. The balance of power is still off, yet we have demonstrated that we have a fighting chance for justice.

Unionization is a Process

The formation of this farm worker union, Familias Unidas por la Justicia, started a year ago and it’s not over yet.

There is no official certification process for a union, labor unions are formed by workers, it would be a violation of the first amendment if the Government tried to “certify” the formation of unions-the formation of labor unions is a right of the people in the Constitution. It is the freedom of association.

Recently there was a unanimous vote of the North West Washington Central Labor Council delegates to recognize Familias Unidas por la Justicia as a member with President Ramon Torres as a new delegate and Vice President Felimon Pineda as an alternate. This is a major benchmark for the emerging farm worker union. Torres and Pineda attended their first meeting in June 2014. It was a proud moment for all.

If you want to know if Familias Unidas por la Justicia is a union, ask other unions.

This is why the Washington Farm Bureau, an industry advocacy organization that has at its disposal at least $18 million according to Dun and Bradstreet 2013, has stepped in to try to kill the official formation of this farm worker union in reaction to Familias Unidas por la Justicias success in defending their rights in court.

In the end the question you need to ask yourself is whose side are you on?

Can people support farm workers without taking a side?

Are you on the side of an equitable local family farming system that is sustainable environmentally and socially, or do you believe that the only viable agricultural system is a corporate bureaucratic system that imports H2A workers and exploits farm worker families for profit?

The work we have to do in our community is to put our heads together to figure out a 21st century agricultural system that is equitable. The present struggle is to support the worker’s struggle for a fair contract that addresses their unique needs. What kind of food do you want to feed your family?

As an organization, we stand by the statement that Rosalinda Guillen wrote in the midst of the struggle on July 26, 2013, as long as farm workers are willing to stick their neck out for justice, we will always have their back. 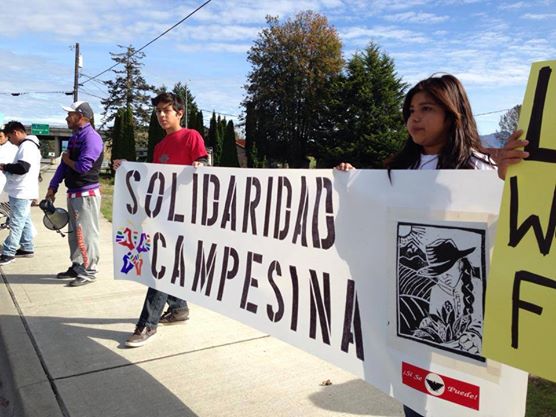 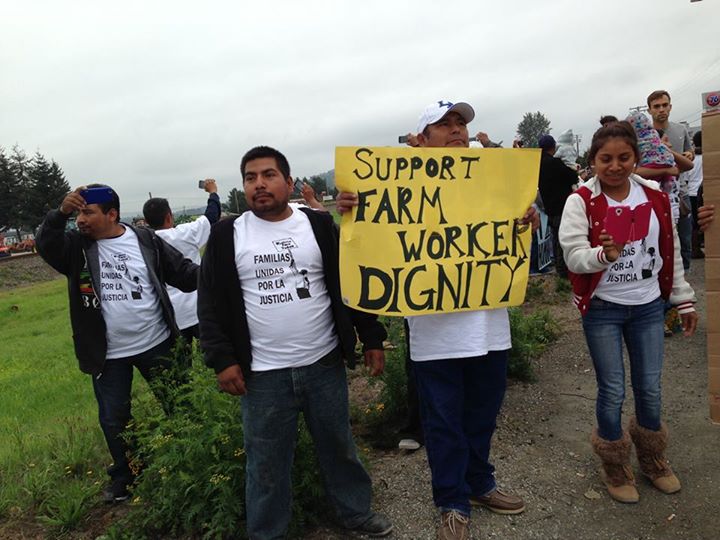 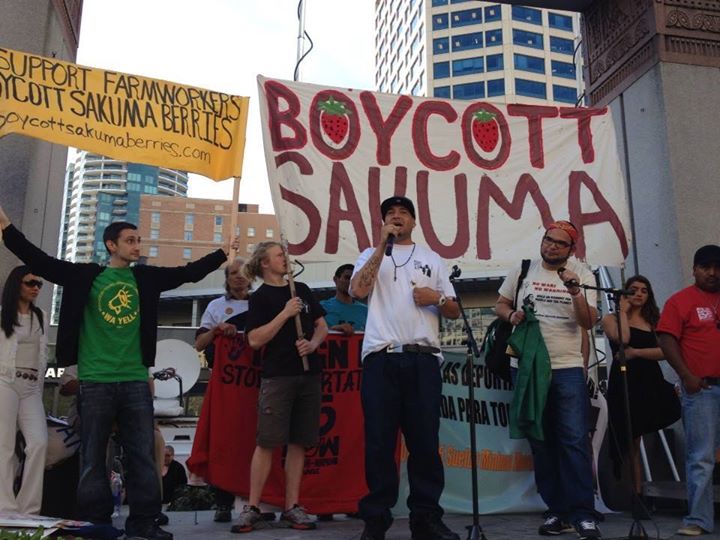 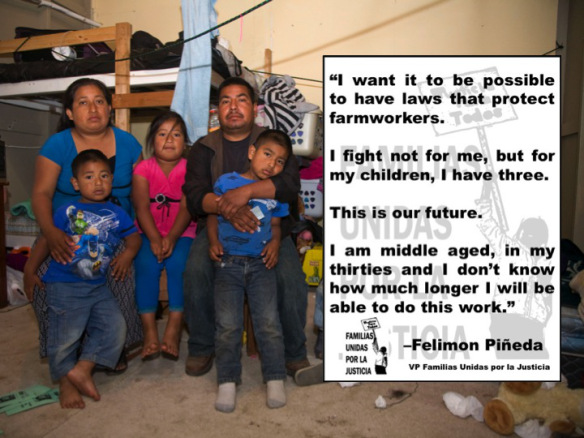 http://karani.wordpress.com/2014/06/27/a-f...
Add Your Comments
Support Independent Media
We are 100% volunteer and depend on your participation to sustain our efforts!