Newswire
Calendar
Features
Home
Donate
From the Open-Publishing Calendar
From the Open-Publishing Newswire
Indybay Feature
Publish to Newswire
Add an Event
Related Categories: California | Central Valley | Environment & Forest Defense | Government & Elections
Tunnel opponents slam incomplete BDCP Implementing Agreement
by Dan Bacher
Friday May 30th, 2014 6:09 PM
"There is no financial plan or agreement," said Barbara Barrigan-Parrilla, executive director of RTD. "There is no operations plan. The Brown Administration has rushed ahead to plan construction for the water-takers, but has no clear plan for paying for the required Delta restoration." 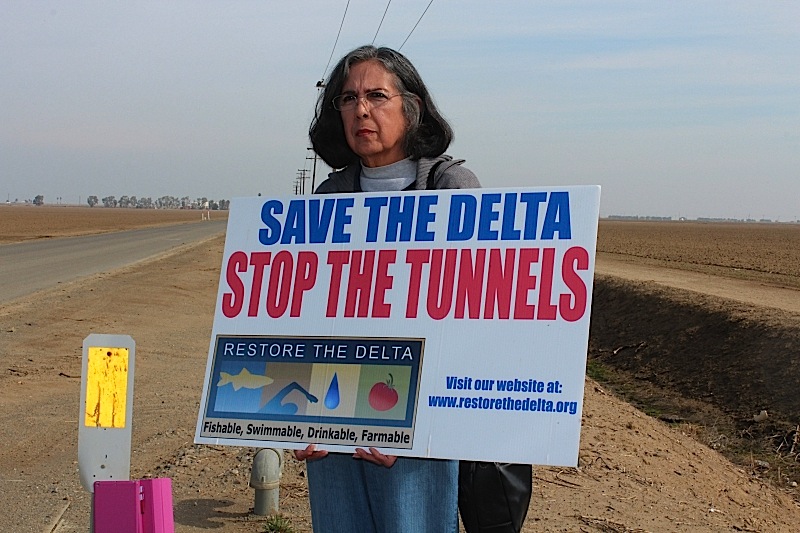 Resources Agency says documents won't be translated into other languages

The lead state and federal agencies for the Bay Delta Conservation Plan (BDCP) to build the peripheral tunnels released the draft Implementing Agreement for the project today, drawing criticism by tunnel opponents that the agreement contains no financial plan or agreement.

Karla Nemeth, Deputy Secretary for Water Policy at the Resources Agency, said, "Today we are announcing that we are extending the public comment period for the BDCP and the EIR/EIS by 45 days to July 29. This is in response to several requests that we received over the last several weeks from various interest groups and folks who were looking to have an opportunity to review the conservation plan and the EIR/EIS in context with what’s called an Implementing Agreement for the Bay Delta Conservation Plan."

"We are also releasing that for public review today. It’s a 60-day public review period such that all documents on the Bay Delta Conservation Plan, their public review and comment period will close on July 29," she explained.

Restore the Delta (RTD), opponents of Governor Jerry Brown’s rush to build the Peripheral Tunnels to drain the Delta and doom sustainable farms, salmon and other Pacific fisheries, today criticized the “incomplete” Implementing Agreement (IA) that lacks commitments from water exporters to make their financial payments, and contains no plan for operating the huge project.

The plan contains no federal or state financing commitment to mitigate the damage of the project and provide for the required habitat restoration, according to RTD.

“There is no financial plan or agreement," said Barbara Barrigan-Parrilla, executive director of RTD. "There is no operations plan. The Brown Administration has rushed ahead to plan construction for the water-takers, but has no clear plan for paying for the required Delta restoration."

"The Implementing Agreement has only been released to the public after the public comment period on the BDCP and its EIR/EIS is nearly complete. They plan to use taxpayer-funded state bond monies to mitigate the damage, but we assure you that we will campaign to defeat any state bond measure that aids construction of these tunnels that will sound the death knell of the SF Bay-San Joaquin Delta and estuary. These tunnels mainly benefit a few hundred industrial mega-growers growing permanent crops for export on unsuitable land with subsidized water," she explained.

RTD noted that the Federal CVP Contractors are already falling behind in payments - and that is just during the planning phase. The BDCP’s own charts show funds will be exhausted by July 2014. The Westlands Water District is not keeping up with its payments, the group stated.

“Without clear financing commitments, the taxpayers and water bill payers of California will get stuck with most of the bill, while getting no new water,” said Barrigan-Parrilla.

The implementing agreement is available at: http://baydeltaconservationplan.com/Libraries/Dynamic_Document_Library/Draft_Implementing_Agreement_5-30-14.sflb.ashx

Unfortunately, if you're a non-English speaker, you won't be able to read the BDCP documents. In spite of the fact that 20 percent of Californians are non-English speakers, neither the BDCP itself, the BDCP EIS/EIR or the Implementing Agreement will be translated into languages other than English.

In response to my question of whether or not any of the documents would be translated into languages other English, Richard Stapler of the Natural Resources Agency told reporters at a news conference today that the cost of translation would be "prohibitive" and questioned whether it would be possible to translate some of the technical language:

"We’ve had the comment period open for BDCP now for just about six months. We’re extending it now for another two months, so of course we appreciate that input this late in the comment period on this issue. That said, for the entire time and for the entire process, we have actually have had an 800# where all of those languages, people can ask questions in all of those languages and get answers.

There is a prohibitive cost associated particularly with translating technical language, if it’s even possible to translate some of that technical language, so that is a significant issue. But we are extremely sensitive to those populations and any suggestion otherwise is more just political rhetoric than anything else.

So we do have some materials that are available in different languages. We are currently translating some other fact sheets and such for those populations, making extra additional well above and beyond what is necessary under CEQA to reach out to the groups that represent those communities to be sure that they are being properly educated and have the opportunity to ask questions about those impacts."

I then asked Stapler, "So you’re not going to translate either the IA or the BDCP documents?

A transcription of today's press conference is available at: http://mavensnotebook.com/2014/05/30/this-just-in-agency-officials-discuss-release-of-bay-delta-conservation-plan-implementing-agreement-and-extension-of-the-public-comment-period/

On Thursday, Restore the Delta and environmental justice advocates charged the Brown Administration with violation of the civil rights of more than 600,000 non-English speakers in the Delta by its agencies' failure to provide for “meaningful access to and participation” in the Bay Delta Conservation Plan (BDCP) public comment period.

The groups said the state and federal agencies failed to make the EIR/EIS available in any languages other than English. Restore the Delta, the Environmental Justice Coalition for Water, Asian Pacific Self-Development and Residential Association, Café Coop, Lao Family Community Empowerment, Environmental Water Caucus, California Sportfishing Protection Alliance, California Water Impact Network (C-WIN), and Friends of the River released a letter calling on State and Federal officials to restart and extend the public comment period for the BDCP and its EIR/S, and to do adequate public outreach to limited English speakers.

“In particular, we request that the agencies hold public hearings and provide interpreters; translate vital documents such as, at the very least, the Executive Summary of the draft EIS/EIR; and provide affordable access to documents to allow the thousands of low-income and limited English speakers to have meaningful participation in the process,” the letter stated.

"More than 600,000 Delta residents alone don't speak English, and are being shut out of the public comment process on this massive project that would affect them deeply," said Esperanza Vielma, executive director of Café Coop & Environmental Justice Representative, San Joaquin County/San Joaquin Valley Air Quality Board. "The Brown Administration is violating the civil rights of Limited English speaking Californians in its rush to build tunnels to serve the top 1% of industrial agriculture."