The agencies also released the draft Implementing Agreement for the BDCP today. The agreement is available here: http://baydeltaconservationplan.com/Libraries/Dynamic_Document_Library/Draft_Implementing_Agreement_5-30-14.sflb.ashx

The draft Bay Delta Conservation Plan and BDCP EIS/EIR and Implementing Agreement will not be translated into languages other than English, according to Richard Stapler of the California Natural Resources Agency. A coalition of fishing, conservation and environmental justice has requested the agencies to translate at least the Executive Summary into languages other than English. 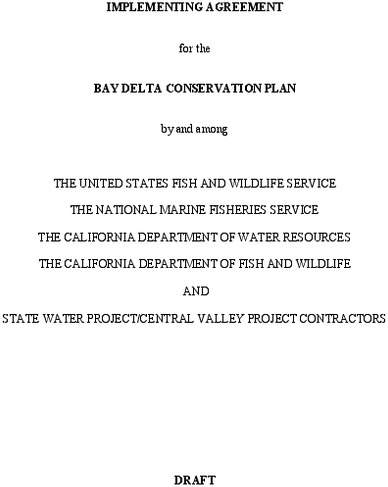 SACRAMENTO, Calif. — Lead federal and state agencies on Friday announced they have extended by more than a month the time available for the public to comment on the draft Bay Delta Conservation Plan (BDCP), so that a public comment period that would otherwise end June 13 will run to July 29. Time to comment officially on the BDCP draft Environmental Impact Report/Environmental Impact Statement also has been extended, from June 13 to July 29.

In addition, federal and state water and wildlife agencies today released a draft agreement that would govern implementation of the BDCP. Called an “Implementing Agreement,” the newly-released document will be available for public review for 60 days, until July 29. The draft agreement details roles and responsibilities of the various agencies under the BDCP.

The twin goals of the BDCP are to stabilize the delivery of water supplies to much of California from the Sacramento-San Joaquin Delta while also contributing to the recovery of threatened and endangered species in the region. Since 2006, BDCP proponents have been working to safeguard the Delta as both an ecosystem and water supply source for 25 million state residents and 3 million acres of irrigated farmland.

Both the draft BDCP and its corresponding environmental review documents were made available for official public comment on December 13, 2013. The public comment periods on both sets of documents have been extended twice.

The separate draft Implementing Agreement released today provides expectations, assurances and protections, and sets forth remedies and recourse should any party to the BDCP fail to perform its obligations. Parties to the draft agreement are the California Department of Water Resources, the California Department of Fish and Wildlife, certain contractors of the Central Valley Project and the State Water Project, the U.S. Fish and Wildlife Service, and the National Marine Fisheries Service.

In proposing to reconfigure how water is pumped from the Delta and to return relatively large parcels of the Delta to its original wetlands, the BDCP seeks to protect entire communities of plants and animals in the Delta on a sustained, landscape-wide level. The BDCP was drafted by the California Department of Water Resources (DWR) and the public water agencies that buy water pumped from the Delta by DWR's State Water Project and the U.S. Bureau of Reclamation's (Reclamation) Central Valley Project, with substantial input from Reclamation and state and federal wildlife agencies.

The BDCP seeks permits to cover operation of those water projects in compliance with the U.S. Endangered Species Act and the California Natural Community Conservation Planning Act (NCCPA). In order to issue the 50-year permits sought under the BDCP, the U.S. Fish and Wildlife Service and the National Marine Fisheries Service must determine, among other things, that the plan will not reduce the likelihood of survival and recovery of federally-protected species including Chinook salmon and Delta smelt. To issue permits under the NCCPA, the California Department of Fish and Wildlife must determine, among other things, that the BDCP adequately provides for the conservation and management of covered species and their habitat.

The NCCPA requires habitat conservation plans such as the BDCP to include an Implementing Agreement. The draft Implementing Agreement released today describes various parties' roles as they relate to implementation of the 22 conservation measures included in the BDCP. It describes how permits may be suspended or revoked by wildlife agencies in the event the water agencies fail to adequately fund or make progress on the implementation of conservation measures. It also describes the assurance that would be granted to the agencies funding the BDCP, in the event that permits are issued. Under the draft agreement, the permitting wildlife agencies would not require additional land, water or financial contribution beyond what is required by the plan.

The estimated cost of the BDCP is $25 billion. The majority of those costs would be paid by the public water agencies that buy water from the State Water Project and Central Valley Project. Potential sources of funding for the remainder of BDCP costs include bonds issued by water districts, bonds issued by DWR, federal agency appropriations, and state and federal grants.

As a federal agency, Reclamation must comply with the U.S. Endangered Species Act through a separate process.

There are two main elements to the draft BDCP now under public review: Construction of new intakes on the Sacramento River near Hood to ameliorate the unnatural flows now created by south Delta pumping plants, and protection or restoration of 140,000 acres of habitat, much of it tidal wetlands.

To review the draft BDCP, its accompanying draft Environmental Impact Report/Statement, and the draft Implementing Agreement, go to http://www.baydeltaconservationplan.com

Written comments on all documents may be submitted via mail or hand delivery to Ryan Wulff, National Marine Fisheries Service, 650 Capitol Mall, Suite 5–100, Sacramento, CA 95814, or email to BDCP.comments [at] noaa.gov

Comments on the Draft BDCP, associated Draft EIR/EIS, and draft IA must be received electronically or postmarked on or before July 29, 2014.